While the revised McDonald criteria of 2010 allow for the diagnosis of multiple sclerosis (MS) in an earlier stage, there is still a need to identify the risk factors for conversion to MS in patients with clinically isolated syndrome (CIS). Since the latest McDonald criteria were established, the prognostic role of cerebrospinal fluid (CSF) and visual evoked potentials (VEP) in CIS patients is still poorly defined. We conducted a monocentric investigation including patients with CIS in the time from 2010 to 2015. Follow-ups of 120 patients revealed that 42% converted to MS. CIS patients with positive oligoclonal bands (OCB) were more than twice as likely to convert to MS as OCB negative patients (hazard ratio = 2.6). The probability to develop MS was even higher when a quantitative intrathecal IgG synthesis was detected (hazard ratio = 3.8). In patients with OCB, VEP did not add further information concerning the conversion rate to MS. In patients with optic neuritis and negative OCB, a significantly higher rate converted to MS when VEP were delayed. In conclusion, the detection of an intrathecal IgG synthesis increases the conversion probability to MS. Pathological VEP can help to predict the conversion rate to MS in patients with optic neuritis without an intrathecal IgG synthesis. 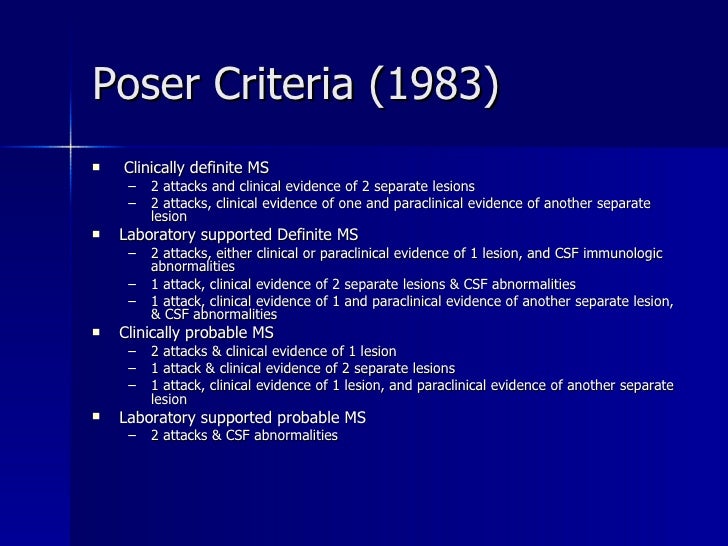 I’ve often asked myself the question if Ian McDonald (of the McDonald criteria) hadn’t been who he was (undoubtedly a leader in the field of MS) or an MRI aficionado, where would the diagnostic criteria for MS be now? This is not in any way a criticism of a great mind and visionary – I met Ian McDonald in Queen Square during my PhD, and he had an aura that simply shimmered.

Prominent leaders inspire great change; often for the betterment of society as a whole, but how many of these decisions are directly or indirectly based on intrinsic satisfaction?

One of the earlier derivations of the MS diagnostic criteria was the Poser criteria (see above), introduced in 1983 and had 94% sensitivity for MS versus post-mortem analysis. The criteria took into consideration the oligoclonal band (OCB) test and other paraclinical measures, which were subsequently dropped in the McDonald 2010 criteria. This decision to move forward with MRI as the sole deciding factor in MS diagnosis also has had some unforeseen knock on effects on MS research; for instance, research on MS histology and the CSF largely stagnated, as a result.

“Even in the presence of many lesions (> 10 or > 8), magnetic resonance imaging could not accurately rule multiple sclerosis in (likelihood ratio of a positive test result 3.0 and 2.0, respectively)” – Whiting P

Fast-forward more than a decade, and researchers such as Schwenkenbecher are re-evaluating this stance. They found that in those presenting with the initial demyelinating event (CIS), OCB and VEP both contributed separately to increasing the likelihood of recurrent demyelinating events. The usefulness of OCB test is demonstrated pictographically below. Conversion to MS was higher in those who were OCB+ (55%) than those who were OCB- (21%), and OCB+ individuals were twice as likely to convert to MS. Similarly, IgG synthesis (i.e. presence of antibodies) in the CSF was found in 66% of those who went on to develop MS. Now, if you look at the presence of immune cell activity in the CSF, it was present in 59% who later developed MS. Moreover, if you combined both baseline MRI and OCB findings together the sensitivity of the pick up for the future development of  MS increased to 65%. When it comes to abnormal findings on VEP following optic neuritis, in the absence of OCB positivity there was still an additional predictive value of VEP as far as conversion to MS at a future date was concerned.

We therefore stand a decade on, expectantly for those who develop the MS diagnostic criteria to take note of this and similar findings. In reality, I’m yet to see this happen. In the US, lumbar punctures are hardly preformed and yet we face a new era of B cell therapies – ocrelizumab, in particular, selected cases based on OCB positivity. The irony of this is that those who designed the study understood the value of having a positive OCB result. 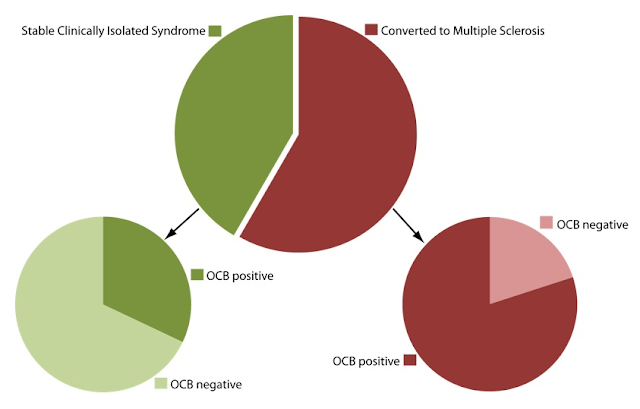