Fingolimod is an effective DMT which binds to the sphingosine-1-phosphate receptor on white blood cells. We don’t fully understand why it works in MS, but the most popular theory is that it traps lymphocytes inside the lymph nodes, preventing them from entering the blood and therefore from penetrating into the CNS. It may also have direct anti-inflammatory effects, protect the integrity of the blood-brain barrier, and (possibly) act directly in the CNS as a neuroprotective agent.

After people receive fingolimod, the number of B cells in the peripheral blood is suppressed. In addition, the B cells which remain in the blood are immature, so-called ‘transitional’ B cells. It is not fully understood how fingolimod does this, or whether this is relevant to the mechanism of benefit in MS.

BAFF is a signalling molecule involved in regulating the survival and proliferation of B cells. BAFF has received lots of attention in MS and other autoimmune diseaseas for a few reasons…

A new study investigated the relationship between BAFFlevels and B cell counts in response to fingolimod therapy. To do this, they first measured BAFF levels in the blood of 30 pwMS treated with fingolimod, 32 pwMS on no DMTs, and 25 healthy controls. Most of the people in the untreated group had never had DMTs (27/32) whereas 5 had had beta-interferon. The fingolimod-treated group had higher BAFF levels than both other groups. This suggested that fingolimod might increase BAFF levels in the blood. In support of a causal link, 3 people who had blood taken before and after fingolimod showed an increased in blood BAFF levels after starting treatment.

The authors then asked whether this increase in BAFF levels is related to changes in the numbers and types of B cells found in the blood after fingolimod treatment. Interestingly, BAFF levels were correlated with the total number of B cells. When these cells were looked at in a bit more detail, the authors found that increasing BAFF levels were associated with a shift in the relative make-up of these B cells: more BAFF was related to a higher proportion of transitional, immature B cells, and a lower proportion of memory B cells.

Here is a picture of the key graphs which I’ve rehashed: 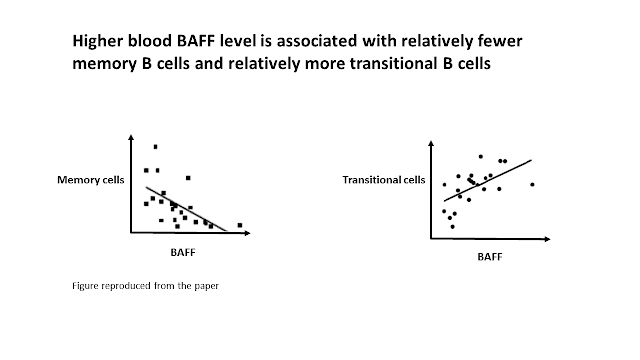 This study, for me, provides another important piece of evidence that BAFF is a master regulator of B cell pools in health, disease, and following administration of drugs, like fingolimod, which affect B cell numbers in the blood.

The emerging picture is that the body senses a decrease in the circulating B cell pool, aims to counteract this by producing more BAFF, and this subsequently leads to the release of transitional, immature B cells from the bone marrow, as we seen after B cell depletion therapy. The really interesting questions for me are
1) What is the sensor?
2) What is the key cell type (or types) responsible for producing BAFF in the body?

A better understanding of the relationship between BAFF and B cell pools will almost certainly improve our understanding of MS and other autoimmune diseases. As the atacicept nightmare tale shows us, hitting the BAFF axis can have a dramatic impact on disease activity. Knowing more about this axis will hopefully allow us to target BAFF in a way that benefits pwMS.

Patients with multiple sclerosis (MS) who are treated with fingolimod have an increased proportion of transitional B cells in the circulation, but the underlying mechanism is not known. We hypothesized that B cell-activating factor of the tumor necrosis factor family (BAFF) is involved in the process. Compared with healthy controls and untreated MS patients, fingolimod-treated MS patients had significantly higher serum concentrations of BAFF, which positively correlated with the proportions and the absolute numbers of transitional B cells in blood. Despite the elevated concentrations of BAFF in fingolimod-treated MS patients, serum levels of soluble transmembrane activator and calcium-modulating cyclophilin ligand interactor, and B cell maturation antigen were not elevated. Our results show that fingolimod induces BAFF in the circulation and expands transitional B cells, but does not activate memory B cells or plasma cells in MS, which is favorable for the treatment of this disease.