The eagles (ocrelizumab for RRMS and PPMS)  may have landed in Europe, but how often should the birds be used to kill cells in MS?

A view-point argues it’s too often and that it can be personalised and smart.  I agree but for different reasons…..

Avasarala J. Anti-CD20 Cell Therapies in Multiple Sclerosis-A Fixed Dosing Schedule for Ocrelizumab is Overkill. Drug Target Insights. 2017 Oct 25;11:1177392817737515.
Anti-CD 20 therapies have found significant uses in multiple sclerosis (MS). Based singularly on the accumulated evidence with the use of rituximab (RTX; Rituxan, Genentech, and Biogen) in neuroimmunological diseases, ocrelizumab (OCR; Ocrevus, Genentech) was developed as a treatment option for MS and selectively targets CD20 B cells, a cell surface antigen found on pre-B cells, mature, and memory B cells, but not on lymphoid stem cells and plasma cells. On the basis of indirect evidence, elimination of the antigen-presenting capabilities and antigen nonspecific immune functions of B cells appear to be central to the therapeutic efficacy of anti-CD20 B-cell therapies. An important question is this-Why does the drug need to be dosed at fixed intervals and not based on a measurable endpoint, such as tracking peripheral CD20 cell counts? There is minimal scientific validity in infusing the drug every 6 months particularly if CD20 cell counts are negligible in the peripheral blood. In this analysis, a case is made for following CD19 cell populations as a surrogate for CD20 cells on a monthly basis to guide OCR redosing parameters and does not follow a scheduled dosing parameter. Ocrelizumab is used every 6 months, but this study argues that this is too often and that it should be personalised based on monitoring CD19 positive B cells so if CD19 positive cells in an individual have not returned you should wait until your next dosing. This is personalised medicine.

Unfortunately there is often no insight provided to the action of ocrelizumab and this is because of the T cell MS world view and all too often the B cell is seen and shown as a single population. 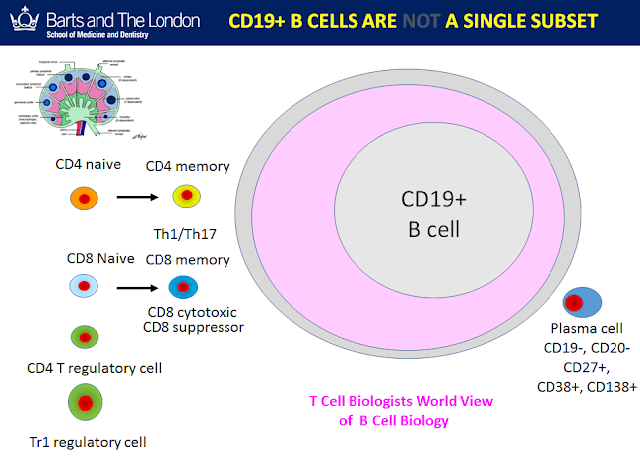 But once you realize this is not true…the pennies can drop (realise the true situation). 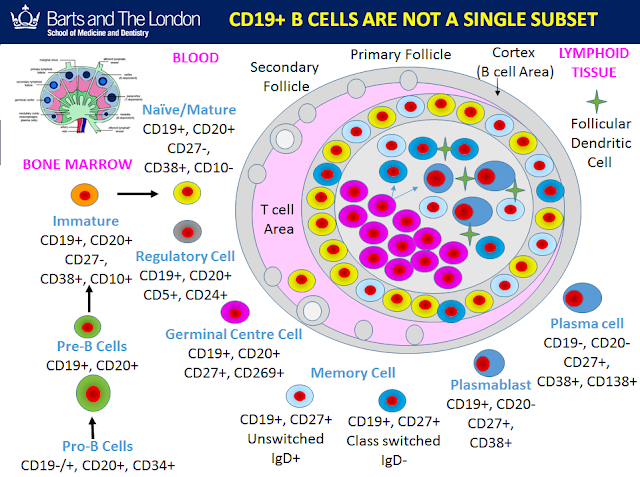 If you monitor this subset to determine retreatment it may become even more personalised and as these cells take a long long time to re-appear (months-years). Retreatment may be even less frequent. So should you dose every 6 months?


I suspect Pharma and Neuros will have their fingers in their ears going La, La, La, La, La in the response to the idea of personalised medicine…I could be wrong


They will give the drug every 6 months and they will follow the label.


This is what the data from the trials indicates them to do and that is the label.


However, if  we have a death (based on events in Lupus and Arthritis where termination of drug development occurred) because of severe infection due to cell depletion, I suspect that people will “pull their fingers out” and take notice of the views above and below.


There will of course be deaths in people taking drug, because this happens as part of life and not all deaths are drug related. Adverse events could occur early or late  (We are aware of some rumors) this will be due to chance of when the infections strike and there will be infections associated with B cell depletion. But if you take the treatment forever the risks must accumulate due to chance


However, I have hypothesised that ocrelizumab is an induction therapy just like alemtuzumab and cladribine…..Why?

Because, in my current view (this could change) they work the same way and all deplete memory B cells

Based on the unpublished, (why was it not published…Is it ethical to put people through these trials and not properly document the data but in the public domain see the Stephen Hauser ECTRIMS talk or [Click here]), ocrelizumab phase II extension data set show activity in most people 18 months after the last dose.

Does it need a tragedy, before people think about this?
Maybe the manufacturers should plan and do a trial now…Maybe I am wrong and they can shut me up!


They can do this by showing us the data. 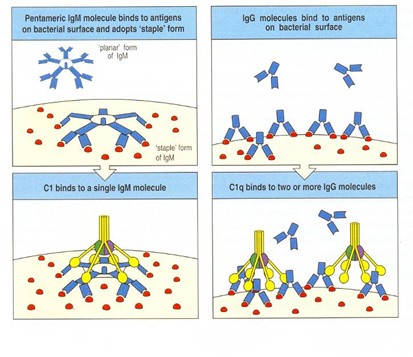 The complement system consists of a number of small proteins found in the blood, in general synthesized by the liver, and normally circulating as inactive precursors (pro-proteins). When stimulated by one of several triggers, proteases in the system cleave specific proteins to initiate and amplifying cascade of further cleavages.

The third complement component binds to the cell/pathogen surface and stimulates C5 to split in to CD5a and C5b. 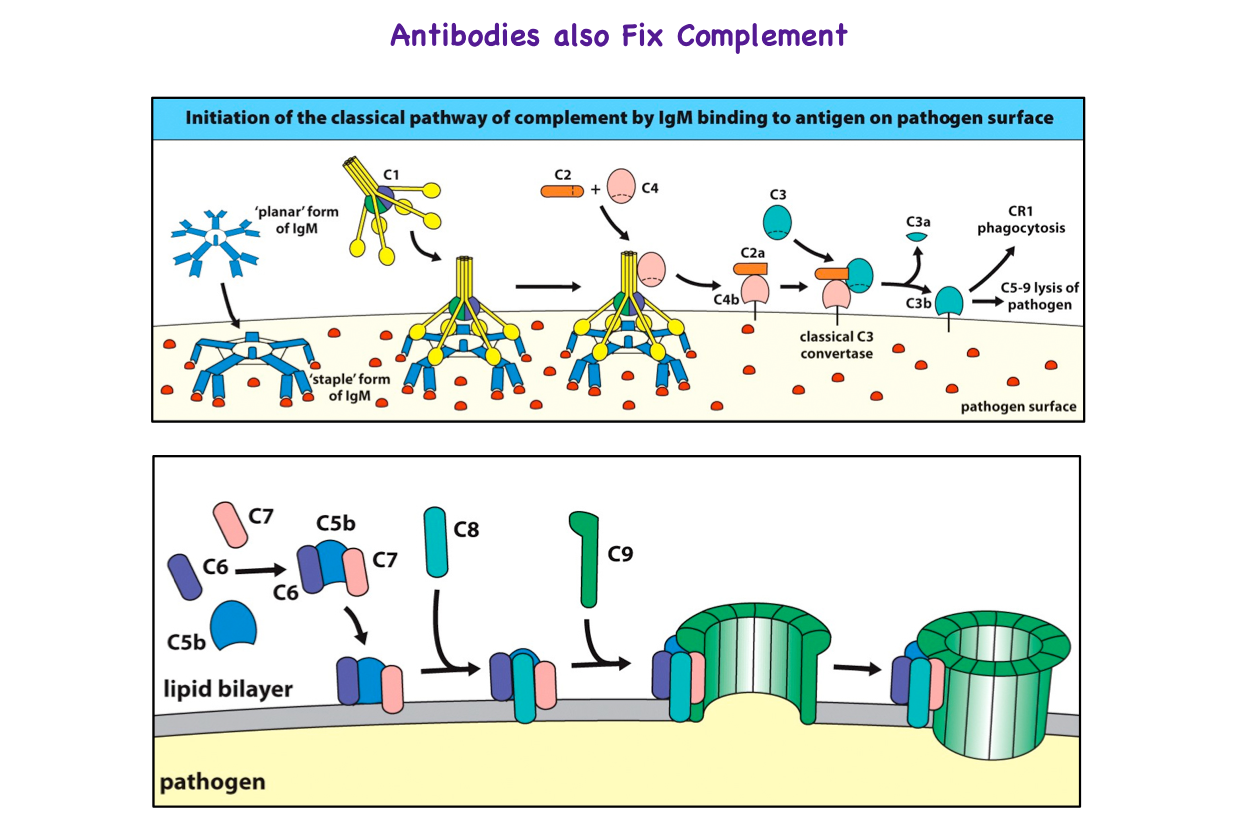 This stimulates the production of the membrane attack complex.(C5b, C6, C7, C8, C9) to form a pore in the surface of the target so that the cell contents explode from the cell.

It is just like a pin popping a balloon.

Antibody dependent cellular cytotoxicity.  Antibody binds to the target cell and then a natural killer cell binds to the tail of the antibody (Fragment crystallisable = Fc) via Fc receptors. The natural killer cells release porforins that punch holes in the targets.
We know alot about rituximab and how it depletes, Ocrelizumab is more active than rituximab at complement fixation and ADCC and so it is going to be a more effective killer.