A potential pathological mechanism for memory B cells

Bio: RAH is a Norwegian MD, currently a PhD candidate in the MS section of the Clinical Neuroscience group at Akershus University Hospital. Previous work includes examining the many effects of glatiramer acetate on the immune system. Our current work is focusing on B cells in particular, and their potential pathological collaboration with T cells in pwMS. 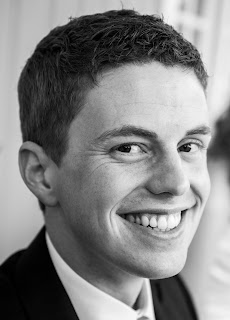 Post:
The importance of B cells for MS pathology has increasingly been stressed by several research groups after nearly a decade of successful B cell depleting trials. A lot of evidence for these cells’ involvement in regulating the disease have been presented on this blog and in formal scientific channels
(I urge you all to read the blog posts if you haven’t already!).

But what exactly are the B cells doing?

How are they generating and/or maintaining MS?

Why the memory B cells in particular?

Our group has worked on this subject for some time, but our hypothesis calls for some background info first:

B cells are part of the adaptive immune system, and have evolved numerous ways to adapt and diversify. What separates one B cell from another is their B cell receptor, the receptor they recognise antigens with. By the time immature B cells exits the bone-marrow, they express these B cell receptors, created by a near-random combination of a set of genes, and resulting in unique variable regions at the antigen binding site (the “tip”) of the receptor. In a healthy human the resulting theoretical repertoire after this process is roughly 3 x 10*11 (=300 000 000 000), preparing the different B cells to be able to bind nearly any antigen (but only one specificity each). There are also mechanisms in place to ensure these react as little as possible to our own cells etc, but discussing that is outside the scope of this text.

It doesn’t stop there! Upon activation and maturation, and on the way to becoming memory B cells or antibody secreting cells (plasma blasts/cells), B cells undergo what is known as affinity maturation. By introducing mutations into the already very variable B cell receptors, B cells are able to create variable regions in near infinite constellations. If you pick two random memory B cells from your blood, the likelihood of those two having the same B cell receptor is near zero. 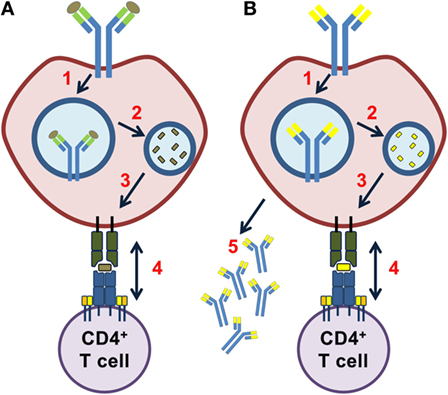 So what happens when B cells present idiotopes from their own variable regions, a potential repertoire of near infinite variations? T cells may react in unfortunate ways! Studies have shown that such idiotope specific T-B collaboration may result in autoimmune disease in mice, and our group has – in small scale studies – further demonstrated how B cells from pwMS were capable of activating T cells with their own idiotopes. This whole process is what we call “unlinked”, meaning that the while the B cell is specific for an (unknown) antigen, the T cell is specific for the idiotope, there is no common antigen to “link” them. The result may be generation of plasma blasts or plasma cells of potentially varying specificity, meaning the antibodies from these cells could bind a wide array of targets.

Our main issue with the hypothesis was the sheer magnitude of B cell receptors that potentially could carry pathological idiotopes. There’s no way of telling whether such idiotopes may vary between patients, or carry similarities. Examining them all in the lab would be an extreme undertaking without any pre-screening for candidates.

Generating a model for such pre-screening was the object of our latest article; the abstract is featured below. We postulated that three principal events would be necessary for idiotope specific T-B collaboration to occur:

1: The variable region had to be properly chopped up by enzymes within the B cells.

2: The properly chopped fragments (idiotopes) had to bind the HLA molecules of the B cell in order to be “visible” for T cells. 3: The T cells had to recognize the idiotope as “foreign”, like any antigen from bacteria/virus, meaning they should not be tolerant.

What we further did was to immunosequence the B cell repertoire of spinal fluid from pwMS, meaning we genetically “mapped” the variable regions of said B cells. This way we could infer the different variable regions present in spinal fluid B cells! These could then be run through complex bioinformatics tools in order to predict our three prerequisites (chopping, binding, recognition).

We found that nearly half (42%) of the most frequently occurring B cell variable regions in the spinal fluid of pwMS contained at least one idiotope meeting our three prerequisites using the predictive models. While this finding was not significantly different from our control group, with the set thresholds for each prerequisites, the results argue that idiotope specific T-B cell collaboration is a probable event in pwMS (and this does not exclude it from happening in other diseases).

Further validation ex vivo/in vitro is needed for this work to be confirmed. But with these tools we are now prepared to investigate this further, with increased focus and hopefully demonstrate this really occurs on a wider scale in MS patients, potentially explaining an intrinsic B cell pathology consistent with antigen presentation, inconsistent target antigen and a wide array of antibody specificities in spinal fluid of pwMS.

Abstract:
Memory B cells acting as antigen-presenting cells are believed to be important in multiple sclerosis (MS), but the antigen they present remains unknown. We hypothesized that B cells may activate CD4+ T cells in the central nervous system of MS patients by presenting idiotopes from their own immunoglobulin variable regions on human leucocyte antigen (HLA) class II molecules.
Here, we use bioinformatics prediction analysis of B cell immunoglobulin variable regions from 11 MS patients and 6 controls with other inflammatory neurological disorders (OINDs), to assess whether the prerequisites for such idiotope-driven T–B cell collaboration are present.

Our findings indicate that idiotopes from the complementarity determining region (CDR) 3 of MS patients on average have high predicted affinities for disease associated HLA-DRB1*15:01 molecules and are predicted to be endosomally processed by cathepsin S and L in positions that allows such HLA binding to occur. Additionally, complementarity determining region 3 sequences from cerebrospinal fluid (CSF) B cells from MS patients contain on average more rare T cell-exposed motifs that could potentially escape tolerance and stimulate CD4+ T cells than CSF B cells from OIND patients. Many of these features were associated with preferential use of the IGHV4 gene family by CSF B cells from MS patients.

This is the first study to combine high-throughput sequencing of patient immune repertoires with large-scale prediction analysis and provides key indicators for future in vitro and in vivo analyses.

COI: Have received speaker’s honoraria from Merck Norway and research award from Biogen Norway.
None of these are considered to affect my thoughts on this subject.
Rune A. Høglund, MD Clinical Neuroscience group, Department of Neurology, Akershus University Hospital Institute of clinical medicine, University of Oslo, Norway