We don’t understand yet why people get MS. The accepted view is that there is an interaction between risk genes and environmental factors like EBV, smoking, and vitamin D status. Epidemiological studies have helped to identify these risk factors for developing MS, but it is unclear how these factors actually contribute to disease evolution and progression. There is strong evidence that smoking increases your risk of developing MS. There is also strong evidence that in pwMS, smoking is bad for both disease activity and long-term disability progression. The effect of smoking is long-lived: it takes about 10 years after quitting for disease activity to return to the level of people who don’t smoke. As well as being harmful in terms of overall health, smoking increases your risk of Crohn’s disease and Rheumatoid Arthritis – other autoimmune diseases similar in some respects to MS.

Why smoking influences MS is unclear. One explanation is that the chemicals in cigarette smoking alter the tagging and folding of DNA in our cells, and thereby change the way that the genetic code is read out.

A brief interlude on this theme. For many years the central dogma of biology was that information flowed as a one-way street (excuse mixed metaphor) from our genetic code. Crick and Watson, the scientists credited with discovering the structure of DNA, suggested that the genetic material (DNA) tells the cell which proteins to make, but that this information does not flow the other way. Classically, DNA was thought to be used to generate messenger molecules (mRNA), which then formed the recipe for making the proteins required for cellular processes: 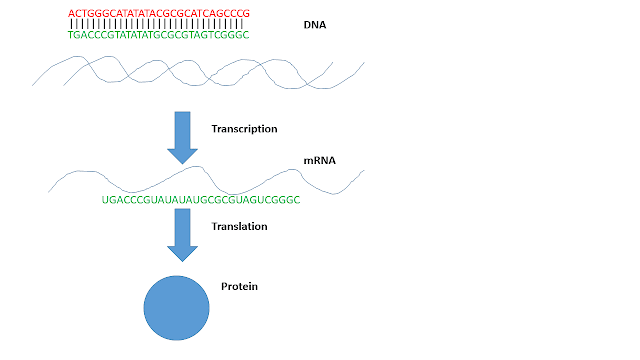 We now recognise that this is not the whole story. While the vast majority of our cells carry the same DNA, they do not all make the same proteins. In fact any one cell only reads out from a tiny fraction of its DNA at any one time. In addition, the parts of DNA that a cells reads out from changes dynamically from moment to moment.

How does this phenomenon take place? Well, although the backbone of DNA is a simple double-stranded helix, each molecule of DNA is folded into a complicated 3D structure in the cell. To read out from a particular portion of DNA, that portion needs to be accessible to the reading machinery. We now understand that cells have various ways of ‘tagging’ parts of the DNA molecule which can effectively turn genes on and off. These modifications essentially change the way the genetic code is read out without changing the DNA itself: they are therefore dubbed ‘epigenetic’ rather than genetic.
One of the best-understood epigenetic modifications is called methylation. A methyl group is a carbon with 3 hydrogen atoms attached. Addition of a methyl group to a part of DNA normally has the effect of switching off nearby genes. Studying DNA methylation is very interesting because it tells us how genes may be switched on and off in both health and disease.

Against this backdrop, a new Swedish study asked whether DNA methylation might be the link between smoking and MS. They looked at 2 cohorts from a huge case-control study of MS. First, they picked people who had a particular genetic signature known to interact with smoking: they were positive for HLA-DRB1*15:01 – the main risk gene – and negative for HLA-A*02 – the main protective gene. The second group were people with MS without any genetic criteria.

For each participant, they analysed the entire epigenome: the map of all methylated sites in the DNA. They then categorised people into three groups according to when they last smoked:
–          Within 5 years
–          Beyond 5 years
–          Never-smokers
… and compared the epigenomes between these groups.

Interestingly, they found several positions in the genome at which the methylation status differed between never-smokers and recent smokers. There was no difference between never-smokers and ex-smokers who quite >5 years previously. Surprisingly, the effect of smoking on DNA methylation is greater in those with MS than those without. Whether this is due to synergistic effects of disease-modifying therapy or related to the underlying disease is not clear.

This study identifies a possible mechanistic link between smoking and the risk of developing MS. The authors prove that smoking leads to epigenetic changes in pwMS. It is therefore plausible that smoking has widespread effects on the expression of various genes which may facilitate the development of MS. The fact that these effects were only seen in the recent smokers supports the idea that smoking might promote MS through changes in gene expression, as this fits with the epidemiological data: the harms of smoking for MS dissipate 5 – 10 years after quitting. So, the timescale of the epigenetic modifications reported here is consistent with a causal link between smoking and MS.

While these data are very interesting, they do not really show how smoking exacerbates MS. Smoking influenced the methylation status of several genes, but only one of these was shown to be expressed differently as a downstream consequence. This gene was not obviously involved in the development of MS. It seems likely to me that smoking influences the expression of lots of genes; it also promotes lung inflammation, can introduce mutations into the underlying DNA, and promotes cardiovascular disease. The mechanism by which smoking influences MS is likely very complicated and is unlikely to be just due to a direct effect on gene expression. There are also important confounders like activity level, socio-economic status, and overall health which may influence smoking status and epigenetic modifications.

The bottom line is that this study shows one possible mechanism – epigenetic modification – through which smoking might influence the risk of MS.
***
Abstract
Cigarette smoking is an established environmental risk factor for Multiple Sclerosis (MS), a chronic inflammatory and neurodegenerative disease, although a mechanistic basis remains largely unknown. We aimed at investigating how smoking affects blood DNA methylation in MS patients, by assaying genome-wide DNA methylation and comparing smokers, former smokers and never smokers in two Swedish cohorts, differing for known MS risk factors. Smoking affects DNA methylation genome-wide significantly, an exposure-response relationship exists and the time since smoking cessation affects methylation levels. The results also show that the changes were larger in the cohort bearing the major genetic risk factors for MS (female sex and HLA risk haplotypes). Furthermore, CpG sites mapping to genes with known genetic or functional role in the disease are differentially methylated by smoking. Modeling of the methylation levels for a CpG site in the AHRR gene indicates that MS modifies the effect of smoking on methylation changes, by significantly interacting with the effect of smoking load. Alongside, we report that the gene expression of AHRR increased in MS patients after smoking. Our results suggest that epigenetic modifications may reveal the link between a modifiable risk factor and the pathogenetic mechanisms.