They can see the value of hitting the B cell and secretly they have been planning on targeting the B cell with some small molecule inhibitors. Want to know more?


The hot target of the year is

Bruton’s tyrosine kinase (abbreviated Btk or BTK). This  is an enzyme that plays a crucial role in B-cell development.

Btk contains a PH domain that binds phosphatidylinositol (3,4,5)-trisphosphate (PIP3). PIP3 binding induces Btk to phosphorylate phospholipase C, which in turn hydrolyzes PIP2, a phosphatidylinositol, into two second messengers, inositol triphosphate (IP3) and diacylglycerol (DAG), which then go on to modulate the activity of downstream proteins during B-cell signalling

Mutations in the BTK gene are implicated in the primary immunodeficiency disease X-linked agammaglobulinemia (Bruton’s agammaglobulinemia); People with XLA have normal pre-B cell populations in their bone marrow but these cells fail to mature and enter the circulation. Bruton’s tyrosine kinase was discovered in 1993 and is named for Ogden Bruton, who first described XLA in 1952

Simply put, they are B cell selective agents that target immature B cells in the bone marrow, but also memory B cells and importantly can hit plasma cells too. It is also on moncytes and macrophages, but T cells have low levels. 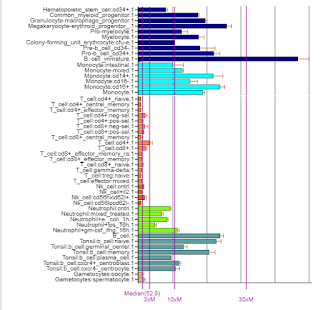 Hopefully they have done a bit more homework after the mess made with Acaticept which made MS worse. This was made on the assumption that they were blocking B cells and as B cell activating factor makes B cells why not block it and B cells go away.


However, as we suggested blocking BAFF will get rid of plasma cells and mature B cells but is does not get rid of memory B cells and appears to makes more of them. If they had thought that memory B cells were a problem them maybe the trials would not have been done as the memory B cell resistance was known.

However it does tell us that the mature B cells are not the problem and may likewise suggest that the plasma cells in the periphery (those in the brain may be a different story)  may not be the problem.


Merck have Evobrutinib in trial and have enrolled 250 pwMS across 55 sites and are fully-recruited. PwMS have been placed into three doses of drug, placebo or dimethyl fumarate for 24 weeks.

Sanofi have entered the fray as they have just bought PRM226 a BTK inhibitor that is designed to enter the brain and the spinal cord. If this can get rid of oligoclonal bands, will the progressive MS be dealt with?

There are many more companies with BTK inhibitors, which they are developing for B cell cancers.


How convinced are you about B cells?