Alemtuzumab can stop working. Is it because CD4 T cells are no longer depleted or is it because they have neutralizing antibodies?


In some people this occurs, and could be more of a problem after the the second infusion cycle.


Whats more, some people do not deplete in the first place.


What information do we need to know from the manufacturer?

Alemtuzumab, a highly effective treatment for relapsing remitting multiple sclerosis (RRMS), induces lymphopenia especially of CD4+ T cells. Here, we report the atypical CD4+ T population behaviour of two patients with persistent disease activity despite repeated alemtuzumab treatments. Whereas lymphocytes count decreased and fluctuated accordingly to alemtuzumab administration, their CD4+ cell percentage was not or just mildly affected and was slightly below the lowest normal limit already before alemtuzumab. These cases anticipate further studies aimed to investigate whether the evaluation of the CD4+ cell percentage could represent a helpful tool to address the individual clinical response to alemtuzumab. 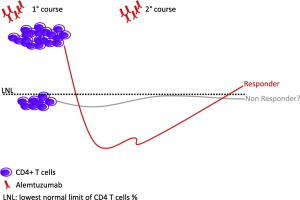 This is an interesting one because it has been shown that neither T cells numbers, nor CD19+ B cell numbers for that matter, correlate with disease activity.


In this report they show that on first dose, there is marked lymphocyte depletion that is present 6 months after the first infusion. However there is no obvious depletion 6 months after the second or subsequent infusions and when disease activity re-appears. The percentage CD4 positive value does not change in two non-responders.

Now the next problem. Immature/Mature B cells are good space fillers and means the B cell compartment is back to normal by 3 to 6 months and this complicates understanding about what’s going on when you use percentages compared to absolute numbers.

So the authors were a bit stumped on how to explain this effect.

There was an apparent lack of depletion after second or more courses. Perhaps this is the first report of people developing neutralizing antibodies to block function as a consequence of the first infusion.

This may be consistent with the lack of effect.

The idea was not even mentioned and perhaps this is because they were not mentioned in the pivotal trials, so nobody knows about them, unless they have read our paper


or the fine print in the FDA reports.

If only they had been measured, we could have an idea if this was the case.

Indeed, we have found this when we interrogated the MS CARE 1 trial. 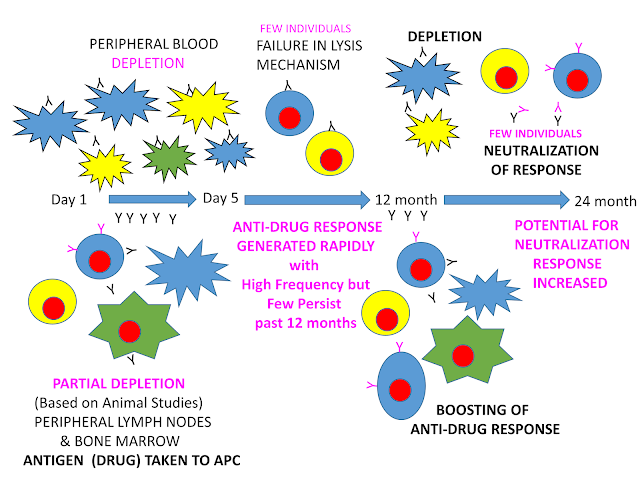 
SUMMARY
Alemtuzumab is a lymphocyte-depleting antibody and one of the most effective treatments for relapsing multiple sclerosis. However, it also causes loss of immune-tolerance leading to secondary autoimmunity and marked anti-drug antibody responses. Whilst these anti-drug responses have been reported to be of no significance, we hypothesised that they will affect the depleting-capacity and treatment-response in some individuals. This was found following analysis of the regulatory submission of the pivotal phase III trials, which was obtained from the European Medicines Agency. At the population-level there was lack of influence of “ever-positive” alemtuzumab-specific antibody responses on lymphocyte depletion, clinical efficacy and side-effects during the two year trial. This was not surprising as no one prior to first-infusion, and only 0.6% of people prior to the second-infusion had pre-infusion, neutralizing antibodies (Nabs). However, at the individual-level, NAbs led to poor lymphocyte depletion. Importantly, it was evident that 31% of people had NAbs and 75% had binding antibodies at the end of treatment-cycle 2, suggests that problems may occur in people requiring addition alemtuzumab-cycles. In addition, we also identified individuals, following ‘post-marketing’ alemtuzumab use, whose lymphocyte level was never effectively depleted after the first infusion cycle. Thus, although alemtuzumab depletes lymphocytes in most individuals, some people fail to deplete/deplete-poorly, probably due to biological-response variation and NAbs and this may lead to treatment failure. Monitoring depletion following infusion and assessment of neutralizing response prior to re-infusion may help inform the decision to retreat or switch therapy to limit treatment failure.

In the MS-CARE trials, it was evident that neutralizing antibodies generate quickly. They were there within one month of first infusion, but they may not have caused too much of a problem because they disappear within 12 months.  But by 24 months over 30% of people have an existing neutralizing antibody response. Meaning that one will have more concern for the antibody not depleting as well on third cycle.

Binding antibodies have been reported, although they are reported to be of minimal importance.


Neutralizing antibodies have not been mentioned in the pivotal phase II and phase III trials and were even called inhibitory antibodies in the (European Medicines Agency) report.

If antibodies were not a potential problem then the Cambridge group would not have done a trial to get rid of these antibodies (click).

Alemtuzumab was the first humanised antibody which was designed to get rid of  neutralizing antibodies, but in reality it is not that great at stopping these and about 80% of PwMS taking alemtuzumab get anti-alemtuzumab antibodies.

Actually one wonders, if this dictated the dosing schedule of alemtuzumab, of two cycles and only dosing the additional cycles at the year end rather than after disease reactivation, to allow antibodies to disappear before the next dose. After two treatment cycles there is a greater chance of the drug not working


Has this issue been hidden all along?
(One for the conspiracy theorists)


Is this important. Based on the trial data only 5 people had pre-existing neutralising antibodies before the second cycle.


We could work out the MS-CARE 1 response because the EMA had provided data of the maximum and minimum and the medium response and there were only three people affected. There were also categoriesed in relation to the amount of antibody produced. One person had a higher level of neutralizing antibodies and 1 out of 3 people clearly did not deplete well or did not deplete at all. We could not say what they were before. We did ask but we were not given the raw data.
However this raises some important questions:

How many people receiving third or more courses of antibody deplete well and how many deplete poorly?

What is the level of pre-existing neutralizing antibodies (titre) that stops alemtuzuamb from depleting?
The manufacturers of the drug must know these answers, as the phase III extension data has a number of people receiving three or more courses and about 30% would have pre-existing neutralizing antibodies before treatment cycle 3. (Read the paper above).

The manufacturers had made a poster of people switching from alemtuzumab to fingolimod to say it was OK (Click here).


The poster shows the lymphocyte levels in 13 people of which 6 had three or more infusion cycles. Of these 6 people there were two people (a third) who stopped depleting on cycle 3. Was this due to neutralising antibodies? One can only guess.


I should say you would expect that any protein treatment will cause neutralizing antibodies and for most people I am sure treatment will work. However, it would be valuable to know just how likely it is for you to be the person, where it will stop working.


What is the cause?


We have not found people who do not express CD52 (the target for alemtuzumab) having looked in a data base of 60,000 people. There were also no loss of function variants.


However, there are genetic variations that block IgG1 antibodies from depleting properly. If this is the problem what would the effect on ocrelizumab be, maybe the same.


If you are one of those unlucky people who don’t deplete on first infusion and are willing to help us try find a  reason, get your neurologist to contact us.


Why bring this up?
Because it is about your safety or the safety of your pwMS.