At a meeting (At the Limits) recently a pair of prominent immunologists took exception, when I hinted that Blockade of Interleukin 17 has been perceived to have failed in MS, because of modest efficacy.
I was challenged on this. I replied I did not say it did not work, but countered that it was not much better than beta interferon. They said that it was not that it did not work, but that it was dropped for operational reasons.

Did they simply really mean, it wasn’t good enough?

Does any one in the know, reading the blog, care to comment?

At the time the trial with secrukinumab (Cosentyx), was stopped early because it was said that proof-of-concept was proved and there was activity (although the primary endpoint was not met) meaning the trial FAILED up to that point. It was suggested that Novartis had another anti-IL17 (CJM112) that was better. Yet secrukinumab was good enough to be used in psoriasis (Skin autoimmune disease).

However, there were other endpoints that indicated that interleukin 17 was having an effect and the main endpoint (cumulative unique active lesion) almost showed a difference with a 49% change P=0.087 (Almost significant but Not!) and the number of cumulative new gadolinium lesions were reduced by 67% (31-84% P=0.003). The annualised relapse rate was dropped from 0.7 to 0.4 (~43% drop) to week 24.

The immunologists said there were some people that did amazing well….yes, but you have people who do well even when they get nothing.,

You simply can’t cherry pick like that…it’s not an EAE experiment:-)

So amazing…I hear the immunologists say…but if we put it in the context of  beta interferon over 24 weeks.


Contrast this to ocrelizumab with a 90-95% reduction of MRI lesion in the phase II.


Should we get more excited about a 67% reduction?


An annualised relapse rate of 0.4 verses 0.15 seen with alemtuzumab, cladribine and ocrelizumab to name three active agents. Yes I know they are different trial conditions and duration.


Meanwhile it seems that plans have been quietly shelved to do the next MS study, with the more effective anti-IL17. We are years down the line and nothing.


But what happened in animals, where the TH17 dogma was generated?


What happens when you block IL-17 in EAE?


IL-17 Knockout (100% get EAE and the severity is dropped severity a bit……..Hardly impressive.

Don’t believe it? Try another study 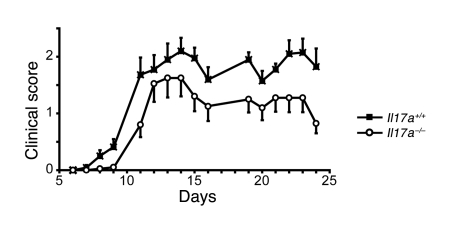 I could go on and on


Simple answer is, it isn’t very impressive in acute EAE

However, remember anti-IL-17 is not inert and it acts of B cells:-).
Th17 may create B cell aggregates in EAE

However, it is important to look at the data and not the rhetoric🙂