The mechanisms which drive inflammation and neuron death in MS are very complicated. These processes involve interactions between multiple cell types in and outside the brain. The crosstalk between nerve cells (neurons), immune cells from the blood, and brain-resident supporting cells (glia) is important to study because it could open up new avenues for disease-modifying therapy.


Glial cells express a wide range of receptors, allowing them to respond to a wide range of signals. Previously thought to be playing second fiddle to neurons, people now recognise that glial cells are dynamic sensors and regulators of the brain environment. Glial dysfunction is seen in almost all neurodegenerative and neuroinflammatory disorders.

One of the most intriguing receptors expressed by glial cells is the P2X7 receptor. This detects extracellular ATP – the major energy source for the cell – and in the presence of ATP, it causes positively charged ions to flow into the cell and trigger inflammation, cell death, and other activity. There should not be much ATP outside of cells, and so its presence outside of cells signals that some kind of cell damage has occurred. Thus, it makes sense that P2X7 might be one way in which glial cells sense and respond to damage. This response, which may be helpful in the healthy brain, may contribute to inflammation and further cell death in MS. P2X7 has attracted interest in the MS world because it is expressed at high levels in lesions and blocking it prevents lesion formation.

A new study looked in a bit more detail to see whether P2X7 levels are raised in MS. P2X7 was downregulated in peripheral immune cells from pwMS compared to healthy controls, and the proportion of blood monocytes – a type of innate immune cell – expressing P2X7 was lower in people with active disease vs people with stable disease and controls. P2X7 was also downregulated in these cells when inflammation was simulated a dish.

The authors then looked at post-mortem brain tissue. P2X7 was detected in several glial subtypes in post-mortem samples from pwMS. It was also highly expressed in both chronic ‘active’ and chronic ‘inactive’ lesions. Interestingly, P2X7 expression was increased in the cortex of pwMS vs healthy controls.

So in short, in pwMS:
– P2X7 was decreased on peripheral blood immune cells
– P2X7 was increased in the brain

This is a nice idea but it’s not what these data show. This shows nicely that P2X7 is highly expressed in the brains of pwMS but expressed at a lower level in the peripheral blood. I think it’s very clear from these data that P2X7 will play multiple roles in regulating CNS inflammation depending on which cells express it, where, and in the context of which extracellular signals. We don’t fully understand which signals promote lesion healing and which promote permanent nerve cell loss. Glia are hugely important in determining the fate of nerve cells in both lesions and non-lesional brain – understanding how receptors like P2X7 regulate their behaviour is an exciting and interesting avenue for future work. 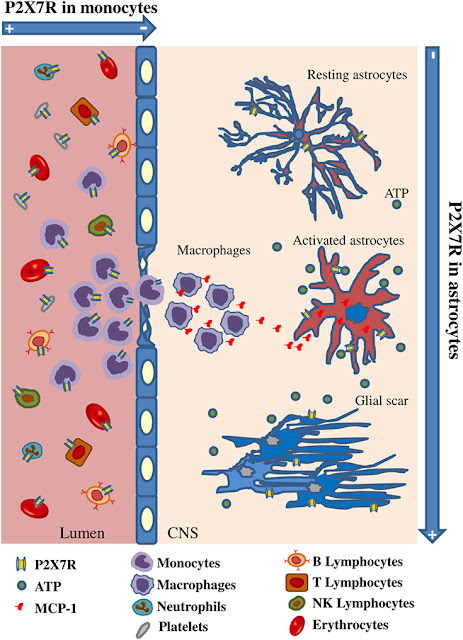 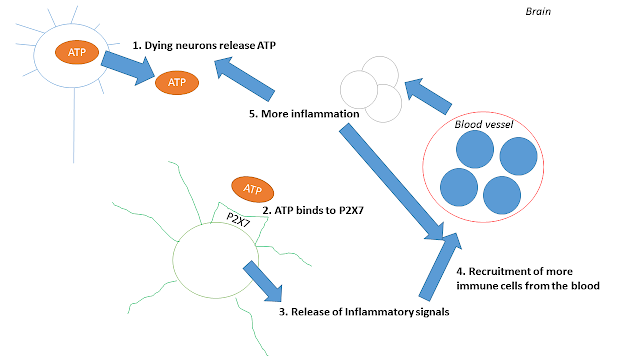 ***
Abstract
Multiple sclerosis (MS) is characterized by macrophage accumulation and inflammatory infiltrates into the CNS contributing to demyelination. Because purinergic P2X7 receptor (P2X7R) is known to be abundantly expressed on cells of the hematopoietic lineage and of the nervous system, we further investigated its phenotypic expression in MS and experimental autoimmune encephalomyelitis conditions. By quantitative reverse transcription polymerase chain reaction and flow cytometry, we analyzed the P2X7R expression in human mononuclear cells of peripheral blood from stable and acute relapsing-remitting MS phases. Human monocytes were also challenged in vitro with pro-inflammatory stimuli such as the lipopolysaccharide, or the P2X7R preferential agonist 2′(3′)-O-(4 Benzoylbenzoyl)adenosine 5′-triphosphate, before evaluating P2X7R protein expression. Finally, by immunohistochemistry and immunofluorescence confocal analysis, we investigated the P2X7R expression in frontal cortex from secondary progressive MS cases. We demonstrated that P2X7R is present and inhibited on peripheral monocytes isolated from MS donors during the acute phase of the disease, moreover it is down-regulated in human monocytes after pro-inflammatory stimulation in vitro. P2X7R is instead up-regulated on astrocytes in the parenchyma of frontal cortex from secondary progressive MS patients, concomitantly with monocyte chemoattractant protein-1 chemokine, while totally absent from microglia/macrophages or oligodendrocytes, despite the occurrence of inflammatory conditions. Our results suggest that inhibition of P2X7R on monocytes and up-regulation in astrocytes might contribute to sustain inflammatory mechanisms in MS. By acquiring further knowledge about P2X7R dynamics and identifying P2X7R as a potential marker for the disease, we expect to gain insights into the molecular pathways of MS.