The lymphatic system is part of the circulatory system and a very important part of the immune system, comprising a network of lymphatic vessels that carry a clear fluid called lymph (from Latin (lympha meaning “water”)

Want to learn more?
The human circulatory system processes an average of 20 litres of blood per day through capillary filtration, which removes plasma while leaving the blood cells in the blood.
Roughly 17 litres of the filtered plasma are reabsorbed directly into the blood vessels, while the remaining three litres remain in the interstitial fluid. One of the main functions of the lymph system is to provide a return route to the blood for the surplus three litres.
The lymph in the tissues is moved along the lymphatic vessel network by either intrinsic contractions of the lymphatic passages or by extrinsic compression of the lymphatic vessels via external tissue forces (e.g. the contractions of skeletal muscles).

The other main function is that of defence in the immune system. Lymph is very similar to blood plasma: and also contains waste products and cellular debris together with bacteria and proteins from the tissues in the body. The lymph passes through lymph glands on its way back to the blood:

Lymph glands are where lymphocyte-mediated immune reactions are started


Cells laden with antigens (Something recognized by the immune system) that pickup from their surroundings, or perhaps free-floating antigen flows down the lymphatics into the lymph glands. In the skin these cells are called Langerhans cells (named after a German Scientist Paul Langerhans in 1868) and there are 700 cells for every square mm of skin. These present the antigens to T cells but by the time they arrive in the lymph node they have a new name called interdigitating cells as they have long processes that can inter weave with T cells. They are also known as dendritic cells. When a T cell is activated for the first time they proliferate.

These areas are organised to activate T and B cells. As mentioned they are structured to aid function.

How do T cells help B cells as they relate to the lymphatic system?
Follicular B helper T cells (also known as just follicular helper T cells or TFH), are antigen-experienced CD4+ T cells found in the periphery within B cell follicles of secondary lymphoid organs and are identified by their constitutive expression of the B cell follicle homing receptor CXCR5.


Upon cellular interaction and cross-signaling with their cognate follicular (Fo B) B cells, TFH cells trigger the formation and maintenance of germinal centres through the expression of CD40 ligand (CD40L) and the secretion of IL-21 and IL-4. TFH cells also migrate into these seeded germinal centres, predominantly composed of rapidly dividing and mutating B cells.


Within germinal centres, TFH cells play a critical role in mediating the selection and survival of B cells that go on to differentiate either into special plasma cells capable of producing high affinity antibodies against foreign antigen, or memory B cells capable of quick immune re-activation in the future if ever the same antigen is re-encountered.

This can be see in histology. CD20 binds B cells but not plasma cells so you can see most of the cells in the germinal centre have CD20 so they are not plasma cells. CD27 is on the memory B cells but can be found on activated T cells. CD1c  is a molecule associated with a form of antigen presentation.IgD is immunoglobulin D which is on B cells and is lost once memory cells class switch to produce IgA, IgG and IgE. So you can see the memory B cells are largely outside the follicle.

Where are the plasma cells?
Based on the fancy diagrams and all the hoo hah about ectopic follicles in the brain of MS, I was also under the assumption that the plasma cells would be located inside the follicle.


These cells stain with CD138.


When I had a look at the distribution of CD138 in lymphoid tissue I got a shock. The plasma cells are a few cells scattered outside the follicles and B cell areas.

Here they are in the spleen, so you can see they are not really in the follicles. This is a revelation to me, because we are probably wasting our time looking for follicles, the plasma cells may be the odd cell next to a macrophage/microglia pumping out antibodies. 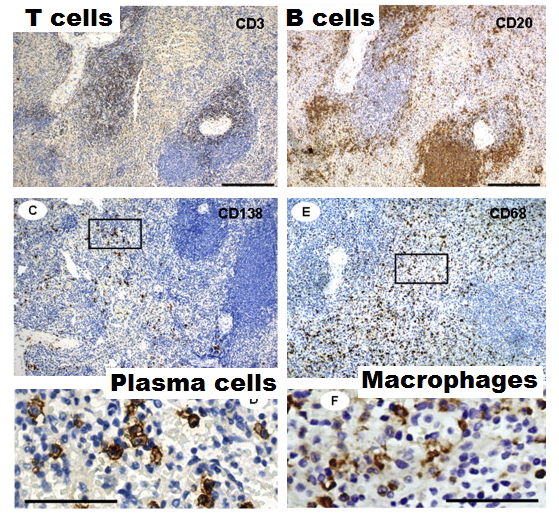 So maybe those pesky pathologists have done it again:-)….We are looking for the wrong thing.


I’ll have to do some more reading. It’s good that we learn together.
Some of you can hopefully spot my mistakes and misunderstandings.