As you may be aware I have been banging on about the importance of B memory cells for most of the year, but it has been an uphill struggle to get this view accepted.

However, response to therapy creates a powerful piece of insight that frankly can’t be ignored. But I meet Ostriches ever day.

Ocrelizumab and rituximab have created a potential problem for the understanding of MS and other autoimmune diseases.

Here you have a therapeutic antibody that depletes B cells, yet is very good at blocking relapsing MS.

Now you could take the view that B cells make toxic molecules and can do the damage, without having to evoke any T cell involvement.

Alternatively, you can take the view that it is the CD20 positive T cell population that does the trick. You put faith in this (flimsy) argument and accept that depletion of a few T cells is all important, whilst rejecting the fact that massive depletion,  with CD4 monoclonal antibody, of T cells has had only marginal effect

However, you can have the “love-in” view and say that you are blocking antigen-presenting cell function of B cells to T cells.

This is the easy-option view that it is both cells and of course B cells probably wont exisit without some T cell involvement. However this is not the point. Many people are not ready to accept a different world-view. and this the stock answer when you ask “How does ocrelizumab work”

This is because people have spent their careers banging-on about T cells and why would they want to contemplate that “their life’s work may not be that important”.

For this reason, we have had immense difficulty publishing any alternative hypothesis.


However does the antigen presenting function really hold? We know B cells can present antigen, a Wellington Boot can present antigen if it expresses MHC….only joking but this feature was shown in the 1980s and people wasted years on it. 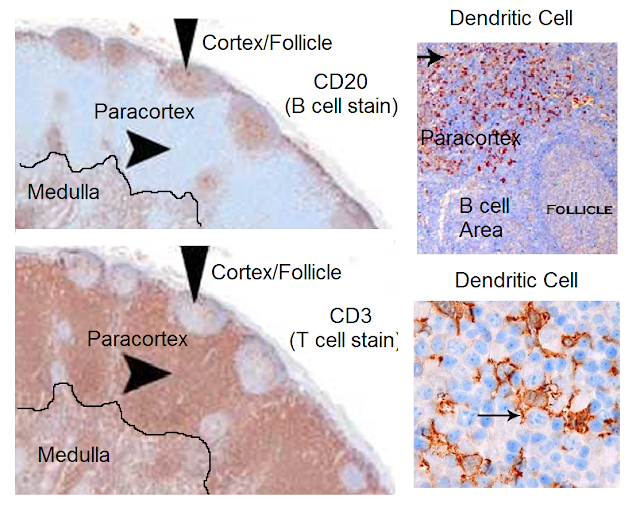 Antigen presentation, typically occurs in lymph nodes. In tissues it will be via macrophages. In the figure above you can see that B cells line the outside of the lymph node.  This is called the cortex and they form follicles, which is where memory B cells are generated. There are a few T cells in the follicles to help them do this.

But most T cells are found in the paracortex. You can see them in the bottom left in the figure above (stained brown).  So when we look at where the B cells are (top left above), they aren’t in the same areas as T cells (The blue is the nuclei of cells). So are memory B cells really important as antigen presenting cells?

The medulla is where the cells exit the lymph glands.

The important cells that present antigen to T cells are called dendritic cells which can be seen in the right on the figure above. They are common in the paracortex and have evolved to present antigen to T cells.  So why evolve B cells to do that part?
One referee said that we do “not prove our mechanism that memory B cells are important for disease activity in MS“…meaning reject the paper and the idea .

My response to the Editor (that fell on deaf ears) is that the mechanism of virtually every human treatment is unproven. We are treating people…not mice and so it is not possible to prove that drug X works in any particular way.

The best case example could be natalizumab.

We believe it works because it blocks CD49d on T cells from binding to VCAM-1 (CD105) on the blood vessel. It has a clear working mechanism, but does it work via the T cells, the B cell or something else?

Yes the latter can be the case, because when the action of natalizumab was first mentioned by Ted Yednock and Colleagues in Nature many years ago they showed that natalizumab blocked the binding of U937 cells to inflamed blood vessels.

These cells are most like a monocyte (macrophage), so they showed an activity on the macrophage, not the T cell.

So back to the referee and they said that we “didn’t show that memory B cell correlate with disease activity” so we haven’t proven our mechanism. Yes this is true we had not shown this (yet), but was it going to happen?

It had been shown with both cladribine and alemtuzumab that disease activity does not correlate with T cell levels, so if MS was T cell mediated, this approach does not work. if this has to happpen to show which cells are important, then you conclude that MS is not a T cell problem

So should we say it can’t be T cells.

The Editor was not bothered by this protestation and upheld the rejection. However, this case report (below) explains that problem.


BACKGROUND: Delayed-release dimethyl fumarate (DMF) treatment can be associated with reduced lymphocyte and leucocyte counts, which might persist after DMF discontinuation.

CASE PRESENTATION: We report the case of a patient with severe disease reactivation despite prolonged lymphopenia after DMF discontinuation. We describe the frequency and impact of prolonged lymphopenia after DMF discontinuation at two tertiary MS centres. A 36-year-old female patient with multiple sclerosis was switched to DMF after 14 years of treatment with interferon beta-1a. DMF was suspended after 4 months because of persistent lymphopenia for 3 months. Six months later, the patient had a severe relapse with multiple enhancing brain lesions at MRI although lymphopenia was still persistent. Haematological assessment excluded other causes of lymphopenia, which was evaluated as a probable iatrogenic complication of DMF. The patient was treated with i.v. methylprednisolone 1 gr daily for 3 days with clinical recovery.

CONCLUSIONS: Prolonged lymphopenia after DMT discontinuation does not protect against disease reactivation. Starting a new immune therapy should be balanced against the option of a “wait and see.” A different immunotherapeutic strategy such as an anti-B therapeutic approach could be considered.


In this person, there are low levels of lymphocytes due to the influence of dimethyl fumarate, yet they had a relapse.

So there are people developing MS attacks, whilst their blood is relatively empty of white blood cells.

Now, it is probable that it is a just small population of cells that are causing the problems. However, the source of the problematic cells is unlikely to be from within the blood.

There is only about 1-2% of the lymphocytes within the blood at any one time and the problem cells are likely to come from either primary (bone marrow) or secondary (lymphoid tissues) tissues or from within the CNS itself. So there is will be individuals that have few cells in the blood but can develop relapse. We have seen this with people developing arthritis relapse when there are few CD19+ B cells in the blood. However, there are other people with arthritis where B cell numbers in the blood act as a biomarker for disease activity.

Can this happen in MS?

If there is biomarker activity as occurs in a number of other conditions this will be great, if not we have to home-in further to identify the disease-causing cells.

On a practical point, it questions about waiting too long for cell numbers to return before switching to an alternative treatment after DMF, as there are a number of people who do not repopulate well after DMF. Maybe ProfG or DrK will tell you what we do.