I can hear you saying, “Oh no not another B-cell paper!”. However, this is where the action is. It is the B-cell and not the T-cell. Do you agree or disagree? Have your say.

A role of B cells in multiple sclerosis (MS) is well established, but there is limited understanding of their involvement during active disease. Here, we examined cerebrospinal fluid (CSF) and peripheral blood (PB) B cells in treatment-naive patients with MS or high-risk clinically isolated syndrome. Using flow cytometry, we found increased CSF lymphocytes with a disproportionate increase of B cells compared with T cells in patients with gadolinium-enhancing (Gd+) lesions on brain MRI. Ig gene heavy chain variable region (Ig-VH) repertoire sequencing of CSF and PB B cells revealed clonal relationships between intrathecal and peripheral B cell populations, which could be consistent with migration of B cells to and activation in the CNS in active MS. In addition, we found evidence for bystander immigration of B cells from the periphery, which could be supported by a CXCL13 gradient between CSF and blood. Understanding what triggers B cells to migrate and home to the CNS may ultimately aid in the rational selection of therapeutic strategies to limit progression in MS.

In active disease there are more B cells accumulating in the CNS….but what are they? 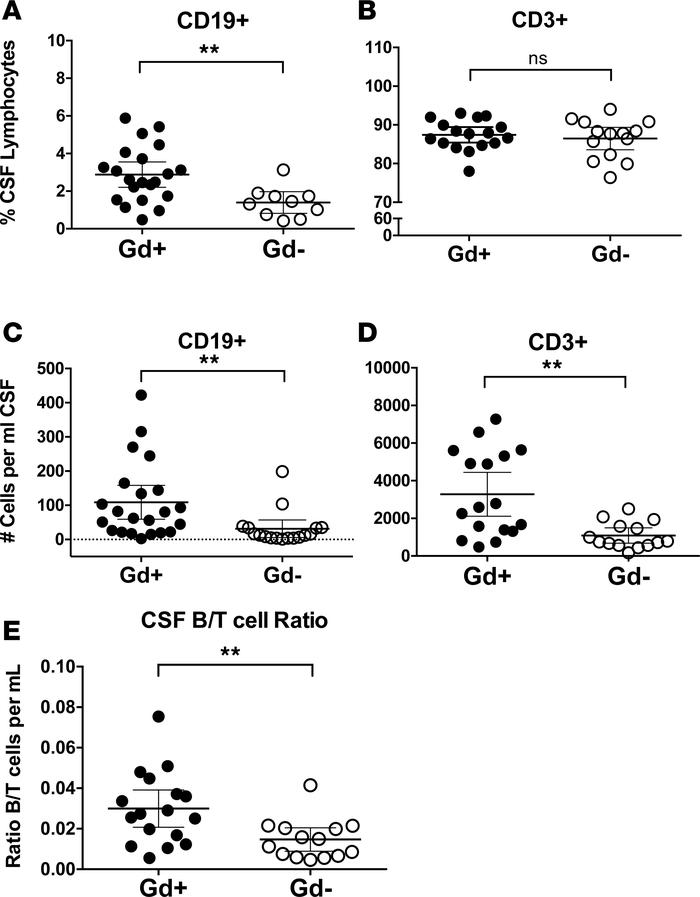 Yes you guessed it they are B memory Cells. 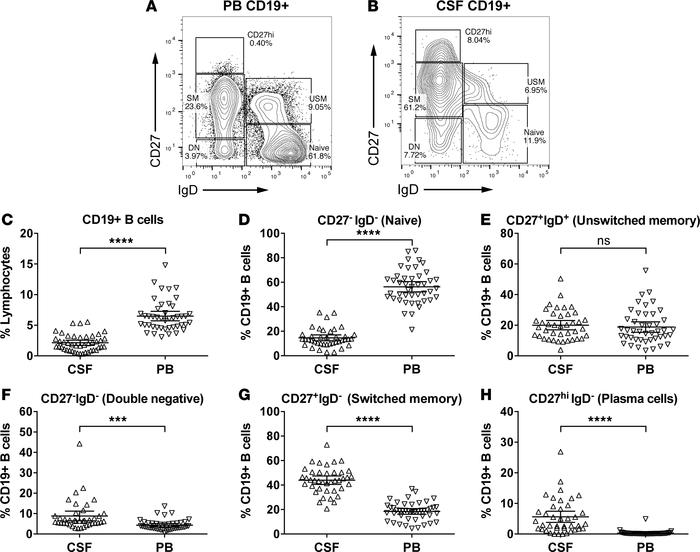 The population is the Class Switched memory B cell, There were also more plasma cells (did these come from memory cell population).

The finding that increased CSF B cells were linked to the presence of Gadolinium (Gd) lesions on brain MRI suggested their association with disease activity in MS and raised the question whether there are clonal relationships between CSF B cell subsets and their PB counterparts.

Interestingly, they found evidence peripherally antigen-stimulated B cells may have migrated to the CSF compartment where they became activated to further mature into antibody-secreting CD27 high B cells.

They found clonally related CD27hi PCs (plasmablasts/plasma cells) in blood and CSF that were also related to Ig class-switched-memory B cells in the same compartments.

Given that CD27hi PCs are likely restricted to their compartment (as evidenced by their low CXCR5 expression), and the persistence of memory B cells in MS CSF and CNS in general, parallel maturation of preexisting class switched memory B cells on both sides of the blood-brain barrier may have occurred following a peripheral immune activating event.

The presence of clonal relationships between memory B cells and plasma cells in the CSF and CSF Ig-VH clusters containing related IgM-VH and IgG-VH also support local B cell activation and subsequent maturation and class-switch recombination.

They did find naive CSF B cells with clonally related counterparts in the periphery, naive B cells do not seem to become stimulated intrathecally to mature to memory B cells.

So its B memory Cells 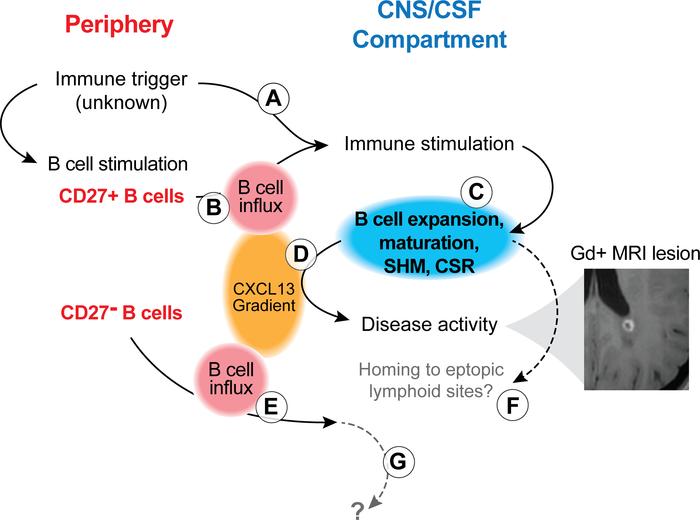 Peripheral immune activation can lead to intrathecal immune stimulation, either via antigen nonspecific (; e.g., via cytokines during an infectious disease) or antigen-specific (; via preformed CD27+IgD– SM) mechanisms. This immune activation involves B and T cells, as supported by our flow cytometry findings and those of others () (Figures 1–3), and leads to B cell activation, modification of the B cell receptor (somatic hypermutation [SHM]; Ig-class switch recombination [CSR]) and B cell maturation (). B cell influx and intrathecal B cell expansion are supported by Ig-RepSeq (Figures 5 and 6). These immune mechanisms support MS disease activity (evidenced by Gd+ MRI lesions; example from patient 57514) and lead to increased production of CXCL13 (), which, in turn, also attracts CD27– B cells to the CNS/CSF compartment (). These CD27– B cells may not have been involved in the initial peripheral immune triggering event; rather, their migration to the CNS could be a nonspecific event. Activated CD27+ B cells, once in the CNS, may further mature to antibody-secreting plasmablasts/plasma cells and may home to ectopic lymphoid sites (). We found no evidence for CD27– IgD+ B cells maturing to antigen-specific CD27+ B cell subset; the fate of naive B cells in CSF remains unknown (). It is important to note that several steps described in this model remain hypothetical and subject of future research.