Whilst hunting through some papers MD2 came across the following paper. I don’t remember seeing it and don’t remember posting on it, so a year late, I thought I would give it an airing especially since the senior author recently passed away.

However we are looking for Jigsaw pieces to help understand progressive MS and this, which looks at astrocyte activity, may be one of them

Astrocytes are probably the most overlooked glial cell in MS
They are important and support many functions:

Neuroinflammation and ischeamia induced two different types of reactive astrocytes, termed “A1” and “A2,” respectively. This terminology parallels the “M1” and “M2” macrophage nomenclature, which has also been applied to microglia in the CNS.

In this study they talk about astrocytes, as being bad (A1) and good (A2) guys.

A1 (Toxic) astrocytes, which are induced by injury, neuroinflammation, and neurodegenerative disease, produce proinflammatory molecules.


A2 (Trophic) astrocytes secrete molecules that provide neurotrophic support and modulate inflammatory responses. This astrocyte phenotype is present following ischemia and has been shown to promote neuronal survival and tissue repair.

They showed that three proteins called interleukin-1 alpha. This is an immunoregulatory molecule that can help production of tumour necrosis factor alpha, which is another one of the proteins that has immunoregulatory function and  complement component 1, Subcomponent q, which is part of the antibody killing pathway and a molecule involved in cell aging drive the production of A1 astrocytes.

So can block them?

There Interleukin_1_receptor_antagonist, which mops up IL-1 but you would need loads of it to get into the brain and being a protein this isn’t going to happen very much. Same problem is for the neutralizing antibodies available and as IL-1 has some many function, block this pathway every where long term-isn’t going to be good news. As for C1q, well we have the humble aspirin.

There are lots of anti-TNFs that are available, but they can stimulate memory B cells and they can and sometimes do make MS worse.

However this study indicates that you want the anti-TNF need to get into the brain, so antibodies are not the sensible way to go this. However there are anti-TNF chemicals such as thalidomide and less tetragenic (creates deformities in unborn babies) variants. Their are phosphodiesterase 4 inhibitors (PDE4) like rolipram which has made MS worse and ibudilast which has completed a trial in SPMS recently. We showed many years ago that you needed to inhibit the TNF in the brain

These molecules all come from hot microglia, which in this study was mimicked by an infection

Once the A1s had become the bad guys you didn’t need to keep giving them the three cytokines to keep them bad. Once formed they were mean bad-ass cells for good.

However they could be salvaged and it was found that it was partially possible to make the cells more astrocyte like again.

This was done by treating A1 astrocytes with the anti-inflammatory molecules transforming growth factor beta , a cytokine with immunoregulatory activity and Fibroblast growth factor cytokine that makes fibroblasts grow in part turns them back into a normal astrocyte.

So great let’s stick TGFbeta into MS and that’s sorted?

The trial was stopped because TGFbeta did not just do what they wanted but it bound to TGFbeta receptor where ever it was and activated the cells it bound to.

This just happened to be fibroblasts (which are involved in tissue modeling), they grew like mad and cause fibrosis of the kidney.
In nature, TGF-beta is not produced as an active molecule. The active site is covered by a latent protein cap/shell that has to be cleaved to make an active molecule. This means it can travel round the body and is not active thing unless there is the right environment, such as inflammation, to cleave the latent protein.

Likewise if we start injecting Fibroblast growth factor,I now think you can what would happen…..yep probably more fibrosis in the kidneys and liver and the lungs which are going to filter the proteins.

A1 astrocytes lose many typical astrocytic functions. They showed that A1 astrocytes no longer promote neuronal survival, outgrowth, and synapse formation, or phagocytize synapses or debris. 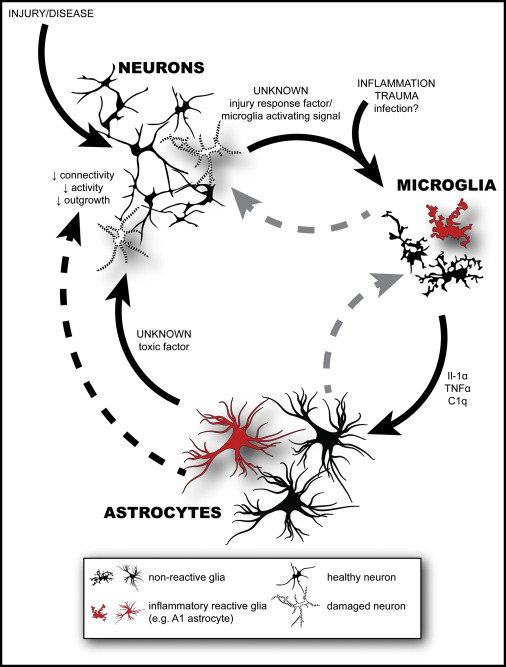 Importantly they suggest that A1 astrocytes secrete a compound that is toxic to neural cells.  What is it/are they?

Well a recent paper suggests something

d-Serine is a co-agonist at forebrain N-methyl-d-aspartate receptors (NMDAR) and is synthesized by serine racemase (SR). A1 reactive astrocytes express SR and release d-serine under pathologic conditions, which may contribute to their neurotoxic effects by activating extra-synaptic NMDA receptors.

So we have the hot micorglia. One way to get these as shown here was via toll-like receptor 4 and infection signals. But we can bring in other ideas in how B cells and B cell products could be key drivers in creating the hot microglia.


So the axis of evil could be