Now the geneticists are getting involved with suggesting B cells are important in MS.


Was our paper on B cells in MS so ace and compelling?:-)

or are they on the anti-CD20 gravy train?

CD40 is a costimulatory protein found on antigen presenting cells and is required for their activation.

The binding of CD154 (CD40L) on TH cells to CD40 activates antigen presenting cells and induces a variety of downstream effects.

The B cell can present antigens to helper T cells. If an activated T cell recognizes the peptide presented by the B cell, the CD40L on the T cell binds to the B cell’s CD40 receptor, causing B cell activation. The T cell also produces IL-2, which directly influences B cells. As a result of this net stimulation, the B cell can undergo division, antibody isotype switching, and differentiation to plasma cells. The end-result is a B cell that is able to mass-produce specific antibodies against an antigenic target.

Early evidence for these effects were that in CD40 or CD154 deficient mice, there is little class switching or germinal centre formation, and immune responses are severely inhibited.

CD40 is also expressed on B cell precursors in the bone marrow, and there is some evidence that CD40-CD154 interactions may play a role in the control of B cell (haematopoiesis) development.

This drove people to target CD40-CD40L to block B cell activity in autoimmunity.


In Phase II clinical trials regarding multiple sclerosis and Crohn’s disease, thromboembolisms occurred in at least three patients. A causal connection could not be proven, but since the same adverse effects were seen in trials with a similar antibody (hu5C8), the trials were halted.

CD86 and B7-2) is a protein expressed on antigen-presenting cells that provides costimulatory signals necessary for T cell activation and survival. It is the ligand for two different proteins on the T cell surface: CD28 (for autoregulation and intercellular association) and CTLA-4 (for attenuation of regulation and cellular disassociation). CD86 works in tandem with CD80 to prime T cells and is present on B cells

They found that carrying the risk allele rs4810485*T lowered the cell-surface expression of CD40 in all tested B cell subtypes. There was an increased proportion of alternative splice-forms leading to decoy receptors (P = 4.00 × 10-7) which would not signal. This CD40 allele was associated with decreased levels of interleukin-10.  This suggests that B cells might have an important antigen presentation and immunoregulatory role in the pathogenesis of multiple sclerosis 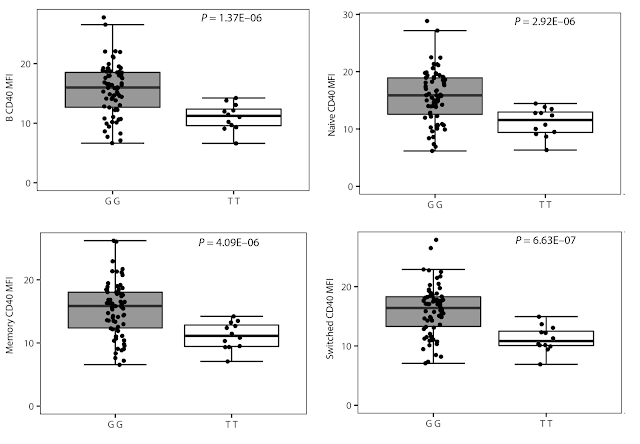 The risk allele rs9282641*G increased the expression of CD86..abit with this effect primarily seen in the naïve B cell subset. However I must say this failed the smack you in the eye test.

The authors suggest that “B cells might have an important antigen presentation and immunoregulatory role in the pathogenesis of multiple sclerosis”.

Indeed they may but it has to be said that dendritic cells, which are professional antigen presenting cells, express masses more CD40 and CD86 and so this could be where the true susceptibility association occurs.


Also one wonders whether this reduced CD40 means that it is easier for the latent membrane protein 1 produced by EBV to mimic CD40 signalling to cause pathogenic B cells to be CD40L and T cell independent, meaning that it would be easier to activate the B cell .

Many of the 200  or so identified susceptibility MS genes are immune-associated and many are thought to be involved in T cell biology such as the IL-2 receptor and the IL-7 receptor.


However, these are both expressed by B cell lineage cells, so more evidence for the  B club;-).