CSF neurofilaments are ready for prime time. Do you agree? Wouldn’t you as someone with MS not want to know what their CSF NFL levels were? 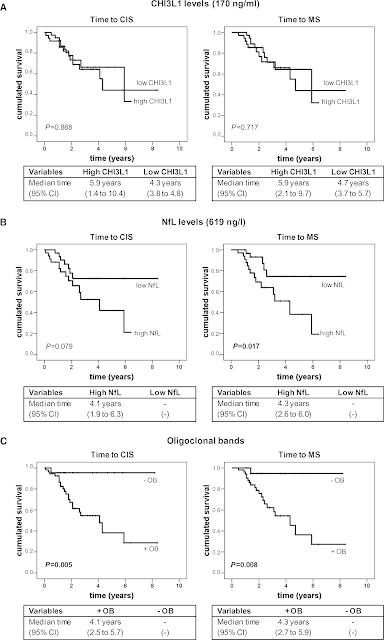 Figure:Kaplan-Meier curves for time to CIS and time to multiple sclerosis in RIS patients according to high and low CSF CHI3L1 (A) and NfL levels (B) and (C) positive and negative oligoclonal bands.


Ideas are the next currency of the world, and I believe this is where biomarkers have the greatest impact to make in MS. At Barts Health we offer CSF neurofilament levels (NfL) on the NHS; the feedback from clinicians who have used the test has been incredible – one colleague even described it as revolutionary and the best invention in MS in the last 10 years.


Comabella’s team have examined three important biomarkers in the CSF (cerebrospinal fluid, obtained via a lumbar puncture) as predictors of developing the first clinical symptoms of MS (i.e. CIS) or MS itself (more than one clinical event) when you simply have an abnormal MRI (RIS or asymptomatic MS or non-specific symptoms):

It is known that high CSF levels of both NfL and CHI3L1 predict the conversion of CIS to MS. In addition, the presence of CSF OCBs also increase the risk of developing MS, so much so that it is now possible to diagnose MS at the first presentation simply by having a positive OCB result in addition to an abnormal MRI (i.e. instead of waiting for the next lesion to appear on MRI as demonstration dissemination in time [DIT], positive OCBs can now be substituted for DIT).


And not surprisingly as this is all one disease, the investigators found that not only were these biomarkers useful in predicting conversion to MS from CIS but also RIS.


Seventy-five RIS patients were studied and followed up on average 2.8y. Around 31% converted to CIS within 2y and of this 91% were later diagnosed as having multiple sclerosis. CHI3L1 was not very useful, but, both NFL and OCBs were independent risk factors for conversion to CIS and multiple sclerosis from RIS. Other factors which were not found to be useful predictors of conversion were age, number of T2 brain lesions on MRI, gender and treatment. Moreover, high NfL levels and a positive OCB were associated with shorter time to conversion to CIS and MS (see figure above). Only with CSF NfL was the age <37y was found to be a predictor for shortening the time of conversion of RIS to CIS and MS (whether this is because there is an increase in age-related axonal loss as you get older is not known).


In summary, although treatment of RIS outside of the US is controversial, the results from this study make it tantalizing enough to intervene early in those with raised CSF NFL and positive OCBs.