What is a nerve impulse? How does a nerve axon generate it and allow signalling using impulses from one place to another?


The impulse may be thought of as a message or wave.  A ‘message’, for example on a telegraph, or a ‘wave’ in the sea initiates at one point and ends up elsewhere. The message needs the medium: the wave may have travelled great distances, but it cannot exist without the sea, whereas the sea itself has not moved. Likewise, the anatomical connectivity of an axon does not change as impulses are transmitted. A telegraph message requires an unbroken line. If the telegraph line somewhere between Laramie and Denver in the old West is broken, then the message does not get through and the bandits might escape justice. There is a similarity here with the nerve impulse and the axon. The axon has to make the impulse and provide a conduit for its conduction.

You also have the idea that a wave has an energy that must be somehow provided. So for light waves in a torch, there must be a working battery that’s switched on. Or a storm out in the Atlantic can make a wave on the sea. A message or a wave requires energy, and so does a nerve impulse. The message or wave requires a medium to allow travel. The nerve impulse is dependent upon the axon for its initiation, maintenance and propagation, and the energy to make nerve impulses comes from our food. 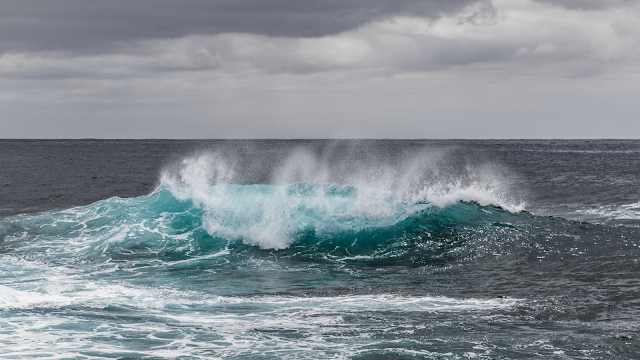 The energy to make a wave may be provided far out to sea, and then the wave propagates long distances.

The nerve impulse itself is a brief change in electrical potential across the membrane of the nerve (taking something like one half of one-thousandth of a second to occur). This depends on the distribution of salts in solution (inside and outside the membrane) and on remarkable proteins controlling which of these salts can cross the membrane.

Some of these proteins are called sodium channels, but they certainly require their own blog post, as they are so fundamental and so important. When those proteins change their state, they can generate a change in electrical potential across the membrane.

Such a change in electrical potential produces an event, but to turn it into a message, it has to travel without being diminished. The nerve fibre helps to do just that because it has the salt controlling proteins all the way along its length, and they are assigned to the impulse, as the impulse travels along the nerve. This event changes less and less as it moves along, and would peter out without help, but it can’t because of the way the sodium channels in the membrane of the nerve actively amplify it. On the other hand, if you block the sodium channels with a drug, like a local anaesthetic, then you can block impulse conduction.

One thought might make this easier to explain, and this is that the nerve axon has to set up a battery beforehand, in order to make the impulse. The way it does this is by using the energy in food to sort charged particles of salt and distribute them in an unequal way on either side of the nerve membrane. These charged particles of salt are called ions. Using energy, the nerve arranges for there to be many fewer sodium ions on the inside of the membrane than the outside. It tries to exclude sodium ions from inside the axon. 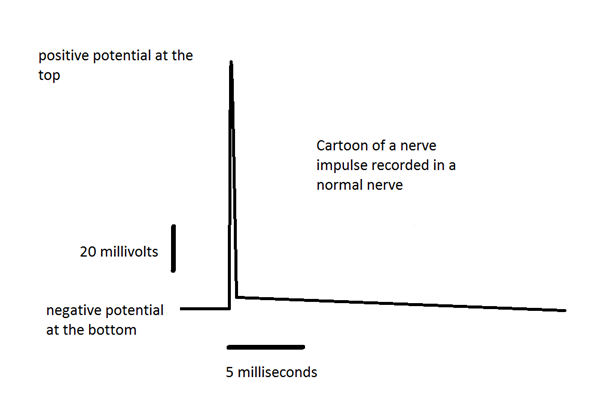 The nerve impulse is the biological equivalent of a TTL pulse in electronic communication. It is propagated change in electrical potential, lasting about 0.5 milliseconds at one point, but there is a tail on it, or a so-called after potential, so the axon is affected by the passage of the impulse for a little while afterwards

How is an impulse initiated? It is initiated by another electrical signal arising in a neuron, for example, or at a sensory nerve ending, that causes the sodium channels at one end of the axon to switch on. The impulse is then propagated away from that locality by the presence of other sodium channels distributed along the length of the axon.

How fast does a nerve impulse propagate along an axon?

Up to about 50 or 60 metres per second in humans, that is over 200 km per hour, or over 125 miles per hour, if you want. So you need a sports car and an autobahn to replicate such fast transmission. 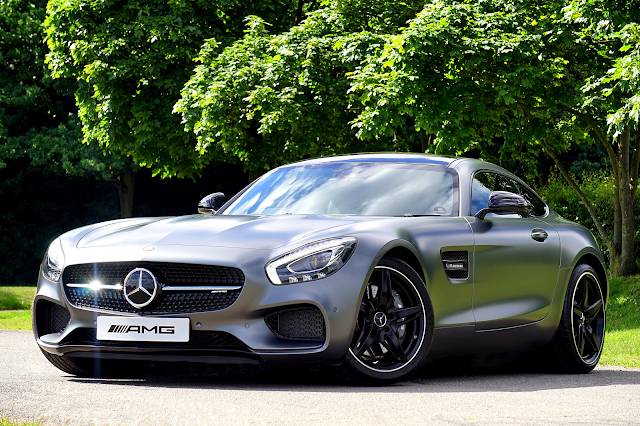 You need a fast car to beat a nerve impulse.

I’ll explain more about axons in my next post. Please ask me any questions below!