Ageing is part of the MS process.
If you are interested in what genes are turned on read here.

Using a standardized autopsy procedure including systematic dissection from standard locations, 3188 tissue blocks containing 7562 MS lesions were dissected. Unbiased measurements of lesion load were made using the tissue from standard locations. Lesion demyelinating and innate inflammatory activity were visualized by immunohistochemistry for proteolipid protein and human leukocyte antigen. Lesions were classified into active, mixed active/inactive (also known as chronic active), inactive or remyelinated, while microglia/macrophage morphology was classified as ramified, amoeboid or foamy. The severity score was calculated from the time from first symptoms to EDSS-6. Lesion type prevalence and microglia/macrophage morphology were analyzed in relation to clinical course, disease severity, lesion load and sex, and in relation to each other.

This analysis shows that

(2) patients that had a more severe disease course show a higher proportion of mixed active/inactive lesions (p = 6e-06) and a higher lesion load (p = 2e-04) at the time of death,

(4) males have a higher incidence of cortical grey matter lesions (p = 0.027) and a higher proportion of mixed active/inactive lesions compared to females across the whole cohort (p = 0.007).

People with Advanced MS had more lesions, so stop lesions from occurring


People with relapsing remitting disease had more evidence of repair

“There is considerable heterogeneity in MS lesion pathology between pwMS, and lesion characteristics show strong correlations with clinical course, severity and sex. This study shows that inflammatory lesion activity is substantial at the time of death in progressive pwMS with long-standing disease. In addition, pwMS that have had a shorter time to EDSS-6 have a higher lesion load and proportion of mixed active/inactive (chronic active) lesions. Males have a higher cortical grey matter lesion incidence and proportion of mixed active/inactive lesions across the whole cohort. pwMS with a progressive disease course have a higher lesion load and less remyelinated lesions compared to relapsing rwMS. Mixed active/inactive lesions are increased in progressive pwMS.”


PwMS need anti-inflammatory treatment in addition to neuroprotective/repair treatments so monotherapies targeting just the latter elements is not science based.


This study looks at genes being activated in old microglia. You can have a look if you like as it’s open access

With a rapidly aging global human population, finding a cure for late onset neurodegenerative diseases has become an urgent enterprise. However, these efforts are hindered by the lack of understanding of what constitutes the phenotype of aged human microglia, the cell type that has been strongly implicated by genetic studies in the pathogenesis of age-related neurodegenerative disease. Here, we establish the set of genes that is preferentially expressed by microglia in the aged human brain. This HuMi_Aged gene set captures a unique phenotype, which we confirm at the protein level. Furthermore, we find this gene set to be enriched in susceptibility genes for Alzheimer’s disease and multiple sclerosis, to be increased with advancing age. These findings confirm the existence of an aging-related microglial phenotype in the aged human brain and its involvement in the pathological processes associated with brain aging. 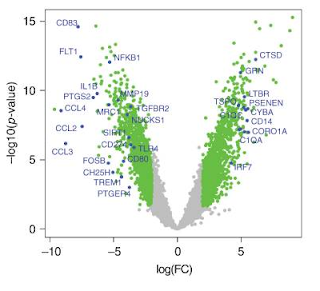 The phenotype of aged human microglia. Functional annotation reveals that human microglia aging manifests itself as loss of function as well as gain of function changes in phenotype. a Volcano plot depicting the results of differential gene expression analysis between the Zhang et al. (middle aged microglia; N = 3) and our dataset (aged microglia; N = 10). One thousand sixty genes were found to be upregulated while 1174 genes were downregulated with aging.