Twice in the past couple of months I’ve been reduced to tears because I’ve seen media stories about people with hidden disabilities being treated appallingly by people in customer-facing positions who should be the ones leading the way when it comes to helping those who might need that extra bit of help. In both the stories, the two women were told they didn’t “look disabled.”

As someone with MS who most of the time looks perfectly healthy, it’s something that really resonates. I hope that you will share this post far and wide, if nothing else so that every individual who reads this will remember that old saying “don’t judge a book by its cover.”


STORY 1 – the lady who needed the toilet
Perdi Parris has multiple sclerosis and one symptom is bladder issues. She was at a Slug & Lettuce pub and was barred by the security guard (who works for a third party) from using the disabled toilet. She had a radar key to access the toilet (which is locked from the outside and only accessible by people with radar keys) and had two forms of ID that confirmed her condition. Read more.

STORY 2 – the lady who booked special assistance at the airport only to be told “you don’t need it”
Nathalie Allport-Grantham has Ehlers-Danlos syndrome and Marfan syndrome. She had pre-booked special assistance when flying from Stansted Airport on Ryanair. She uses a wheelchair some of the time but not all. She was given a wheelchair on arrival but it was taken away when she reached the lounge and wasn’t returned. She was forced to walk to the gate, where she was expecting help to board the plane. She explained to the special assistance staff (special assistance is contracted out to Omniserv) that she’d booked assistance and she needed help to board. They essentially told her she didn’t look disabled enough. They said she’d have to pay £50 to check her bag into the hold if she couldn’t carry it herself, that she should be queuing up with everyone else to board the plane, and that she was wasting their time. Read the full story.

What can we learn from this?

1. Not all disabilities are visible: There’s no excuse these days for people to say “you don’t look disabled.” We can’t see mental health issues or learning difficulties; we can’t see pain, bladder issues, bowel issues, cognitive issues. Often it may not be immediately apparent if someone is visually impaired or hearing impaired. In fact the list goes on. The only time someone may ever actually “look” disabled is if they’re missing a limb* or some other visible part of the body, using a wheelchair or carrying a stick. I don’t know the statistics, in fact I don’t even know if there’s been any sort of survey as to how many people in the UK live with invisible disabilities, but I’d bet you anything that there are far more people out there with hidden disabilities than visible ones. So, if you want to be seen as disability-friendly you need to remember that many of the people you come across aren’t going to “look” disabled.
* Sometimes that might not even be apparent straight away. I know several amputees and when I first met them I didn’t realise they were missing limbs!

2. Don’t pass the buck: The companies that will be remembered out of these stories will be Slug & Lettuce, Stansted and Ryanair. Not Omniserv and not the security company at the pub. There’s no point in saying to a customer that you have fantastic accessibility, diversity and inclusion policies if you then contract out a service and don’t take responsibility for what that company’s staff do on your premises and on your behalf. You’re just as much at fault and it’s your reputation that will also be damaged. I know plenty of people with MS who have been talking about boycotting Slug & Lettuce pubs – I’ve heard no mention of them writing to the security company or boycotting them!?

3. Don’t make it harder for us when it can be difficult enough to admit to ourselves that we need help in the first place: I’ve always been independent and I hate having to ask for help. However, sometimes it’s necessary in order to get the best out of me or a situation. I’m not alone. I know many people with invisible disabilities who find it hard to ask for help. Don’t make it harder for us by humiliating us and suggesting that we’re fakes when we do actually ask.

4. It’s not your place to judge if someone needs help: Do you know the person that you’re talking to and what they go through on a daily basis? No. Then you have no right to judge whether someone who has asked for help actually needs it. You have no idea what effect walking for just five minutes might have on someone. You have no idea whether making someone wait in a queue for the toilet will result in them wetting themselves. I once had to give a detailed account to a theatre usher of what would happen if my friend who has ulcerative colitis wasn’t told immediately where the disabled toilet was when we were out to watch a play. The usher had told him he couldn’t use the disabled toilet because he wasn’t in a wheelchair and refused to tell him where in the building it was. I’ll never forget the look of panic on my friend’s face. It’s something you should never have to see – a full grown adult scared “shitless” (excuse the pun and the language) that he was going to embarrass himself there in front of everyone. So, if someone has asks for help, just give it to them willingly and with a smile on your face. At the end of the day, you don’t know what’s going on within that book cover.

5. Finally, be human and have some faith in humankind: Do you really think that someone is so lazy that they’ll go to the trouble of booking special assistance because they don’t want to walk on the plane themselves or wait in a queue like everyone else? Do you really think someone is so desperate to use a disabled toilet that they’ll go to the trouble of getting a radar key and deny the use of the facility for someone who is disabled? Seriously, have some faith in humankind. Yes, there will always be people out there who take advantage of the system, I’m not saying there aren’t. However, they’re in a tiny minority. The vast majority of people wouldn’t dream of taking advantage of the system and, therefore, the people who you are dealing with are more than likely genuine. We should be a society that helps those who need it, not one that is suspicious of them.

After posting the two stories on social media, I had people comment saying that they’d been put off applying for a blue badge because they were worried they’d be judged and abused by people for using a disabled parking space when they’re not in a wheelchair (it happens a lot!). I’ve also had people comment saying they won’t fly or use public transport because they’ve heard about others’ bad experiences. If this blog post can help to increase understanding so people with hidden disabilities no longer feel like this, then it’s done its job. 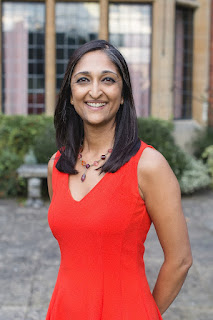 
Trishna is a multi-award winning advocate for people with multiple sclerosis and chronic illness. Diagnosed with RRMS in 2008, aged 28, she’s used her experiences to raise awareness and improve support for people affected by MS and other chronic illnesses. A full-time Spanish-English translator, in her spare time she collaborates with organisations in the UK and abroad, including charities, pharmaceutical firms and nonprofits, to help improve patient experience and engagement. She’s a writer, blogger, vlogger and inspirational/expert patient speaker, as well as advising on projects, research proposals, and diversity strategies, and is a regular contributor in the media for issues relating to MS, chronic illness and disability. She’s a patron/ambassador for several MS/disability charities and is currently a member of “The Ozone” virtual roundtable for key opinion leaders across healthcare specialities. You can follow her on Twitter @TrishnaBharadia and Facebook http://www.facebook.com/trishnabharadia2015&nbsp;