ProfG and DrK were in the media yesterday as they launched their #Thinkhand campaign.


Yep this is old news on the blogsphere, but the Evening Standard (Local London Newspaper) picked up the story and pulled a fast one 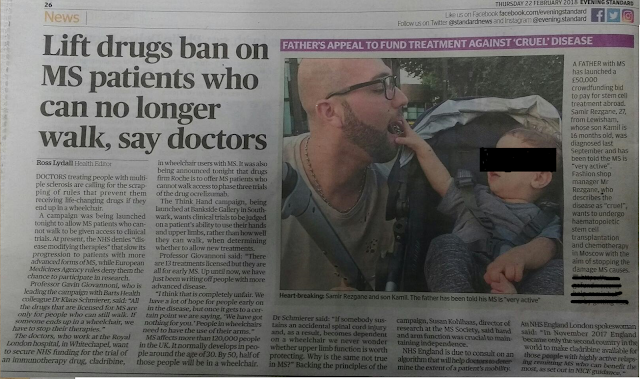 Lift drugs ban on MS patients who can no longer walk, say doctors

Doctors treating people with multiple sclerosis are calling for the scrapping of rules that prevent them receiving life-changing drugs if they end up in a wheelchair.
A campaign was being launched tonight to allow MS patients who cannot walk to be given access to clinical trials. At present, the NHSdenies “disease modifying therapies” that slow its progression to patients with more advanced forms of MS, while European Medicines Agency rules deny them the chance to participate in research.
Professor Gavin Giovannoni, who is leading the campaign with Barts Health colleague Dr Klaus Schmierer, said: “All the drugs that are licensed for MS are only for people who can still walk. If someone ends up in a wheelchair, we have to stop their therapies.”
The doctors, who work at the Royal London hospital, in Whitechapel, want to secure NHS funding for the trial of an immunotherapy drug, cladribine, in wheelchair users with MS. It was also being announced tonight that drugs firm Roche is to offer MS patients who cannot walk access to phase three trials of the drug ocrelizumab.
The Think Hand campaign, being launched at Bankside Gallery in Southwark, wants clinical trials to be judged on a patient’s ability to use their hands and upper limbs, rather than how well they can walk, when determining whether to allow new treatments.
Professor Giovannoni said: “There are 13 treatments licensed but they are all for early MS. Up until now, we have just been writing off people with more advanced disease.
“I think that is completely unfair. We have a lot of hope for people early on in the disease, but once it gets to a certain point we are saying, ‘We have got nothing for you.’ People in wheelchairs need to have the use of their arms.”
MS affects more than 120,000 people in the UK. It normally develops in people around the age of 30. By 50, half of those people will be in a wheelchair. Dr Schmierer said: “If somebody sustains an accidental spinal cord injury and, as a result, becomes dependent on a wheelchair we never wonder whether upper limb function is worth protecting. Why is the same not true in MS?” Backing the principles of the campaign, Susan Kohlhaas, director of research at the MS Society, said hand and arm function was crucial to maintaining independence.
NHS England is due to consult on an algorithm that will help doctors to determine the extent of a patient’s mobility. An NHS England London spokeswoman said: “In November 2017 England became only the second country in the world to make cladribine available for those people with highly active relapsing remitting MS who can benefit the most, as set out in NICE guidance.”
The article was used to support a Crowd-funding request for someone to go to Moscow for HSCT. Whilst we we wish the individual every success in getting treatment for their condition, this had nothing to do with TeamG.
We offer HSCT are part of our MS Service, but you do not have to travel to Moscow for this.