Will this study get the field behind the EBV hypothesis once and for all? Or will it be another bun fight?

Epstein-Barr virus is present in the brain of most cases of multiple sclerosis and may engage more than just B cells.

Multiple sclerosis (MS) is a chronic neuroinflammatory condition of the central nervous system (CNS). It is a major cause of neurological disability in young adults, particularly women. What triggers the destruction of myelin sheaths covering nerve fibres is unknown. Both genetic and infectious agents have been implicated. Of the infectious agents, Epstein-Barr virus (EBV), a common herpesvirus, has the strongest epidemiological and serological evidence. However, the presence of EBV in the CNS and demonstration of the underlying mechanism(s) linking EBV to the pathogenesis of MS remain to be elucidated. We aimed at understanding the contribution of EBV infection in the pathology of MS. We examined 1055 specimens (440 DNA samples and 615 brain tissues) from 101 MS and 21 non-MS cases for the presence of EBV using PCR and EBER-in situ hybridization (EBER-ISH). EBV was detected by PCR and/or EBER-ISH in 91/101 (90%) of MS cases compared to only 5/21 (24%) of non-MS cases with other neuropathologies. None of the samples were PCR positive for other common herpesviruses (HSV-1, CMV, HHV-6). By quantitative PCR, EBV viral load in MS brain was mainly low to moderate in most cases. However, in 18/101 (18%) of MS cases, widespread but scattered presence of EBV infected cells was noted in the affected tissues by EBER-ISH. Immunohistochemical analysis of EBV gene expression in the 18 heavily infected cases, revealed that the EBV latent protein EBNA1, and to a lesser extent the early lytic protein BZLF1 were expressed. Furthermore, using double-staining we show for the first time that astrocytes and microglia, in addition to B-cells can also be infected. To the best of our knowledge, this is the most comprehensive study demonstrating that EBV is present and transcriptionally active in the brain of most cases of MS and supports a role for the virus in MS pathogenesis. Further studies are required to address the mechanism of EBV involvement in MS pathology. 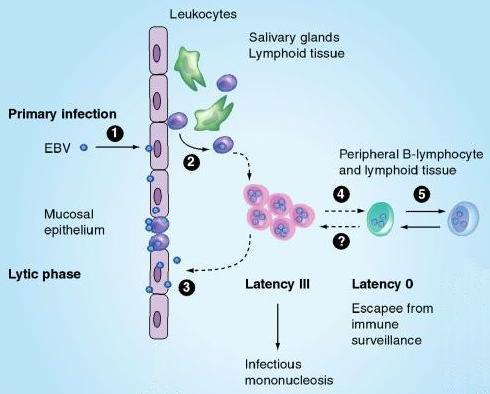 -The Scarlett Pimpernel by E Orczy

No really! The cause of MS is as elusive as the Pimpernel was to the French. Despite mounting evidence, no research group has yet successfully managed to nail EBV to MS. This work by Hassani and colleagues is hope that it may yet happen!

Epstein-Barr virus (EBV) is a member of the Herpes family of viruses and is common in humans. It’s target is B cells and can remain dormant or latent in memory B cells for their lifespan. A small percentage, however, do reactivate in what is called the lytic phase.

EBV is associated with more than one disorder, but is thought in MS at least it causes a virus-host immune system response imbalance, with the immune response to the virus to the virus itself being disrupted (Sundström P, Juto P, Wadell G, Hallmans G, Svenningsson A, Nyström L, et al. An altered immune response to Epstein-Barr virus in multiple sclerosis: a prospective study. Neurology. 2004;62: 2277–2282). Almost all PwMS demonstrate evidence of previous EBV infection, and those who have not been exposed (i.e. seronegative) have almost zero risk of developing MS. The spanner in the works is that ~95% of those without MS have also had previous EBV exposure (Ascherio A, Munch M. Epstein-Barr virus and multiple sclerosis. Epidemiology. 2000;11: 220–224).

The question then becomes can you place EBV successfully in the brain where it can cause MS? And that is what the authors have done. Hassani et al, examined the presence of EBV in 122 post-mortem MS brains and non-MS brains. Others have tried to do this in the past but not successfully for any number of reasons – techniques, sampling etc. They used a PCR technique and a highly sensitive and specific EBER- in situ hydridization (EBER-ISH) technique to localise EBV infected cells in brain tissues.

Surprisingly, they found that EBV was present in 90% of MS cases, but also found no presence of other viruses, such as HSV-1, CMV and HHV-6 that have been previously implicated in MS. Of note, they also found that not only did EBV target B cells, but also infected ~10-15% activated microglia and astrocytes (the innate immune system, see Figure). Therefore, the role of EBV in the inflammatory cascade needs to be looked at in greater detail.

Overall, a very interesting paper and others will now have to re-examine EBV in MS brains using the more sensitive techniques in order to identify scattered and low level EBV infection.

Figure: Double staining for EBV and cellular markers.
Double staining for EBV (EBER-in situ hybridization: dark blue staining) and different cellular markers (immunohistochemistry: brown) in the white matter of 3 different heavily infected MS cases. The pattern of double-staining seen in these 3 cases is representative of that seen in other double-positive cases. (A) EBV and CD20 (B-cell marker), (B) EBV and GFAP (astrocyte marker), (C) EBV and Iba1 (microglia marker). Double positive cells are indicated by the arrows.