As a follow up from my previous post on ‘Why is MS more common in women?‘ I thought I’d respond to some of your comments and questions…


As discussed in the previous post, MS is almost 3 times more common in women compared to men and we came to the conclusion that there is a hormonal link, but this may not be the whole reason for the difference between the sexes. It should be noted that sex-differences which could affect MS lie not only in the hormones but also genetics (women have an increased immune response to infection, believed to be the reason for a higher incidence of autoimmune disorders), chemical messengers (e.g. higher levels of the IL-33 cytokine in men, which limits the development of a destructive immune response), and the microbiome (which we all know is a hot topic in MS at the moment).

X-chromosomes (women have XX, men have XY) carry many genes which code for immune-modulating receptors, cytokines, and proteins regulating transcription and translation (processes needed for the conversion of DNA in to proteins to be used in the body). The X-chromosome is also home to the MS associated retrovirus (MSRV) gene, which can affect susceptibility and severity of MS. Therefore, it makes sense that having a double dose of the X-chromosome would affect immunity and potential risk of MS in women.

Comments were made on the previous blog post referring to vitamin D and this topic. Indeed, there is an immune tolerance mechanism in females which requires the interaction of estrogen and vitamin D, which could further contribute to the sex bias. However, if genetics are largely to blame, then it is surprising that juvenile (pre-pubertal) MS shows no sex-preference. Interestingly, relapse rates tends to be higher during puberty than post-puberty. 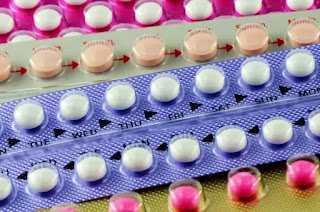 Many people were interested in the impact of the menopause on MS, and it seems that the EDSS rate of progression post-menopause is worse than pre-menopause (whether a natural or surgical menopause). There is also a tendancy of conversion to SPMS around the age 45, which may be linked, or explain this inflection in EDSS scores. Progression of EDSS scores post-menopause may also be linked to the post-menopausal decrease in estrogen, which is neuroprotective. Interestingly, late onset MS (age 50+) shows far less sex difference than average onset. So do female hormones increase risk of developing MS but decrease rate of progression?

An association has also been found between MS and gender identity disorders in male-to-females, and men who became women showed a 7x higher risk of MS. These findings also suggest a role of low testosterone and/or feminising hormones in the onset of MS.

So, hormones, vitamin D and genetics may all play a role in the increased rate of MS in women compared to men. I hope this answers some of your questions and I’m sure it will also raise some more!