Last year we suggested that all agents that currently are used to inhibit MS, all target memory B cells.


We didn’t have the data on whether cladribine depletes memory B cells, but as cladribine is highly effective in treating relapsing MS.
It suggests that they should be depleted.


The hypothesis can be tested, as we have been using cladribine off-label.


If you want to know the answer…read on

The makers of  oral cladribine have made a point of telling us that that cladribine acts on T and B cells and that T cells are not markedly depleted and that the CD19 population is back to normal, yet the drug is active for years.
So how does it work?….It’s magic!

Well not really…..its biology! However, you have to uncover the biology to understand how cladribine works.

So as background information.
You can make proteins in two ways :
(1) De Novo– you make the building blocks of proteins (amino acids/nucleosides) from scratch.

(2) Salvage pathway. You take proteins and break them down and re-use the amino acids/nucleosides to make new proteins.

Lymphocytes secrete a lot of protein and divide to make new lymphocytes. Therefore they use the de Novo and the salvage pathways of protein synthesis extensively.

One route for one of the salvage pathways uses adenosine deaminase and this makes inosine from adenosine, which is a nucleoside building block used to make amino acids.

Adenosine can get phosphate groups added to it to make adenosine triphosphate = ATP = adenosine + three phosphate groups, which is often referred to as the “molecular unit of  intracellular energy transfer. When consumed in metabolic processes, it converts to either the di (two)- or monophosphates (one), respectively ADP and AMP. Other processes regenerate ATP such that the human body recycles its own body weight equivalent in ATP each day. It is also a precursor to DNA and RNA.

Adenosine is phophorylated to AMP (adenosine monophophate) by an enzyme called deoxycytidine kinase and then to ATP by other  enzymes.  However, deoxycytidine is in limited supply so this controls the phophophorylation process.

This process is countered by cytoplasmic 5 prime nucleotidases (5′-NT) which dephophorylate (remove phosphate groups) from ATP, ADP and AMP. These are also present in mitochondria (5’NTM) and on the cell surface (5’NTE (ecto)).

Therefore the production of ATP is countered by the action of 5’NT making adenosine from AMP and this is made into inosine by breakdown of adenosine by adenosine diaminase.

What a group from the Scripps clinic in USA did was make chlorinated adenosine (adenosine with a chlorine group) that was insensitivite to breakdown by adenosine deaminase, such that the drug was more likely to be phosphorylated and so it would kill lymphocytes.

This was called cladribine

The implication therefore is that the anti-JC virus response (PML) should not be affected too much.

In this study, we show that one year after treatment with cladribine or alemtuzumab that there is comparable and marked depletion of memory B cells, yet the level of severe lymphopenia induced with alemtuzumab was about 85% but <2% with our cladribine dosing scheme, suggesting a selective action of cladribine on memory B cells. Yes we need to do a proper time course


The observation of marked depletion of memory B cells  is consistent with the high efficacy of cladribine in relapsing MS.

How do we explain this?

We looked in cell culture, but we found that B cells die, even without any drug, in contrast to T cells which survive for some time without the need for growth factors. We (me & MD2) suspect this is why MS has become a T cell disease. This is because people can’t easily study B cell function in cell culture, so they have studied T cells and over time the B cell got forgotten. until rituximab and ocrelizumab, which depletes B cells and inhibits MS, woke people up.

However, we thought that we could explain what happens by looking at data in public data bases.

So when we look at the expression of deoxycytidine kinase we find that on the whole, B cells express more message and protein than T cells. Therefore B cells should be depleted more than T cells.

Different types of B cells expressed varying amounts of the phosphorylating enzymes. It was found that naive and memory cells express a lot and make it likely that they are killed by cladribine, especially as they also have low levels of cytoplasmic 5’NT and adenosine diaminase.


Neutrophils have low deoxycytidine kinase and high levels of 5’NT and so are not killed very much. This is what we found when we looked in the blood of people treated with cladribine. This means that you can still fight infections. 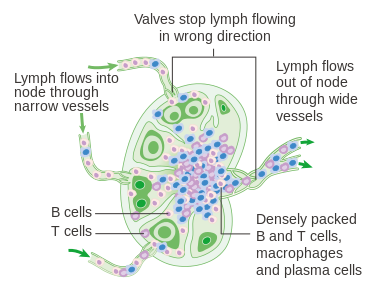 It was found that germinal centre cells (dark green circles in the diagram above), which divide to form memory cells had loads of deoxycytidine kinase and so will be probably killed the most. This will kill the precursors of B memory cells, notably the centroblasts in the B cell follicles (round green areas in the diagram above) of lymphoid tissue.  Plasma cells have lower levels of deoxycytidine kinase (see below) and so we predict that cladribine will not deplete antibody forming cells. This means that you shouldn’t loose your vaccine responses to childhood infections. 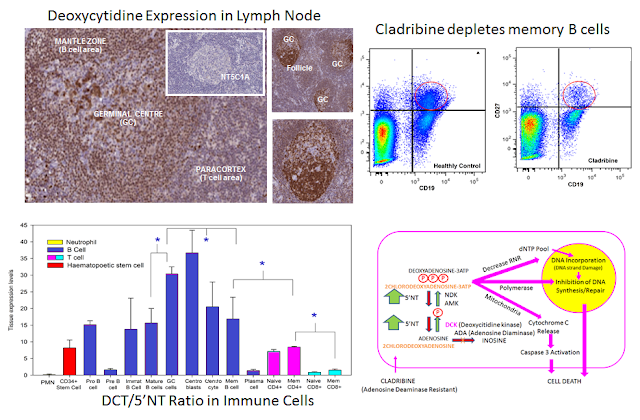 So after cladribine a number of different types of B cells get it.


However, we think the sensitivity to killing is not what causes a selective depletion of memory B cells. We believe that the major problem is that once depleted memory B cells repopulate very slowly from lymph glands and spleen. This can take many years for repopulation to occur. Maybe this is why the drugs (or HSCT) work for such a long time. This will cause long term inhibition of MS


This contrasts to the more rapid repopulation of immature and naive cells B cells coming from the bone marrow. This makes it look like CD19 cells come back to normal levels and masks the loss of the memory cells 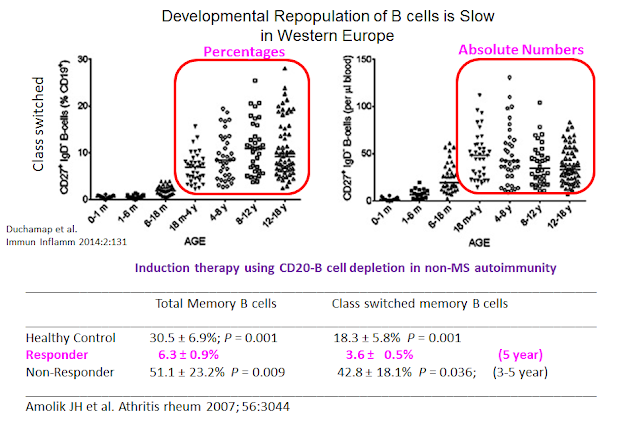 We currently believe memory B cell depletion is a common mechanism of action of MS treatments. Memory B cells are a reservoir of Epstein Barr virus and therefore cladribine will indirectly get rid of EBV.  EBV can make B cells become independent of T cell help so maybe you do not need T cells. At least we can put B cells at the top of the pile of important cells.

This concept is very, very, very challenging for many of our peers. They believe that T cells (notably CD4 T cells) are the top dog and the major problem in MS. It is the life’s-work of many influential people.


The thorn in the side is course…….evidence.


Depletion of CD4 T cells and depletion of Th1/TH17 does not do a great deal in MS. Yes this can do something in EAE but EAE is not MS and animals do not get infected with EBV, unless you are a non human primate.


Cladribine does not work in rodents because they have a different balance of deoxycytidine kinase, 5’NT and adenosine deaminase. So when you see claims in rodents, you know the study is probably pants.


Ocrelizumab (CD20-specific) is a B cell depleting agent that works well in MS, because I predict it depletes memory B cells very well.
The Tcellers either argue that T cells express CD20 or that B cells present antigen to T cells, such that T cells are the major mediators. They cannot entertain the concept that B cells are the top dog and that probably any involvement of T cells is to help B cells do their job.


You draw the same blank. It is all circumstantial.


It is hard to prove things categorically in humans. Just because EAE is a T cell-mediated problem is not sufficient argument.

Anyway, rather than spend endless time fighting with editors and referees, we decided to let you see the data. The paper is Open Access and so you can read and make your own mind up (click on the link below to get access to the paper).


Please feel free to send this link to your friends so that you can read the whole paper. This is relevant to the use of the oral variant too.
(There are no restrictions on the number of people you may share this link with, how many times they can view the linked article or where you can post the link online). If the link doesn’t work, click on the title below

If people disagree with the concept……that is fine. We will no doubt change or fine tune our minds as more evidence accumulates.


However, people should do the experiments to disprove the hypothesis for the central importance of (memory) B cells in MS.  Disproving ideas is how science evolves.

Over the past year there have been a lot of attempts to and these have so far failed.

Ceronie B, Jacobs BM,  Baker D, Dubuisson N, Mao Z, Ammoscato F,  Lock H, Longhurst HJ, Giovannoni G, Schmierer K. Cladribine treatment of multiple sclerosis is associated with depletion of memory B cells. J Neurol 2018;  https://doi.org/10.1007/s00415-018-8830-y
Background: The mechanism of action of oral cladribine, recently licensed for relapsing multiple sclerosis, is unknown.
Objective:To determine whether cladribine depletes memory B cells consistent with our recent hypothesis that effective, disease-modifying treatments act by physical/functional depletion of memory B cells.
Methods: A cross-sectional study examined 40 people with multiple sclerosis at the end of the first cycle of alemtuzumab or injectable cladribine. The relative proportions and absolute numbers of peripheral blood B lymphocyte subsets were measured using flow cytometry. Cell-subtype expression of genes involved in cladribine metabolism was examined from data in public repositories.
Results: Cladribine markedly depleted class-switched and unswitched memory B cells to levels comparable with alemtuzumab, but without the associated initial lymphopenia. CD3+ T cell depletion was modest. The mRNA expression of metabolism genes varied between lymphocyte subsets. A high ratio of deoxycytidine kinase to group I cytosolic 5′ nucleotidase expression was present in B cells and was particularly high in mature, memory and notably germinal centre B cells, but not plasma cells.
Conclusions: Selective B cell cytotoxicity coupled with slow repopulation kinetics results in long-term, memory B cell depletion by cladribine. These may offer a new target, possibly with potential biomarker activity, for future drug development.
https://link.springer.com/article/10.1007/s00415-018-8830-y
CoI: This is the work of TeamG (without any pharma input).