Bruton’s tyrosine kinase (abbreviated to BTK) also known as tyrosine-protein kinase BTK is an enzyme that plays a crucial role in B-cell development.


However, whilst ProfG has been munching on his chapeau, I’ve been doing some reading and am not ready to let the T cell boys and girls off the hook. More B cell magic….

BTK plays a crucial role in B cell maturation. Mutations in the BTK gene are implicated in the primary immunodeficiency disease X-linked agammaglobulinemia (Bruton’s agammaglobulinemia); sometimes abbreviated to XLA.


They do not make antibody because the cells making antibody have gone, so a functional depletion or an absolute depletion.


Patients with XLA have normal pre-B cell populations in their bone marrow but these cells fail to mature and enter the circulation.

BTK expression was up-regulated upon B cell receptor stimulation in vitro and was significantly expressed in CD27+ memory B cells. 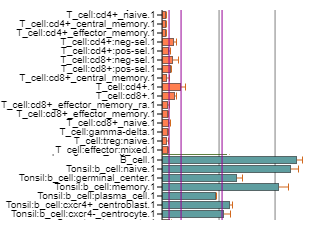 Know what happens with the therapeutic.


Has profG have been sold a dummy?


Maybe he is under the impression that there is no B cell depletion and it is functionally inhibiting the cells, but is it true?


Not in the mouse, its not.


We have been looking the “you know what drug”  at 12 months after drug there is no CD19 B cell depletion, but look at the memory B cell populations and they are still wiped out.


So what happenes to the Merck drug. It is an irrevesible drug, so once bound to the BTK it is inhibited.

Evobrutinib potently inhibited B cell receptor and FCReceptor signaling and subsequent activation and function of B cells.
In mouse models of Arthritis and Lupus, evobrutinib displayed robust efficacy as demonstrated by a marked reduction of disease severity… Efficacy correlated with B cell inhibition, reduction of autoantibodies, and decreased circulating memory B and T cells. Arthritis-like symptoms were inhibited in a arthritis model. Pharmacodynamic modeling showed that BTK occupancy of 60 and 80% was linked to 80% and near complete disease inhibition, in both the RA and SLE models, respectively.
Conclusion: These results demonstrate the potential of evobrutinib to treat autoimmune disease and may inform rational dose decisions as evobrutinib is advanced for development in rheumatologic diseases.

ProfG and you may be interested to know that