The pathogenesis of multiple sclerosis (MS) has not been clarified. In addition to environmental factors; genetic determinants have been implicated in the pathogenesis of MS. Furthermore, endogenous retroviruses (ERV) might play a role in MS. The presence of oligoclonal immunoglobulin in cerebrospinal fluid (CSF) is a typical feature of MS. Recently, genetic polymorphisms in loci on human chromosomes 6, 14 and 18 have been identified as major determinants of CSF antibody levels in MS. The functional relevance of these single nucleotide polymorphisms (SNPs) remains unclear and none of them is located in an open reading frame. In previous studies, we identified ERV sequences in the vicinity of MS associated SNPs. Here, we describe the identification of ERV sequences in the neighborhood of SNPs associated with CSF antibody levels. All of the identified SNPs are located in the vicinity of ERV sequences. One of these sequences has very high homology to a sequence derived from the so-called MS-associated retrovirus (MSRV). Another cluster of three ERV sequences from the immunoglobulin heavy chain locus has retained the typical organization of retroviral genomes. These observations might shed new light on a possible association between ERVs and MS pathogenesis. 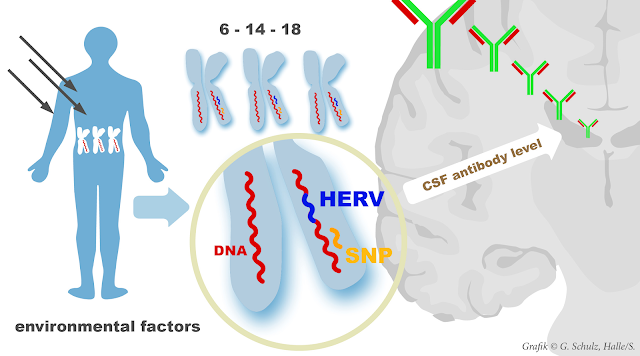 Figure: MS associated SNPs are located in the vicinity of ERV sequences

I’ve been reading a lot of poetry of late, so here goes nothing!!!

Viruses are hot to trot,
Hot off the press,
Hot on the heals of EBV,
Undisputably not full of hot air.

Anyway, back to the topic at hand…

Oligoclonal bands are a sign of immune response and the presence of antibodies in the spinal space. Genetic variations (or single nucleotide polymorphisms, SNPs) have been reported on chromosomes 6, 14 and 18 in regions involved in antibody production in MS. Endogenous retrovirus elements (are virus sequences in the human genome that are thought to be derived from retroviruses; viruses often insert a copy of their DNA into their host genome during their replication cycle, and once there are inherited through successive generations) have been also found in the human genome and may influence the expression of our own genes. Here, the authors put forward the theory that these ERV loci could drive the production of antibodies (the oligoclonal bands) in MS.


They note that surrounding the genetic polymorphisms is the presence of various ERV sequences. Particularly, surrounding the polymorphism rs9807334 on chromosome 18, the open reading frame that encodes a protease and reverse transcriptase, is highly similar to a sequence in MSRV (which has been strongly linked to MS) suggesting that ERV activity may influence antibody levels. Similarly, polymorphisms on chromosome 14 (which generates part of the antibody, specifically the heavy chain) and chromosome 6 (the Major Histocompatability Complex, a group of proteins by which foreign antigen recognition by the immune system occurs) that are more directly involved in antibody synthesis also contained in their vicinity retrovirus-like open reading frames.


It is therefore possible that during inflammation there may also be synthesis of proteins from these retroviral elements, which may generate a B cell response. Although, this needs to be investigated in greater detail.