Should we have off-label use of MS treatments, if it competes with pharma interest?

There are many that would not contemplate this view.
What do you think?
Rituximab is a CD20 depleting antibody that was originally developed for B cell cancers. Many years ago it was shown that rheumatoid arthritis responded well to deppletion of CD19 and it was only a matter of time before neurologists copied the arthologists and put it into MS. Prof Huser took up the challenge, being a stones throw from Genetech who made the antibody by creating a chimeric antibody of mouse monoclonal antibody against human CD20 and having human antibody tail.

It worked well in phase II studies but rather than plough on, development paused.

It was realised that rituximab did not have a long patent life and but by the time the clinical development for MS was completed the patent life would be over. Being a chimeric antibody it would be likely that an antibody response will get developed against this, so why not develop the humanised version and an antibody that was even more potent than rituximab?

As a consequence ocrelizumab was born and off they (Genentech (Roche)) went and started to develop ocrelizumab for lupus, arthritis and MS. Only one major problem happened.

This was that ocrelizumab was so good at getting rid of B cells, people started dying of infections, so the development of lupus and arthritis was halted. MS development was continued as it is a more serious problem (so people accept more risks) and MS is a cash cow when it comes to drug prices.

Ocrelizumab works very well to control MS, but that creates a problem because it says that rituximab can work very well. So what do you do? Do you use ocrelizumab with a price tag of  $65,000 (2017) when rituximab costs $4,000?

So we have three papers

Should lower cost alternate medications with comparable mechanisms of action, but without the proof from registration studies, be used in lieu of branded medications with proved efficacy and safety?

Professors Piehl and Hillert argue that comparative effectiveness studies support use of rituximab as a MS disease modifying treatment (DMT), and that possible differences in association with malignancies found for ocrelizumab, but not associated with rituximab, make rituximab a better option


So what was said.
Prof Piehl says “Yes” or I guess Ja

Actually there are a few more, so safe ground to say that B cell depleting therapy is beneficial for controlling relapse.

The tack is to base the argument on medical arguments leaving the legal and cost issues aside. However, surely cost and the legal is the real battle ground as we know rituximab can work.

But for Prof Piehl the battle group is efficacy, immunogenicity and safety.


It is argued that the antibodies are not the same.

Yes we know about the price but what about the biology?

It is argued “The choice of RTX or OCR should be based on efficacy and safety issues. Although costlier than RTX, it can be argued that OCR is a more effective B cell–depleting agent with the potential for a greater likelihood of stabilizing MS activity in the right patient”.

It is argued by the No camp that that “Both mAbs differ in the mechanism for depleting B cells. OCR has a higher capacity for antibody-dependent cellular cytotoxicity and weaker complement-dependent cytotoxicity compared with RTX. OCR, thereby, provides a more direct path for eliminating B cells which could make OCR a more effective agent with less untoward effects on the immune system”.

Is this however true?


Because 98% of B cells do not live in the blood but in the bone marrow and the lymphoid tissues. So to kill there you have to get antibody and cells together verses antibody and complement which is a small molecule that will be easier to get in small spaces. It has been suggested that alemtuzumab kills in this way and this way does not appear to purge the bone marrow, based on results in transgenic mice and the suggestion that fingolimod stops alemtuzumab from working.

Now to the arguments


The yes camp made a case that rituximab works.

It stops the rebound associated with discontinuation of natalizumab.
It stops relapse, etc.

A case that one was better than the other was not really effectively made by the No camp.

Yes it did better in PPMS, but if you did a trial in PPMS knowing the result of the ocrelizumab trial would you be able to get the same result

3. Immunogenicity. Infusion reactions and upper respiratory infections are the most common untoward effects overall for both RTX and OCR.

The no camp says there is greater immunogenicity with rituximab, the yes-camp accept this and say it occurs in 25% of people.

“There was a significant association between presence and titers of ADA (Anti drug antibodies), and incomplete B-cell depletion, but not with infusion/adverse reactions or clinical outcomes at the group level.

“With regard to ocrelizumab, anti-drug-binding antibodies were found in 0.4% and 1.9% “

Yes we would expect that. This is a problem if you have to give rituximab forever, but do you have to do that?

Maybe not if it has induction therapy potential.

Is one safer than the other?

I think the case was not really made in the No-camp and the debater may have killed his cause talking about Breast cancer with ocrelizumab.

Is the breast cancer signal real? Should have been the question addressed.

If one is more effective, then it could be less safe as the mechanism for control autoimmunity and infection would be the same. You can’t have it both ways

“The development program for ocrelizumab in rheumatoid arthritis (RA) was been terminated and a negative safety signal for serious infections was evident”  and make the argument for cancer as an issue.


Prof Piehl has a few mentioned a few including links with Roche. However, there was no mention of a big grant from PCORI to test rituximab in MS…maybe not a financial conflict but in the case of the debate clearly an academic conflict as the surely Prof Piehl is passionate that they are doing the right thing.

Prof  Wallin one the other hand had no relevant conflicts suggesting that Pharma have not used his services in this area, and so the pharma side of the argument was not really made. So the debate is perhaps not coming from a place of passion. You need someone willing to give the pharma perspective, but most people would not want their neck to be put on the block.

However, there is more to the story that efficacy and safety and where did rituximab come from in the first place…yes pharma innovation….yep using academic knowledge.

Maybe we could do another debate

Yep we have this debate going on since 2012 within the lab, it is a relevant debate to be had. We should also have as you know where the holes in your argument lie.

However, you could you argue for

(a) Price of Innovation.

(b) Society benefits from a healthy pharma industry

(c) People with MS benefit from a healthy pharma industry

What stance would ProfG argue on

Whats more we could even do

Do on same websites and you find Skilarence.

This is a new 120mg tablet variant of DMF that was licenced in 2017(Allmiral a Spanish Company) for Psoriasis.

However, it costs $666 for 180, 120mg tablets, so about  eight times below the price of tecfidera milligramme for milligramme on the web site 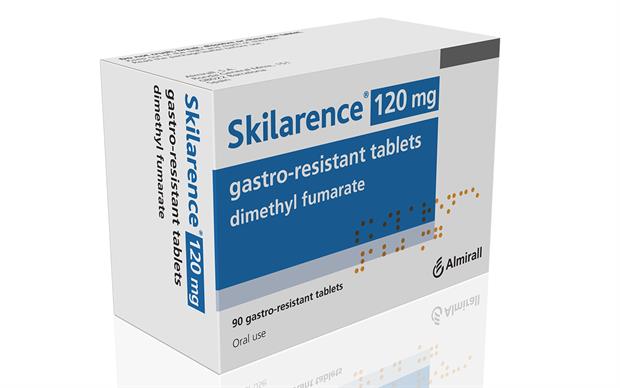 So it shows you that there is clear price gouging for MS drugs because here you have two licensed drugs doing the same thing and there is a massive price difference.

So why do companies do this?.

Because they can….and they (Pharma) know that people with MS will pay more for their drugs. It has nothing to do with the cost of manufacture.

But have you asked How much is it to do an MS trial and how much does it cost to do a psoriasis trial?

Is it eleven times more?