Every one is getting in on the B cell bandwagon.

There is review after review. Many give a lot of facts, but limited real insight. However, they contain some pretty pictures that may help you understand B cell development.
Sospedra M. B cells in multiple sclerosis. Curr Opin Neurol. 2018 Apr 7. doi: 10.1097/WCO.000000000000563. [Epub ahead of print] 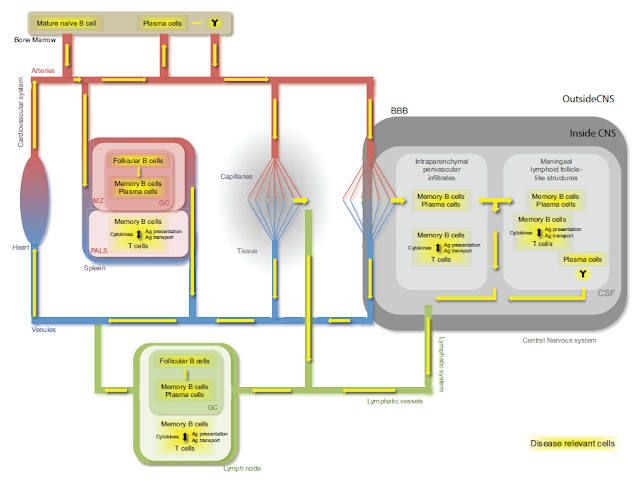 B cell-based therapies in CNS autoimmunity: differentiating CD19 and CD20 as therapeutic targets.
Forsthuber TG, Cimbora DM, Ratchford JN, Katz E, Stüve O.
Ther Adv Neurol Disord. 2018 Mar 21;11:1756286418761697.
Increasing recognition of the role of B cells in the adaptive immune response makes B cells an important therapeutic target in autoimmunity. Numerous current and developmental immunotherapies target B cells for elimination through recognition of cell-surface proteins expressed specifically on B cells, in particular CD19 and CD20. Similarities and differences in the function and expression of these two molecules predict some shared, and some distinct, pharmacological effects of agents targeting CD19 versus CD20, potentially leading to differences in the clinical safety and efficacy of such agents. Here, we review current knowledge of CD19 and CD20 function and biology, survey current and developmental therapies that target these molecules, and discuss potential differences in elimination of B cells by drugs that target CD19 versus CD20, with particular focus on the central nervous system autoimmune diseases multiple sclerosis and neuromyelitis optica.

However, there are still some diehards.

Kaskow BJ, Baecher-Allan C. Effector T Cells in Multiple Sclerosis. Cold Spring Harb Perspect Med. 2018 Apr 2;8(4). pii: a029025
Multiple sclerosis (MS) has long been considered a CD4 T-cell disease, primarily because of the findings that the strongest genetic risk for MS is the major histocompatibility complex (MHC) class II locus, and that T cells play a central role in directing the immune response. The importance that the T helper (Th)1 cytokine, interferon γ (IFN-γ), and the Th17 cytokine, interleukin (IL)-17, play in MS pathogenesis is indicated by recent clinical trial data by the enhanced presence of Th1/Th17 cells in central nervous system (CNS) tissue, cerebrospinal fluid (CSF), and blood, and by research on animal models of MS, such as experimental autoimmune encephalomyelitis (EAE). Although the majority of research on MS pathogenesis has centered on the role of effector CD4 T cells, accumulating data suggests that CD8 T cells may play a significant role in the human disease. In fact, in contrast to most animal models, the primary T cell found in the CNS in patients with MS, is the CD8 T cell. As patient-derived effector T cells are also resistant to mechanisms of dominant tolerance such as that induced by interaction with regulatory T cells (Tregs), their reduced response to regulation may also contribute to the unchecked effector T-cell activity in patients with MS. These concepts will be discussed below.

This sounds like a “What is EAE review?”, but they too stick the boot into [to criticize someone who is already in a difficult position]CD4 T cells position. Is it time for change?