In this study they looked at B cell subsets in people with the first demyelinating event, people who went on to be diagnosed with MS and MS had perturbations in their memory B cell pool and they conclude that there were suppressed memory cells. 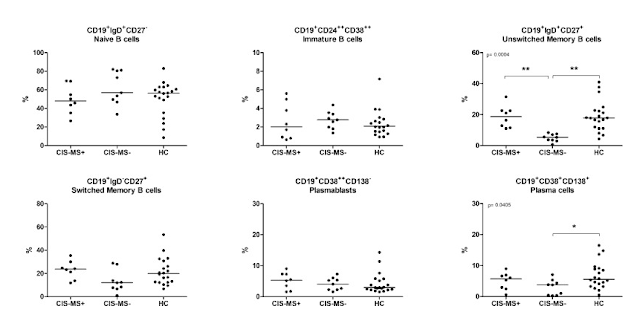 However, whilst again it suggests issues with the B cells, I am not sure what it says.


The data is based on percentages and not absolute numbers and so one goes down something must go up.


Memory cells are made producing Immunoglobulin D (unswitched), but when they have been activated they switch to make IgG (switched). You would think the important cell would be in the switched subset, but in this study the unswitched look like they change more.


We also know that the memory cell number can change with disease activity and drops in the blood during relapse, but in the study the people were in remission.


However, a big problem is that the people with MS were treated (fingolimod, beta interferon, glatiramer acetate). I think that the memory cell numbers drop in people following effective treatment so in the situation. So the comparison is untreated verses treated MS. In the CIS cohort the people without MS had fewer memory cells in blood than those with MS.


How would you interpret this?


I am going to sit on the fence. It seems that a few individuals change the interpretation e.g. if you look at the figure about and that there are less plasma cells than health controls, this is due to plasma cells in three individuals is this because they had a cold when their blood was sampled

BACKGROUND:Starting from the first attack, activated B cells are found in multiple sclerosis (MS) patients and are associated with disease activity.
METHODS: Peripheral blood cells of 17 clinically isolated syndrome (CIS) patients were collected during the first attack. CIS patients were divided as those converting to MS (CIS-MS+, n = 8) and not converting to MS (CIS-MS-, n = 9) in three years. Age-gender matched MS patients (n = 19) and healthy individuals (n = 20) were included as controls. Peripheral blood frequencies of total, immature, naive, unswitched and switched memory B cells, plasmablasts and plasma cells were measured by flow cytometry.
RESULTS: CIS patients showed reduced unswitched memory B cell and plasma cell frequencies. CIS-MS- patients had significantly increased levels of total B cells and suppressed unswitched memory B cell and plasma cell frequencies.
CONCLUSION: Our results suggest that conversion from CIS to MS occurs due to the inability of the immune system to suppress effector B cell production.