This post makes the case, yet again, for MS being one disease and that PPMS is no different to other types of MS. Do you agree? 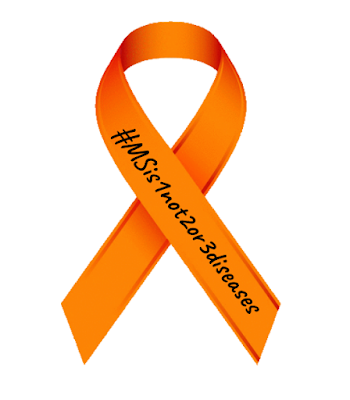 I have had the busiest week clinically for some time with four MS clinics in fours days. I typically only do 1.25 clinics per week (one every Tuesday and one on the first Thursday of the month). Why so little? I am only employed by the NHS for 20% of my time with 80% earmarked for research, teaching, management and other academic activities (grant and paper writing, manuscript and grant reviews, clinical trials, work for charities, Brain Health and MS in the 21st Century initiatives, blogging and social media activities, consulting, etc.).

The week was tough as I have had to deal with severe jet-lag from the AAN, but overall it was very enjoyable.

Several patients I saw had self-diagnosed themselves as having secondary progressive MS and asked me if I agreed with them. In comparison, several patients with more advanced MS, who were clearly getting worse, were in denial about the possibility of having entered the so-called progressive phase of the disease.

The issue I have is that since we published our therapeutic lag and asynchronous progressive MS hypotheses, under the length-dependent axonopathy theory of MS I am having increasing difficulty sticking to the old terminology that splits MS into two or three diseases. I think as a community the time is right to change the way the world thinks about the classification of MS. It is time to energise our campaign around #MSis1not2or3diseases. Do you agree?

People in the field of MS simply accept the dogma that PPMS in non-inflammatory form of MS and that PPMSers don’t have relapses and that PPMS is a different disease to relapse-onset MS.

Studies looking at the pathology of progressive MS show without doubt that PPMS is inflammatory, albeit at a slightly lower level than SPMS. Because we view MS through the spectacles of an MRI scanner people think PPMS is non-inflammatory; PPMSers have fewer new or gadolinium-enhancing lesions. This is wrong, PPMSers have both. In addition, focal inflammation may be occurring at a level below the detection level of the MRI. What an MRI sees in relation to focal lesions is simply the tip of the iceberg. This is why we are increasingly using spinal fluid neurofilament levels to monitor disease activity.

Please note almost all PPMSers have oligoclonal IgG in their CSF. If there were no inflammation surely you would expect PPMS to be OCBs negative. In addition in almost all PPMS trials done to date a proportion, albeit a small proportion, go onto have relapses. In the Rituximab PPMS trial (Olympus), 11 out of 439 (2.5%) of study subjects had a relapse during the 96 weeks of the trial. In the more recent Ocrelizumab (ORATORIO) study protocol-defined relapses were reported for 11% of subjects in the placebo group and 5% subjects in the ocrelizumab group. Similarly, about 5% of study subjects in the glatiramer acetate PPMS (PROMISE) trial had relapses. Unfortunately, the exact number of relapses is not reported in the main manuscript. What is reported is MRI activity; 14% of 938 study subjects had Gd-enhancing lesions on MRI during the study. The latter is the MRI equivalent of relapses.

In summary, PPMSers have relapses. Based on this data how can we say that PPMS is non-relapsing?

Some people still claim that PPMS is a different disease to SPMS. It not uncommon in siblings pairs with MS for one to have relapse-onset MS and the other to have PPMS. The figure from a UK sibling study is ~25%. This fact alone indicates to me that relapse onset and PPMS are the same disease. Other arguments in favour of PPMS and SPMS being the same disease relates to genetic and natural history studies. PPMSers and relapse-onset MSers have the same genetic background. Once people with relapse-onset MS enter the so-called clinical phase of SPMS they progress at exactly the same rate as PPMSers.

It is for these reasons that I am convinced MS is one disease and that there is a strong case for doing trials on combined populations of so-called advanced MS. In other words, we should combine PPMS and SPMS populations into one study. I am aware that this is a controversial topic, particularly in the eyes of the regulators, but it needs serious consideration. If we don’t do this then treatments will continue to be licensed for one subtype of progressive MS, and not the other clinical subtype, until additional trials are done. This is not in the interests of pwMS. Additional trials cost money and time. Time is not a something that progressive MSers have on their side. Five years in the life of someone with advanced MS may be the difference between using a walking-stick and becoming bed-bound.

Another issue is the concept that still pervades the field is that once you have progressive MS it is untreatable. One patient said to me: ‘but, SPMS is an untreatable disease’. These attitudes entrench the concept of the therapeutic window in MS and perpetuate the concept that it is futile to treat SPMS. I disagree with both of these positions and prepared to go out on a limb and state that the therapeutic window remains open throughout the course of MS and it is not futile to try an develop treatments for SPMS. We have to give people with MS hope. Both the ASCEND (natalizumab) and EXPAND (siponimod) Trials were clearly positive in SPMS. Although the natalizumab (ASCEND) study did not hit the desired primary outcome natalizumab did show a strong treatment effect on hand and arm function. Surely a treatment that protects upper limb function in people with SPMS is worth the effort? These observations underpin our #ThinkHand campaign and why we want to do our #ChariotMS study. To quote one of my patients with SPMS: ‘Now that I am in a wheelchair my hands and arms have become my legs’.

Do I also need to remind you that the ORATORIO trial of ocrelizumab in PPMS was also positive? Is ocrelizumab really superior to natalizumab? I would argue no. The differences between the ASCEND and ORATORIO trials can be explained on differences in the study populations. The ASCEND SPMS population was older and more disabled; over 60% of study subjects had an EDSS of 6.0 or 6.5. In other words, they had lost most meaningful reserve capacity in the motor system to their legs.

We know from other studies done on subjects with a disability level of EDSS of 6.0 (unilateral support) or 6.5 (bilateral support) that the EDSS is not a very good outcome measure over 2 years. Most MSers with this level of disability spend many years at these levels before progressing to a higher level of disability. In measurement speak, we refer to this as the ceiling effect of the EDSS. In comparison over 60% of PPMSers in the ORATORIO study had an EDSS of less than 6.0 and hence were at a level of disability on the EDSS scale that is more likely to move. In addition, with a disability below EDSS 6.0 there is more reserve capacity in the motor system to allow recovery of function and get a read-out in a two year period. In other words at lower levels of disability, there is less therapeutic lag.

For the last 4-5 years, I have been discussing two concepts, or hypotheses, on this blog, i.e. therapeutic lag and the length-dependency. The results of these two studies, with other evidence – new and old – strongly support both these related hypotheses. Therapeutic lag states that the more reserve that is lost in a specific pathway the longer it will take to see a treatment effect in relation to therapies that are targeting MS specific mechanisms. This is why the ORATORIO trial was positive on both the EDSS and timed-25-foot walk (T25FW), and the ASCEND trial was negative on both these outcome measures. I predicted correctly that if the ASCEND trial had been longer in duration then it would have been positive on both of these outcomes, in particular, the T25FW which is more sensitive to change than the EDSS. Unfortunately, the ASCEND trial did not allow for therapeutic lag, which is why I keep badgering Biogen to do an ASCEND-plus trial; i.e. to redo the ASCEND trial and include MSers in wheelchairs and to design the study with the 9-HPT being the primary outcome measure. This is what we are doing with ocrelizumab in PPMS; Roche will hopefully be in a position to announce the ORATORIO-plus trial based on these exact principles. I am convinced these hypotheses are correct as the treatment effect of ocrelizumab was greater on upper limb function, as assessed using the 9-hole peg test, than on lower limb function (EDSS & T25FW) in the ORATORIO PPMS study.

So what have we learnt?

The cynic in me worries more about the payers than the regulators. The cost-effectiveness calculations in relation to DMTs are based on the cost of the treatment versus the savings to the individual and society. Once a person with MS has lost their mobility they have already accrued a large amount of personal and societal costs. These include both direct medical cost and indirect costs for example loss of employment. The sad thing once a person becomes unemployed their worth to society drops. If this is the case then the payers, for example, NICE, may judge the cost-effectiveness of DMTs in more advanced MS to be less favourable; in other words expensive high-cost drugs such as natalizumab and ocrelizumab may not be cost-effective in more advanced MS compared to say early MS when preservation of physical functioning and employment will save society more money.

This is one reason why Pharma are reluctant to take on the risk and develop drugs for more advanced progressive MS, i.e. for MSers in wheelchairs. A potential way to counter this is to allow Pharma and payers to agree to a differential payment scale; the more disabled a person with MS is the less the company is able to charge for their drug. This may sound counterintuitive but it makes a lot of sense; it would force pharma to move to an outcomes-based remuneration system. Under this system, payers will get better value for money and pwMS will get treatments that work. This will allow us to move away from a fixed-pricing system to a value-based pricing system. We seem to be getting used this in many other sectors, surge pricing systems are used by the airlines, software industry and Uber.

I can see a world where the same DMT is more expensive when used in early MS and as the patient becomes more disabled the price of the drug drops. The question is the NHS and the Pharmaceutical sector ready for valued-based pricing? I think so this is already being explored in oncology. Why should the NHS, or individual, pay for something that doesn’t work? On the other hand, why should we deny people with progressive MS drug X because it is considered not cost-effective at their stage of the disease?