This study examined body fatness and its association with cardiorespiratory fitness (CRF) in persons with multiple sclerosis (pwMS) accounting for disability status.

This study involved a secondary data analysis from a previous study of 62 pwMS. Body fatness was indirect measured as body mass index (BMI), and CRF was measured as peak oxygen consumption from an incremental exercise test with spirometry. Participants were allocated into 3 different groups based on established BMI categories (ie, normal, overweight, and obese), and data were analyzed using SPSS.

The findings suggest that BMI has a negative impact on CRF in pwMS, with a marked reduction in CRF for those classified as obese compared to those in the normal and overweight category.

Alas, our battles over the way we look and our weight, in particular, has become part the parcel of modern day living. Kierkegaard, in his infamous writings ‘Either/Or’ once said “Life has become a bitter drink to me, and yet it must be taken in drops, counted one by one“. In this context, a healthy lifestyle seems almost superfluous, but maybe I’m the one missing the point…


Body mass index (BMI), which is an indirect measure of body fat has been linked to increased risk of MS and other medical conditions, and disability progression. However, the link between BMI and cardiovascular fitness may be the avenue whereby these secondary consequences occur. Sebastio et al. discuss in this article that PwMS undergo physiological deconditioning, particularly in cardiovascular fitness as a function of their disability progression. But, it’s not known the relevance of BMI in all of this.


They invited 129 PwMS to participate, of whom 62 were included. Peak oxygen consumption was used as a measure of cardiovascular fitness. Participants were asked to exercise on a recumbent stepper at a rate of 15 watts, then continuously increased at a rate of 5-10 watts/min until fatigue was reached. Peak oxygen saturation was based on the peak recorded 20-second oxygen consumption value when at least one of these criteria were met: 1) respiratory exchange ratio was >/=1.10, 2) peak heart rate within 10 beats per minute of age predicted maximum, or 3) peak rate of perceived exertion was >/=17.


Their findings can be viewed in this scatter plot below. And as you can see BMI negatively associated with cardiovascular fitness. This was even after controlling for age, gender, disease duration, and disability level. Over 50% of the participants in this study were either overweight or obese (BMI 25-40). Moreover, obese participants were more likely to have to have 3/more co-morbidities and 40% more likely to be in the moderate/severe disability category. Equally, those with high physical activity were statistically marginally more likely to have a decrease in co-morbidity (P=0.054). I routinely refer those who are obese under my care to a general surgeon, where traditional weight loss strategies have failed, for consideration of gastric procedures. 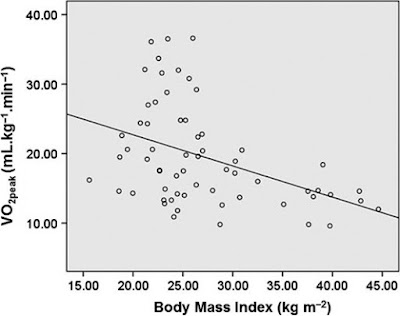 Figure: Scatter plot of the association between VO2peak and body mass index in persons with multiple sclerosis