It was recently reported that, using Western blotting, some multiple sclerosis (MS) patients in the United States had antibodies against epsilon toxin (Etx) from Clostridium perfringens, suggesting that the toxin may play a role in the disease.

We investigated for serum antibodies against Etx in UK patients with clinically definite multiple sclerosis (CDMS) or presenting with clinically isolated syndrome (CIS) or optic neuritis (ON) and in age- and gender-matched controls.

We tested sera from CDMS, CIS or ON patients or controls by Western blotting. We also tested CDMS sera for reactivity with linear overlapping peptides spanning the amino acid sequence (Pepscan) of Etx.

Using Western blotting, 24% of sera in the combined CDMS, CIS and ON groups ( n = 125) reacted with Etx. In the control group ( n = 125), 10% of the samples reacted. Using Pepscan, 33% of sera tested reacted with at least one peptide, whereas in the control group only 16% of sera reacted. Out of 61 samples, 21 (43%) were positive to one or other testing methodology. Three samples were positive by Western blotting and Pepscan.

Our results broadly support the previous findings and the role of Etx in the aetiology of MS warrants further investigation. 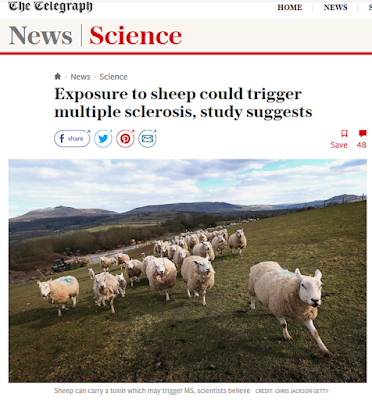 Believe it or not it is illegal in England & Wales to worry sheep – although this generally applies to dogs, and in certain cases to rambling tourists…But are sheep worrying for us humans? According to Wagley and colleagues, getting too close to our fury friends may not be a good idea as it first seems.

Clostridium perfringens epsilon toxin is a spore-forming toxin that triggers fatal enterotoxaemia in sheep and goats. It is normally present in the soil and healthy gut of these animals, but under certain conditions may rapidly multiply resulting in large quantities of the toxin. The toxin builds up in the kidneys and the brain where it can damage neuronal structures, including oligodendrocytes (myelin forming cells).

It is not certain what the significant finding here is; the antibody to the toxin in MS or the initial exposure to the toxin. The Telegraph coverage (above) points out that sheep farming is more common in the northern altitudes, as is MS. This may be a leap too far, but the signal warrants more in-depth investigation.

CoI: Prof G, Dr Turner, Dr Raciborska and myself were involved in this work.