Are you into HIIT?

Aerobic high intensity interval training (HIIT) is safe in the general population and more efficient in improving fitness than continuous moderate intensity training. The body of literature examining HIIT in multiple sclerosis (MS) is expanding but to date a systematic review has not been conducted. The aim of this review was to investigate the efficacy and safety of HIIT in people with MS.

A systematic search was carried out in September 2017 in EMBASE, MEDline, PEDro, CENTRAL and Web of Science Core collections using appropriate keywords and MeSH descriptors. Reference lists of relevant articles were also searched. Articles were eligible for inclusion if they were published in English, used HIIT, and included participants with MS. Quality was assessed using the PEDro scale. The following data were extracted using a standardised form: study design and characteristics, outcome measures, significant results, drop-outs, and adverse events.

Seven studies (described by 11 articles) were identified: four randomised controlled trials, one randomised cross-over trial and two cohort studies. PEDro scores ranged from 3 to 8. Included participants (n = 249) were predominantly mildly disabled; one study included only people with progressive MS. Six studies used cycle ergometry and one used arm ergometry to deliver HIIT. One study reported six adverse events, four which could be attributed to the intervention. The other six reported that there were no adverse events. Six studies reported improvements in at least one outcome measure, however there were 60 different outcome measures in the seven studies. The most commonly measured domain was fitness, which improved in five of the six studies measuring aspects of fitness. The only trial not to report positive results included people with progressive and a more severe level of disability (Extended Disability Status Scale 6.0-8.0). 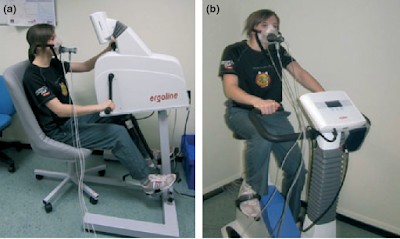 I’ve been looking into different types of exercise since starting my training for the Three Peaks Challenge. On balance, all forms of exercise appear to be beneficial for cardiovascular fitness. From a personal perspective, my Asian genetic background makes me a sitting duck for heart disease; so prevention is on my list of priorities. Recently, a new type of physical fitness has entered into the exercise world – that of HIIT (High Intensity Interval Training) work outs. In MS, where fatigue is a major problem HIIT may have a role to play. It allows PwMS to exercise at higher intensities, whilst avoiding the thermosensitive responses (Uhthoff’s phenomenon).

So what is HIIT?

It is short bursts of high intensity exercise. They typically last 20min of 4-6 cycles of 80-95% maximal effort lasting 1-4min working in rests between the bursts. Compared to continuous moderate intensity training, HIIT is better at improving VO2 max (the maximum amount of oxygen that a person can use during high intensity workouts).

In this article, Campbell et al. review the efficacy of HIIT in MS. They performed a search in various publication database of all articles that referenced HIIT from 2017 onwards. There were 11 articles of acceptable quality, four of which were randomized control trials. In majority a cycle ergometer was used (an alternative to the treadmill in those who are unable to weight bear).

All baring one study revealed improvements in either peak VO2 or VO2 max in MS. There was also improvements in peak power after exercise or following a couple of sessions – this is felt to be due to positive outcome on muscle contractile characteristics. In terms of adverse events, only one study reported knee or leg pain whilst cycling, but overall it was felt to be safe and an effective way of improving fitness in MS.

So what’s stopping you?