Do you believe in the number 17? A lot of MS immunologists do.

Changes in Th17 cells function after nanocurcumin use to treat multiple sclerosis.

MS is a chronic inflammatory disease that causes to brain inflammation and Th17 cells are considered to be important in multiple sclerosis pathogenesis. In the current study, we aimed to identify nanocurcumin effects on Th17 cells frequency, cytokines secretion, and expression of transcription factor of patients with relapsing-remitting multiple sclerosis (RRMS).

In this study we investigated frequency of Th17 lymphocytes; the expression of transcription factor, associated cytokines and the concentration of them in 35 healthy controls, and from 25 patients at baseline and after 6 months of nanocurcumin treatment and also from 25 patients whose received placebo by flowcytometry, real-time PCR and ELISA, respectively.

Our analysis revealed that the proportions of Th17 were increased dramatically, along with increases in the levels of IL-17A, IL-23, and RORγt expression in MS patients in compared with healthy control group. Post-treatment evaluation of the nanocurcumin group revealed a significant decrease in Th17 associated parameters such as Th17 frequency (p = 0.029), expression levels of RORγt (p < 0.0001) and IL-17 (p = 0.0044) and also secretion level of IL-17 (p = 0.0011), but IL-23 mRNA expression levels and IL-23 concentration were not influenced by nanocurcumin. However, in the placebo group there is no significant changes in these factors.

Our study suggests that the increase in proportion of Th17 cells might contribute to the pathogenesis of RRMS. The results of the current work indicated that nanocurcumin is able to restore the dysregulated of Th17 cells in MS patients. Generally speaking, I steer clear of all ‘ooh la frou frou’ concepts. There is a certain cognitive dissonance when faced with scientific data on a backdrop of fluff. Theories on diet and neutraceuticlas generally provoke this response in me, which is a shame…But, then some people are born to hand out complaints, while others are born to collect them!!!

Nanocurcumin is similar to native curcumin (turmeric), but has better bioavailability and in vivo stability. Back home, turmeric exists as a principle ingredient in ayurvedic medicine. Western science has subsequently proven that turmeric has great many anti-inflammatory, anti-oxidant properties and maybe useful in the treatment of cancers.

So what about in MS?

Dolati et al. in this article examine the effect of nanocurcumin on Th17 (T helper 17, a sub-type of lymphocytes) cells and their related inflammatory effects (cytokines) in PwMS. It is believed that Th17 cells are exclusively pro-inflammatory and although useful in fighting infections, can also lead to autoimmunity and more active disease in MS.

Participants in the study had RRMS and were on weekly interferon injections. On top of this they also received either nanocurcumin or placebo for 6 months, and there was also a group who didn’t have MS.

Interestingly, the disability (as measured by EDSS) also reduced in the nanocurcumin arm compared with before treatment and the placebo arm – this change was subtle, but statistically significant. Obviously, this needs confirmation and some imaging data looking at the anti-inflammatory effect of nanocurcumin on lesions and whether the primary effect on EDSS improvement is driven via this pathway, needs to be looked at.

Last but not least, there is also ex vivo and in vivo evidence that administration of curcumin ameliorates EAE (the mouse model of MS): http://multiple-sclerosis-research.blogspot.com/2012/03/research-turmeric-and-treatment.html. 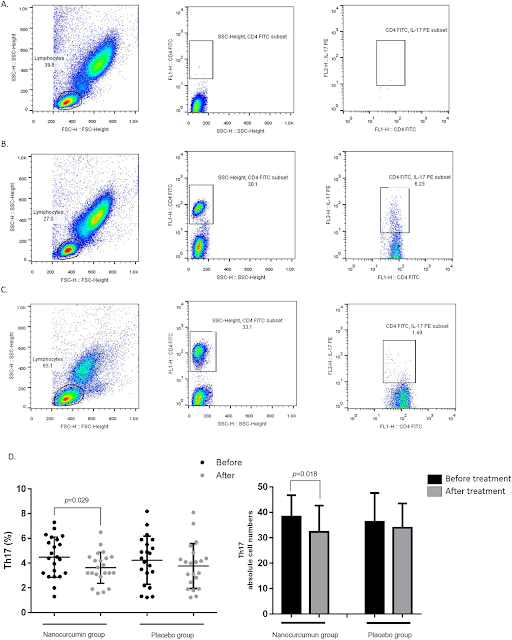 Figure 1: The frequency of Th17 cells in nanocurcumin treated and placebo treated RRMS. (A) The isotype control for the flow cytometric strategy of CD4+IL-17+ cells,(B) representative image of a sample with high levels of IL-17+CD4+ T cells (C) other samples with a reduced frequency is shown. (D) Representative dot plots demonstrating the analyzing method used for enumeration of Th17 is shown. There was a noticeable decrease in the frequency of Th17 cells (p value = 0.029). The absolute numbers of Th17 cells were significantly lower in MS patients treated with nanocurcumin in compare with the basal level (before treatment) (p value = 0.018). There is no significant difference in absolute numbers of Th17 cells in placebo group compared with basal level (nanocurcumin group n = 20, placebo group n = 21).