Why is DMF so poorly tolerated?

Dimethyl fumarate (DMF) has been registered for the treatment of relapsing-remitting multiple sclerosis (RRMS). Differences in tolerability between multiple sclerosis clinics in patients treated with DMF has not been examined.
AIM:

253 patients participated in this retrospective study. In the total cohort, 27.7% of the patients discontinued DMF. Higher rate of discontinuation was associated with higher number of previous disease modifying treatments (p < 0.001). Reasons for discontinuation were primarily flushing (15%) and gastrointestinal AEs (51%). Grade III lymphopenia was detected only in 6 cases (2.4%). We observed differences between the two clinics: discontinuation because of AEs was different (Odds ratio 6.13, 95% CI: 3.0-12.7, p < 0.001), the mean treatment duration also differed (305.3 ± 186.3 vs 140.5 ± 114.4 days, p < 0.001), and dissimilarities in adherence were mainly related to flushing, gastrointestinal AEs, and consideration of lymphopenia (p < 0.0001). Better adherence was associated with prospectively planned management of gastrointestinal AEs and flushing. 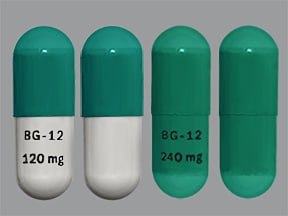 Another successful year for Biogen, not least because of SPINRAZA (nusinersen, an antisense oligonucleotide) in spinal muscular atrophy (SMA). But in MS, they won a patent dispute on Tecfidera filed by Kyle Bass a hedge fund manager last year, banking a revenue of $987 million this quarter alone. All said and done, for PwMS and their clinicians the most important thing is safety and tolerability. Judging across the board, however, compared to other oral therapies, some of Tecfidera’s side effects, such as the gastrointestinal symptoms and lymphopaenia, may limit its usage and adherence to therapy.

They report in total 80% of 253 PwMS experienced side effects, whilst ~28% discontinued therapy. By comparison, less than a quarter discontinued therapy because of treatment failure (i.e. secondary to a clinical relapse). So side effects are a real problem with Tecfidera. The majority of side effects were gastro-intestinal, although skin flushing was also problematic. Low lymphocyte counts (lymphopaenia), both transient and persistent ones were also noted, with grade I/II lymphopaenia (<0.8 × 10−9 cells/L) affecting less than a quarter of PwMS. But, discontinuation of therapy because of this was low.

Not surprisingly, those who have discontinued previous therapies were also more likely to discontinue on Tecfidera also (constant switching of therapies gives rise to poor MS prognosis in the long-run based on MS database reviews).