There are a number of initiatives from the multiple sclerosis societies aiming to hunt and test for treatments for progressive MS.

People are screening public data bases to see if they can get ideas for candidates to test.

We will soon have the results of one of these approaches with the delivery of results from the United Kingdom MS-SMART study. This has tested the influence of fluoxitine (sertonin-reuptake inhibitor), riluzole (a glutamate receptor and ion channel blocker) and amiloride (an acid sensing ion channel blocker) in secondary progressive MS.

Fluoxetine was next on the list after Ibudilast but that was tested in the MS-SPRINT trial undertaken in the United States, which has also finished.

However, the MS Societies have not finished and they want to test more.

(a) An optimum trial design to test the agents and
(b) the agents.

The pharma approach is to innovate or to innovate to re-engineer existing targets to get a patent and then test.

The academic approach is to repurpose existing generic drugs.

Academia has found candidates should we give them a go?

Clomipramine is a tricyclic antidepressant (TCA) 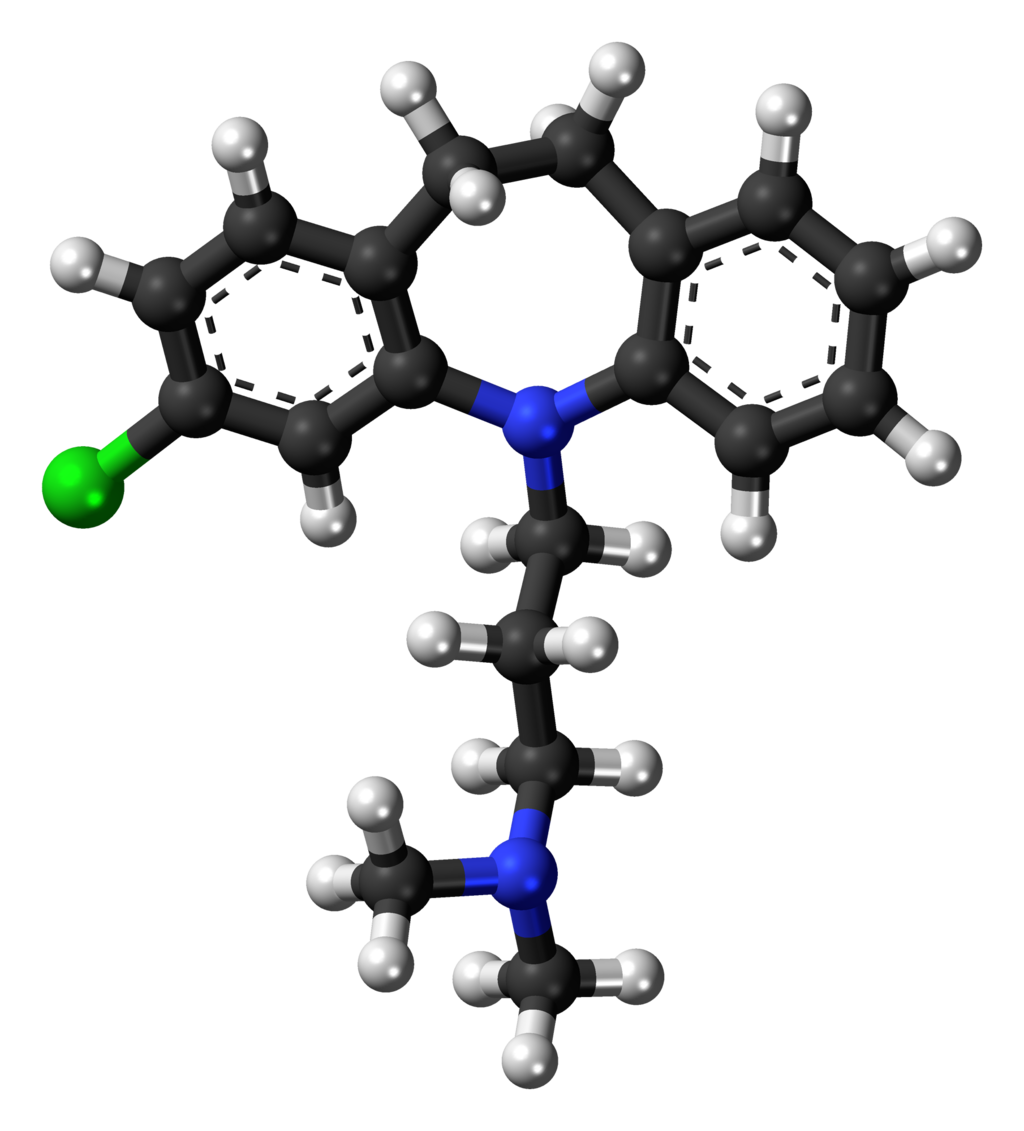 I think you can see why it is called a tri cyclic as you can see the three ring structure.

Clomipramine is a reuptake inhibitor of serotonin and noadrenaline/norepinephrine, or a serotonin–norepinephrine reuptake inhibitor (SNRI); that is, it blocks the reuptake of these neurotransmitters back into neurons by preventing them from interacting with their transporters, thereby increasing their extracellular concentrations in the synaptic cleft and resulting in increased serotonergic and noradrenergic neurotransmission.

In addition, clomipramine also has anti-adrenergic, anti-histamine, anti-serotonergic, anti-dopaminergic, and ant-icholinergic activities. It is specifically an antagonist of the α1-adrenergic receptor, the histamine H1 receptor, the serotonin 5-HT2A, 5-HT2C, 5-HT3, 5-HT6, and 5-HT7 receptors, the dopamine D1, D2, and D3 receptors, and the muscarinic acetylcholine receptors (M1–M5). Like other TCAs, clomipramine weakly blocks voltage-dependent sodium channels as well.

Therefore there are, not surprisingly, side effects.

Common side effects include dry mouth, constipation, loss of appetite, sleepiness, weight gain, sexual dysfunction, and trouble urinating. Serious side effects include an increased risk of suicidal behavior in those under the age of 25, seizures, mania, and liver problems. If stopped suddenly a withdrawal syndrome may occur with headaches, sweating, and dizziness.

he treatment of progressive multiple sclerosis (MS) is unsatisfactory. One reason is that the drivers of disease, which include iron-mediated neurotoxicity, lymphocyte activity, and oxidative stress, are not simultaneously targeted. Here we present a systematic screen to identify generic, orally available medications that target features of progressive MS. Of 249 medications that cross the blood-brain barrier, 35 prevent iron-mediated neurotoxicity in culture. Of these, several antipsychotics and antidepressants strongly reduce T-cell proliferation and oxidative stress. We focus on the antidepressant clomipramine and found that it additionally inhibits B-lymphocyte activity. In mice with experimental autoimmune encephalomyelitis, a model of MS, clomipramine ameliorates clinical signs of acute and chronic phases. Histologically, clomipramine reduces inflammation and microglial activation, and preserves axonal integrity. In summary, we present a systematic approach to identify generic medications for progressive multiple sclerosis with the potential to advance rapidly into clinical trials, and we highlight clomipramine for further development.

This study starts with a premise that there is mitochondrial damage, iron accumulation and oxidative stress at the centre of progressive MS. They think B cell follicles may be important and of course the premise that MS is essentially a T cell problem and recognise that  there is microglial activation.

In addition they view it essential that the compounds can enter the brain to target the site of tissue damage.

This study looks at the Drug collection from the National Institute of Health of FDA approved (mainly generic) drugs.

Out of 1040 compounds, 123 reduced cytokine production by activated microglia.

Out of the 1040 compounds they threw out compounds that that could not be given as a pill. This excluded 791 compounds

In this study they looked at compounds that affect iron-mediated nerve killing, maintain mitochondrial integrity and scavenge free radicals (which are damaging oxygen species like superoxide and hydrogen peroxide) as well as T & B inhibitors Then asked do the compounds affect EAE.

These included drugs such as liothyronine (a thyroid hormone), flunarizine ( a calcium ion channel, carvediol (beta blocker), clozapine (serotonin receptor blocker and other receptors) and a number of tricyclic antidepressants. Liothronine, carvediol were chucked out because they do not enter the brain.

They then looked at influences on inhibiting mitochondrial damage and then in my opinion for some strange reason they looked at the capacity of T cell inhibition and the tricyclics tested at 10 micromolar inhibited T cell proliferation.

So drugs like flunarizine had no effect and so would get a look-in.

Therefore, the tricyclics were studied.

If a drug inhibits T cells then we know they will inhibit EAE, which we know is T cell dependent.

They did two models and they both work. So now we have a prime candidate for a trial.

Will it happen? Maybe.

However has the best candidates been thrown away?

This was a systematic approach,  but as the authors point out there are limitations

1. They focused on three features of progressive MS which included immune cell proliferation.
We know EAE is T cell mediated and when tested at a dose over ten times the human dose there was some inhibition of EAE. It was about 3-4 times times the human dose based on blood levels, although it was argued they are similar. Maybe a dose-response would have shown us what dose mediates a positive effect.

HSCT is the ultimate example and it is evident that once started progression will continue (I am not say it has no effect), because the processes that are driving this response are not dependent on T cells. There is no mention of the clinical reality.

2. They selected one fixed dose to do the screening. The dreaded 10 micromolar. For many compounds that are highly fat soluble (which is often the case for CNS penetrating drugs) this is the dose just before cells turn up their toes and die and many drugs do stuff at this dose and nothing much useful at clinically relevent doses.  Don’t believe me..read the cannabinoid literature…it is full of such nonsense.

In this study they used 10 micromolar  (3150ng/mL) and got 100% protection against iron toxicity.

Now if we look at the steady state blood levels of a standard dose and the mean is around 150ng/ml This is therefore about 0.5 micromolar. However, they did a dose response and found some activity as human plasma levels. In the mice clomipramine accumulated in the brain to over twenty times the level in the blood.

Importantly clomipramine is rapidly broken down to demethyl-clomipramine, which is pharmacologically active and participates in both therapeutic and unwanted effects. So this should have been tested to look for the drug effects.

The clinical reality is largely ignored.

Surely drugs should not be tested above doses that are likely to occur in humans, otherwise we are likely to get false positives.

Secondly identifying the key mediators of progressive MS is key for any drug screening. People have their favourites, however, I personally do not think that T cell proliferation activity is something we should be bothering with.

I think T cells have to proliferate and expand in number to create immunity but once effector cells are formed, do they need to proliferate to be active in the brain?

Can they simply secrete cytokines and other factors to do their job and then die, After all we can make new ones from memory cells in the lymphoid tissue.


Do EAEers have T cell-coloured glasses on. I think so.

The only problem here is if B cells are the important cell type how do we build this data into a reality?