Oligoclonal bands (OB) are a characteristic hallmark of MS.


They occur from disease onset. But what are they doing?


Despite much wishful thinking by researchers that OB are producing the pathogenic antibody (which they may well do) it has to be said that people have looked and looked, but no consistent antibody has yet been found in MS.


However, do the antibodies in the OB have to be specific for a target in MS?


MD2 suggests not, but they may play a role in progressive damage. 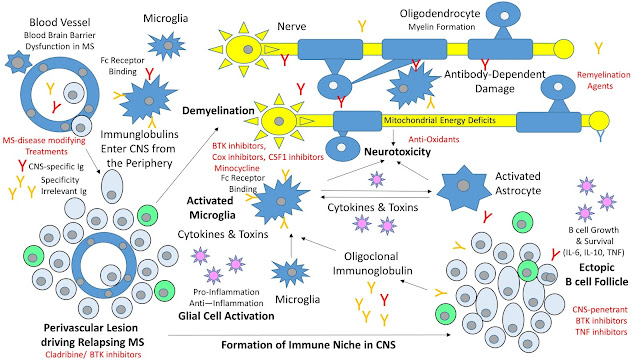 Read the paper free of charge (for the next 50 days)

Since their discovery, the existence of secreted oligoclonal immunoglobulin in the central nervous system in people with multiple sclerosis has been the subject of scientific investigation and debate over several decades. Although autoantibodies can be detected in some individuals, probably secondary to release of neo-antigens after damage, evidence for a major, primary involvement of damaging antibodies is still relatively lacking. However it is possible to construct a working hypothesis that establishes the interaction of plasma cells, which are the source of oligoclonal bands, microglia and astrocytes to create a self-perpetuating activated phenotype. This may generate an environment conducive to long-term plasma cell survival and the initiation and perpetuation of neurotoxicity that may contribute to disease worsening in multiple sclerosis. Therapeutic strategies to re-establish a homeostatic environment conducive to repair/recovery are indicated to control progressive multiple sclerosis.

Antibodies in the CNS tend to be targeting things within the cells (intracellular targets). This suggests that the antibodies are occurring after damage and the liberation of cellular proteins rather than being the primary problem themselves.


We know that antibodies in the CNS of people with MS are pathogenic (causing disease) just as some in the blood are potentially pathogenic if they can get in the brain.


We know this because some people respond to plasmapheresis (the removal, treatment, & return or exchange of blood plasma) and immunoadsorption (where immunoglobulins in the blood are removed). This indicates that the problem is caused by the antibodies in the periphery.


Likewise we can take the peripheral antibodies, and the antibodies in the CNS, and inject them into animals. There, they can cause neurological problems or augment the damage driven by T cells.


However, this is not a problem for all.


Maybe one thing that OB do is to juice-up microglia (which are believed to the central problem of progressive MS) and keep them in an activated state, such that damage caused by the immune response is perpetuated into a slow-burning neurodegeneration.


Antibodies simply bind to receptors on the microglia to activate them, and their specificity may well be irrelevant.


If this is true, targeting the plasma cell response within the CNS may be the linchpin to control progression by the glial responses and metabolic problems.


Bruton’s tyrosine kinase (BTK) inhibitors can block plasma cell function, but they also inhibit microglial/macrophage function.  A number of companies have these drugs.


Other treatments may be proteosome inhibitors, which have also been used to target B cell lymphomas/myelomas (plasma cell cancers) in the brain and will be tested in MS soon.