Although it is not always done, spinal cord imaging may help to see what is in store for your leg function.

Cross-sectional studies have shown that spinal cord volume (SCV) loss is related to disease severity in multiple sclerosis (MS). However, long-term data are lacking. Our aim was to evaluate SCV loss as a biomarker of disease progression in comparison to other MRI measurements in a large cohort of patients with relapse-onset MS with 6-year follow-up.

Patients with SPMS had lower baseline SCV (p < 0.01) but no accelerated SCV loss compared to those with RRMS.


Clinical relapses were found to predict SCV loss over time (p < 0.05) in RRMS.


Relapses are not good for your nerves…don’t have them


If you are having them on treatment…time to talk to your neurologist and think about changing to something more active.


Furthermore, SCV loss, but not total brain volume and T2 lesion volume, was a strong predictor of EDSS score worsening over time (p < 0.05).


Loss of nerves in the spinal cord is a prediction of whether you will lose leg function. This is not surprising as the spinal cord is the nervous highway from your brain to your legs; you go slower if more lanes are closed on that highway.


The mean annual rate of SCV loss was the strongest MRI predictor for the mean annual EDSS score change of both RRMS and SPMS separately, while correlating stronger in SPMS.


If you are losing nerves, your cord may shrink, but remember that you can still be losing nerves when your spine doesn’t shrink because the space is being filled by glial and fluid. The faster it shrinks the more likely you are to lose lower limb function and this is better predicted in progressive MS. This may because it is not confounded by swelling due to inflammation which is more common in relapsing MS.

Every 1% increase of the annual SCV loss rate was associated with an extra 28% risk increase of disease progression in the following year in both groups.


The more the spinal cord shrinks the greater the chance of progression.


CONCLUSION:
SCV loss over time relates to the number of clinical relapses in RRMS, but overall does not differ between RRMS and SPMS. SCV proved to be a strong predictor of physical disability and disease progression, indicating that SCV may be a suitable marker for monitoring disease activity and severity.
Some people argue that relapses are not important to disease worsening. However this report says otherwise.

You ask which bit of the body is affected due to spinal cord and brain lesions.

A dermatome is an area of skin supplied by sensory neurons that arise from a spinal nerve ganglion. Symptoms that follow a dermatome (e.g. like pain or a rash) may indicate a pathology that involves the related nerve root. Referred pain usually involves a specific, “referred” location so is not associated with a dermatome. 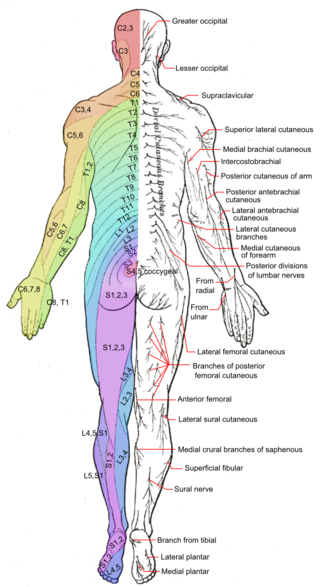 Then there is the brain which has regions decicated to sensation  and movement and lesions in these areas will affect movement and cognition.