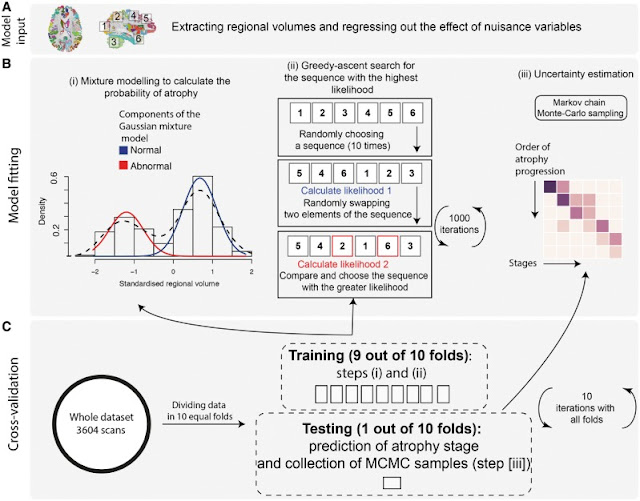 Figure: The event-based model steps to estimate the most likely sequence of atrophy progression. The three steps are: (A) adjusting for nuisance variables, and region selection; (B) calculating the best-fit probability distributions for normal and atrophic brain regions; searching for the most likely sequence; and (C) quantifying the uncertainty with cross-validation. [B(i)] The distribution of the volume in an example region in healthy controls and patients and the corresponding mixture model. (ii) The steps for greedy ascent search. (iii) A matrix showing a sequence of atrophy progression on the y-axis, and the position in the sequence of each region ranging from 1 to the total number of regions on the x-axis. The intensity of each matrix entry corresponds to the proportion of Markov Chain Monte Carlo samples of the posterior distribution where a certain region of y-axis appears at the respective stage of x-axis.

Years of research into MS hasn’t solved the mystery that is progressive disease in MS, it would seem that there’s always more mystery. Like pieces of an incomplete puzzle, the face of true MS remains hidden. Is it one disease entity? Or is it like people, you only see the facets that you understand?

Our therapeutic strategy for MS unfortunately has been hampered by our lack of understanding of this process. The slow burn neurodegeneration leading to brain volume loss is such a subtle process. and clinically at its earliest stages an undefinable milieu of cognitive and psychiatric dysfunctions, that we have yet to define where MS starts or even the MS prodrome.


Looking at large data sets and developing new methods of analysing data within this might me the answer.

Here researchers use a strategy called event-based modelling in longitudinal data sets (serial MRI imaging) to stage the progression of grey matter (where the neuronal cells in the brain sit, as opposed to the the white matter, which comprises of the tracts or axons) volume loss in all forms of MS (see figure above). Of course, in this type of strategy, a couple of a priori assumptions have to be made: a) that the information derived from these images is representative of the entire disease trajectory, b) that it occurs the same way in everyone, and c) that it is irreversible! Although, by no means perfect it’s an interesting strategy to deploy in understanding the progression patterns of neurodegeneration in MS.


There were some notable findings from the study:

What is notable is that the regions initially affected happen to be relay hubs for the brain, and just may be more vulnerable to damage because of their greater metabolic load than other areas of brain.

So is the MS prodrome simply one of disconnection?