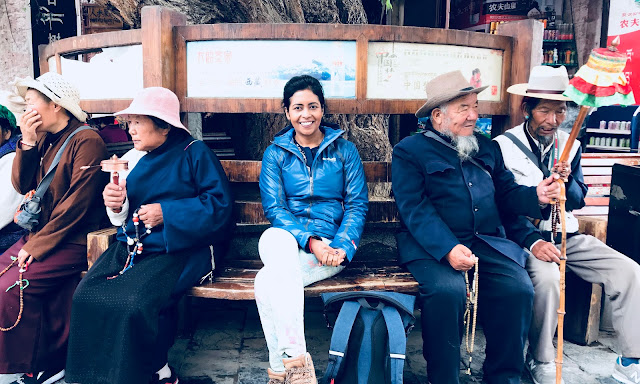 “Mountain climbing as an obsession is a selfish endeavor,
and there’s just no way to get around that fact”

-Beck
Weathers in ‘Left for Dead’ on the 1996 Everest disaster.

I spent the better half of July/August in Tibet, which boasts some
of the tallest peaks on Earth. Like many before me I was inspired to witness with
my own eyes what all the hype was about. But the endeavor itself in terms of the rigours
of high altitude and cold nights is a huge ask for the human body – Lhasa the main airport into Tibet sits at a stupendous
4000m; 13,123f!

For the Tibetan people, their homeland is a place of the
mighty gods taking material form at the tallest peaks in the Himalyan
(Everest), Kailash (Kailash) and Transhimalyan (Nyenchen Tanglha) ranges. For
climbers to ignore this simple fact and not to make offerings and receive
blessings in return is an error not to be made whilst in Tibet, or in neighbouring
Nepal. Climbers if truth be said live on a knife edge and
justifiably are a superstitious bunch. I suppose, as an amateur climber, I
wanted to test my mettle in one of the most raw and unbridled lands known to man. George Mallory, the first to lead a climb on Everest, when asked why he
wished to climb Everest, had quipped, “Because it is there”. We don’t know if
Mallory was successful as he never came down, but his body was later discovered by
a team led by Conrad Anker in 1999 at 26,700f on the North Face of Everest. Sometimes, the price to pay for these tall dreams is a very steep one. 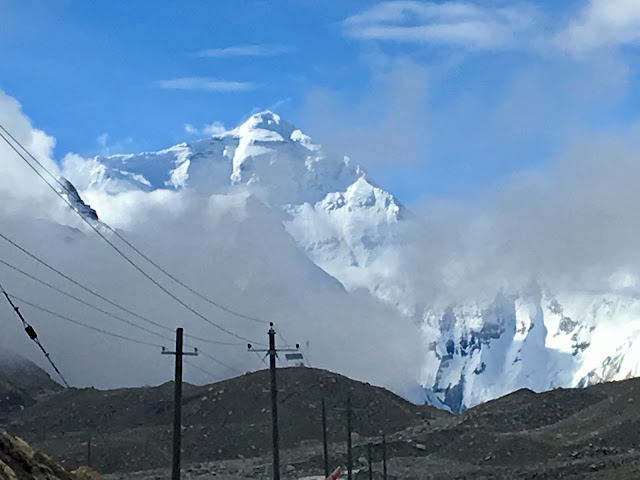 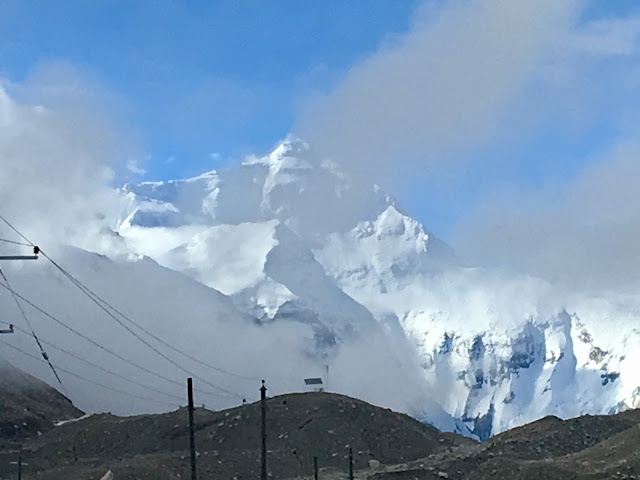 On the evening of day 4 in Tibet, I found myself with 6
others in a Yak tent at the base of Everest. July being the Monsoon season is not
a good time to climb Everest (best being May and September) and it is often hidden
from view by massive storm clouds. Although, that being said the views of Everest are supposedly better from base camp on the Tibetan side than the Nepalese side. But, luck was on my side as I discovered bright and early the following
morning whilst stepping out to brush my teeth, the weather had dramatically
changed and the whole of Everest in all her grandeur was visible to the naked
eye (see pictures)!

Miyolangsma, the Bon goddess of Everest, is believed to sit
at the peak of Everest (Everest is always called ‘she’ in deference to her). It
is to her that Tenzig Norgay, the first to summit Everest with Sir Edmund
Hillary in 1953, is said to have expressed his gratitude to when he reached the
summit. Tenzig Norgay, is said to have followed her up the mountain and that she allowed him to be the first to summit Everest. Not surprisingly, on occasions
that allow, it is not unusual to see Sherpas carry up various shrines to the
summit for blessings (see picture below). Although, compared to the 1990s and since
the commercialization of Everest, deaths on Everest have reduced, much of the
risk now is taken by Sherpa’s; with as many as one in three deaths being reported
in some years. 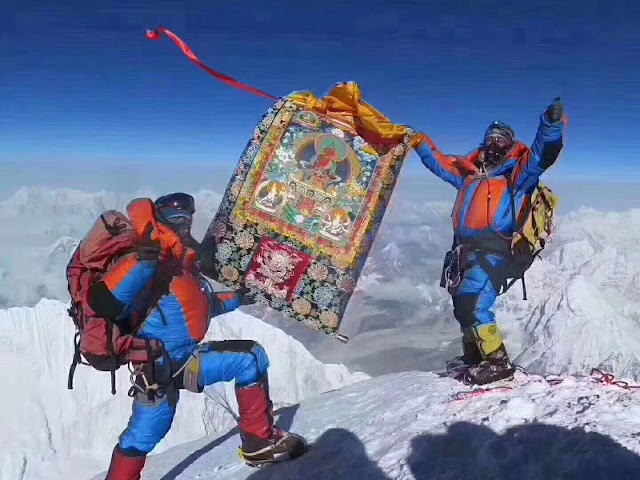 The thing I discovered about Everest is that once you’ve
clapped your eyes on it, the possibilities are rife. 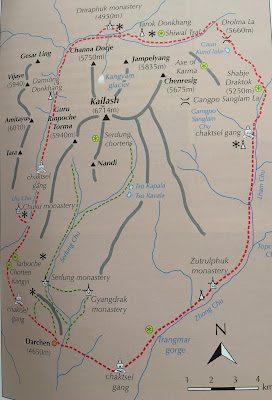 The mount Kailash kora (diagramatic representation on the left) is a circumlocution around Kailash amounting to 54km in
total. It is a religious right for four of the oldest religions in the world – Hinduism,
Buddhism, Bon and Jainism, but also performed by many tourists like myself every year. It holds special significance and is believed to be the center of the universe (the
mythical Mount Meru); its location in synchronization
with the Earth’s poles and from it stemming some of the worlds largest rivers (Sutlej on the West, Brahmaputra on the East, Indus on the North, Karnali
on the South – the largest tributary of the Ganges). Hindus believe that
Kailash is the home of Lord Shiva, the God of Destruction, and by destroying he
creates. The scripture, the Shiva Purana, says “There is no sin in the world
which cannot be destroyed by circumambulation. Hence one should dispel all sins
by circumambulation alone“.

Tensnow, Tibetan guide explaining the significance of the Kailash Kora

The pilgrimage is a dangerous and a difficult one (see
video). The mountain itself remains out of bounds for climbers, with two
permits known to be given in history by the Chinese government and both resulting in deaths. Sherpas
remain very superstitious about the mountain and would not be prepared to
support a climbing effort. The almost jewel like appearance is a spectacular
sight from any angle, but at only 6,638m (21,778f) is small compared to the other
giants of the Himalayas. The famous Italian climber Reinhold Messner was
offered a permit in the mid 1980s by the Chinese government and declined
stating “If we conquer this mountain, then we conquer something in people’s
souls”. 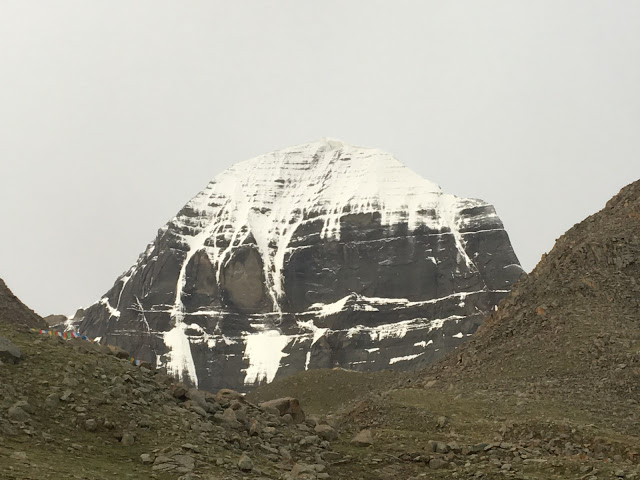 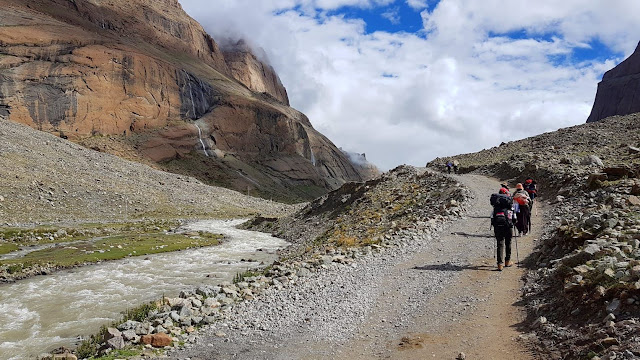 Nyenchen Tanglha range with the tallest massif at 7162m is a
protector deity of Northern Tibet from the 1800’s overlooking the very blue Namtso
Lake (which has its own associated god called Nam-tso, who rides a water
serpent). There is a pilgrim route around the lake, which takes 18 days to
circle, for the seriously devout. Tanglha range is known to westerners
following the journey by Heinrich Harrer and Peter Aufschnaiter, who crossed these
mountains to Lhasa in the 1940s as documented in Heinrich’s book ‘Seven Years
in Tibet’:  “We traveled through an
improbably beautiful landscape and came to one of the largest of the world’s
lakes – Nam Tsho or Tengri Nor. But we hardly looked at it, though we had for
long looked forward to seeing this mighty inland sea. The once-longed-for sight
could not shake us out of our apathy. The climb through the rarefied air had
left us breathless and the prospect of an ascent to 20,000 feet was paralyzing.
From time to time we looked with wonder at the still higher peaks visible from
our route”. 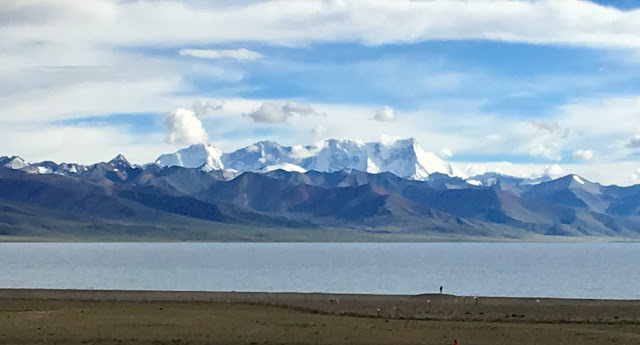 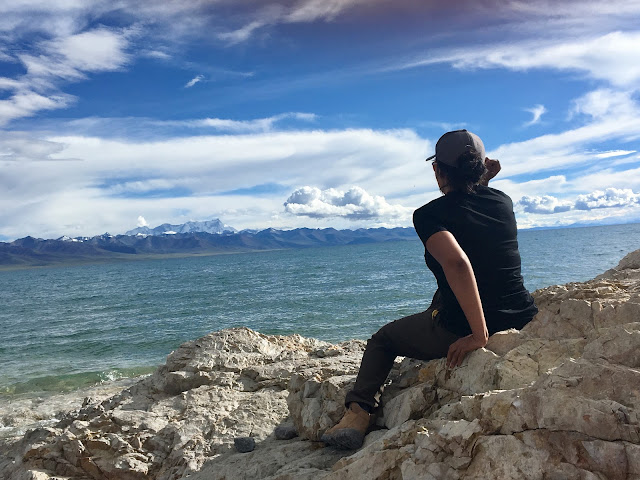 The last line by Heinrich Harrer, summarizes in a single
sentence my opinion of Tibet. Whether it was the lack of oxygen, or
the largeness of it all, but myself and my fellow travelers often found
ourselves out of our depths in this land of the Gods. This is serious alpinist territory, and if we
still had quests for heroes, this area would definitely feature as number one on my list.