Because multiple sclerosis (MS) is a chronic disease causing disability over decades, it is crucial to know if the short-term effects of disease-modifying therapies reported in randomised controlled trials reduce long-term disability. This 10-year prospective observational study of disability outcomes (Expanded Disability Status Scale (EDSS) and utility) was set up, in conjunction with a risk-sharing agreement between payers and producers, to investigate this issue.

The outcomes of the UK treated patients were compared with a modelled untreated control based on the British Columbia MS data set to assess the long-term effectiveness of these treatments. Two complementary analysis models were used: a multilevel model (MLM) and a continuous Markov model.

4862 patients with MS were eligible for the primary analysis (mean and median follow-up times 8.7 and 10 years). EDSS worsening was reduced by 28% (MLM), 7% (Markov) and 24% time-adjusted Markov in the total cohort, and by 31% (MLM) and 14% (Markov) for relapsing remitting patients. The utility worsening was reduced by 23%-24% in the total cohort and by 24%-31% in the RR patients depending on the model used. All sensitivity analyses showed a treatment effect. There was a 4-year (CI 2.7 to 5.3) delay to EDSS 6.0. An apparent waning of treatment effect with time was seen. Subgroup analyses suggested better treatment effects in those treated earlier and with lower EDSS scores.

This study supports a beneficial effect on long-term disability with first-line MS disease-modifying treatments, which is clinically meaningful. However the waning effect noted requires further study. 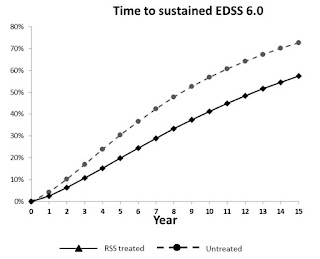 You might ask what’s the big deal? The scheme targets an era in RRMS that has now been superseded by better and faster acting MS treatments. It has also been heavily criticized for it’s non-randomized comparisons introducing bias into the assessment, the lack of power calculations to determine the number needed to treat, and last but not least despite including drugs it’s main purpose is not to determine their clinical effectiveness but establish long-term cost effectiveness. But, the powers of B need their pound of flesh, and a promise is a promise…

Armed with the uncertainty of long-term benefits of DMTs (Disease Modifying Therapies), the risk-sharing scheme authors 10y on ask how sustainable are their treatment effects? More importantly could their early treatment effect have long-term impacts on disability?

The study recruited ~ 5000 participants on interferons-betas (IFNBs) and glatiramer acetate between 2002 and 2005, and followed them up for 10y. Their efficacy was compared with natural history data of untreated individuals. The analysis of interest were two fold: 1) what was the effect of time on the outcome and 2) what was the effect of treatment on time to loss of unaided ambulation?

Two methadologies of assessing efficacy were used; one was the Markov model, which uses the annual probabilities of moving between EDSS (a measure of disability) scores (or remaining on the same score) from the values derived from the untreated individuals, and the second was the multilevel model (MLM), which uses the average trajectory for the whole population that is then applied to the baseline data of participants in the RSS to predict their EDSS progression if they had been without treatment. The latter is then compared with the observed values to estimate the absolute treatment effect.

Surprisingly, or unsuprisingly the 10y-treatment effect was a 0.61 reduction using MLM and 0.12 reduction using the Markov model in mean EDSS scores. The corresponding relative reduction in progression was 28% using MLM and 7% using the Markov model. The average time to sustained EDSS 6.0 was 12.5y vs 8.4y for untreated individuals, i.e. a delay by 4y in reaching the requirement for a walking stick (see figure above). A greater impact of treatment was observed in those with a lower disability level at the start, a shorter time from disease onset, women rather than men, those on treatment throughout rather than those who came off treatment in between, and those recruited later on in the scheme (probably because more in the early course of the disease were recruited as the study went on). Last but not least, there was treatment effect throughout the study, but it became progressively smaller as the study went on.

Around 17% of those included initially switched to highly active drugs and therefore left the study and 18% discontinued treatment, effectively excluding those on a worse disease projection from the overall analysis. Moreover, this paper doesn’t include any data on how the individual DMTs fared, which is disappointing. However, having said this the study sets the precedent for future works of this ilk and teaches us something about lessons that can only be learned the hard way.