Times are a changing folks.
Not a year ago the same type of phenotpying data was reported in the blood of people treated with DMF.
The focus has now changed, guess where.

B cells may contribute to the immunopathogenesis of multiple sclerosis (MS). Dimethyl fumarate (DMF) has recently been shown to reduce the frequency of memory B cells in blood, but it is not known whether the drug influences the cellular composition in the cerebrospinal fluid (CSF).

A cross-sectional study examining the cellular composition in blood and cerebrospinal fluid (CSF) from 10 patients treated with DMF and 18 patients receiving other disease modifying drugs or no treatment.

Patients treated with DMF had reduced proportions of memory B cells in blood compared to other MS patients (p = 0.0007), and the reduction correlated with treatment duration (rs = -0.75, p = 0.021). In the CSF, the absolute number of mononuclear cells were significantly lower in DMF-treated patients compared to the other patients (p = 0.023), and there was a disproportionate decrease of plasmablasts (p = 0.031).

The results of this exploratory study support a B-cell mediated mechanism of action for DMF in both blood and CSF.
A year ago the other authors did this and selected to focus on T cells, and CD8 T cells at that as the major cell type depleted by DMF.


Memory B cells were a close second and didn’t get a look-in.


Fastforward  a year and we have more of a focus on memory B cells. They are dropped in the blood following treatment and supports the hypothesis we and others created.


(OK I a guess it is ocrelizumab being licenced that is driving all this interest in B cells:-0)


This study looks in the CNS. In most countries, the CNS is out of bounds but the Scandinanvias are made of stern stuff and lumbar puncture studies are often done.
This study from Norway looks at the influence of dimethyl fumarate and finds that there is a drop in plasmablasts.


Memory B cells are generally the dominant subtype in the cerebrospoinal fluid and brain, but have the capacity to change into plasmablasts and plasma cells.This may reflect a maturation step due to seeing a target of interest but it may put us a step closer to thinking about progression of MS.


If we look at the data, In this study memory B cells are about 25-35% of cells in the blood but are about 75% of B cells in the spinal fluid. This wasn’t lower than other treatments and there was not a decrease in the intrathecal antibody. So maybe DMF is is not sufficiently active in the CNS.
We have recently propossed a B cell centric mechanism whereby B cells in the brain could easily become plasma blasts  and contribute to progressive MS. We would hope to see fewer cells in the brains of people treated with DMT and this study ticks that box.
Biogen did a fantastic immunophenotyping study in the blood with tecfidera ( I only saw this presented at ECTRIMS),
it would be really good if Sanofi did one on teriflunomide so we can get the data there. I’ve seen a p


One would predict it is varied to reflect the variable efficacy and not that great and maybe if used second line it might be less varied, if ProfG is right about relative efficacy second line. 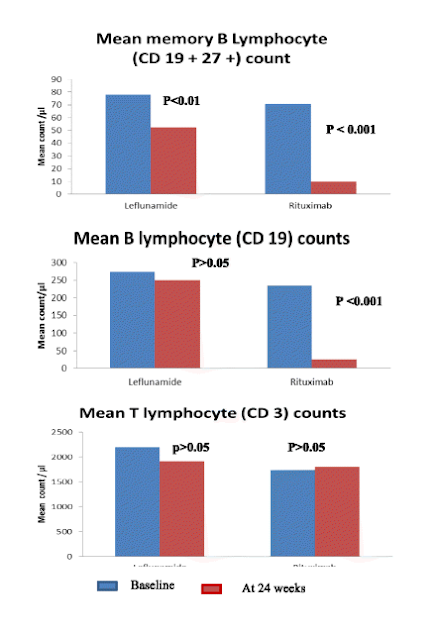 This is a hypothesis with teriflunomide, I’ld like to test. On a mean basis memory B’s will go do in absolute terms but it won’t be great


But not sure we have enough people taking the drug.