There is no doubt that some people do OK on CRAB (copaxone, rebif, avonex and betaferon) drugs, but many do not and there are a number of more effective agents out there.

Many people like the safety and the lack of monitoring requirements as “Give and forget” drugs. The lazy-risk averse neuro does not have much monitoring to do and so leaves you alone, whilst the MS monster can slowly chew up your brain reserve. We can all tolerate abit of nerve loss  and it happens to us all.  however it happens faster if your MS is not under control. Therefore “Give and forget” does not always mean “forget about your MS”. It may mean you actually “forget” as your brain reserve goes.

This is clearly seen in the ocrelizumab trial data from the extension study.


People were on beta interferon verses ocrelizumab. After two years every one switched on to ocrelizumab.


We all know that people on ocrelizumab did better and they had a slower loss of brain volume and progressed less. Once people switch from interferon to ocrelizumab, the rate of deterioration was the same, however three years on and the brain volume lost due to taking a low efficacy drug over the first too years remained.


Therefore, time is your brain. 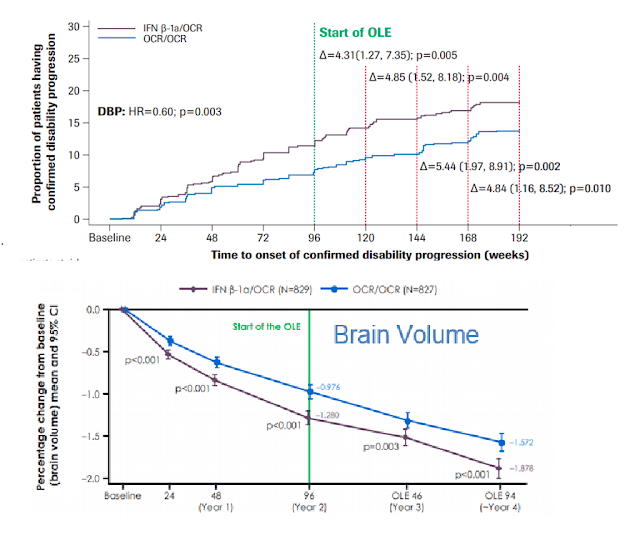 
Background: The efficacy and safety of ocrelizumab (OCR) in relapsing multiple sclerosis (RMS) were demonstrated in the 96-week double-blind control period of OPERA I and OPERA II (NCT01247324; NCT01412333), and results for the 2-year follow-up of the pooled OPERA I and OPERA II open-label extension (OLE) period have previously been reported (Hauser SL, et al. AAN 2018; Abstract P1.366).
Objective: To assess the efficacy of switching to or maintaining OCR therapy on clinical measures of disease activity and progression after 3 years of follow-up in the OLE period of the OPERA I and OPERA II Phase III trials in RMS.
Methods: At the start of the OLE period, patients continued OCR (OCR-OCR) or were switched from interferon (IFN) β-1a to OCR (IFN-OCR). Adjusted annualised relapse rate (ARR), time to onset of 24-week confirmed disability progression (CDP24) and change in adjusted mean Expanded Disability Status Scale (EDSS) score from baseline were analysed.
Results: Overall, 88.6% of patients who entered the OLE completed OLE Year 3. Among IFN-OCR patients, ARR decreased from 0.20 in the year pre-switch to 0.10, 0.08 and 0.07 at Years 1, 2 and 3 post-switch (p< 0.001, Year 1 vs pre-switch; p=0.31, Year 1 vs Year 2; p=0.56, Year 2 vs Year 3). OCR-OCR continuers maintained the low ARR through the year pre-OLE and the 3 years of the OLE period (0.13, 0.11, 0.08 and 0.07). OCR-OCR continuers versus IFN-OCR switchers had lower proportions of patients with CDP24 in the year pre-switch and Years 1, 2 and 3 of the OLE period (7.7%/12.0%, 10.1%/15.6%, 13.9%/18.1% and 16.1%/21.3%; p< 0.05, all difference comparisons). Changes in mean EDSS scores from baseline in OCR-OCR continuers versus IFN-OCR switchers will also be presented.
Conclusions: Switching from IFN to ocrelizumab after 2 years at the start of the OLE period was associated with a rapid reduction in ARR. Both OCR-OCR as well as IFN-OCR patients maintained their robust reduction in ARR through the 3-year follow-up of the OLE period. After 5 years of follow-up, the proportion of patients with disability progression was lower in patients who initiated ocrelizumab treatment earlier (OCR-OCR), compared to patients who received initial IFN treatment (IFN-OCR switchers), showing that patients who initiated ocrelizumab 2 years earlier accrued significant and sustained reductions in disability progression compared to patients switching from IFN.


Background: The efficacy and safety of ocrelizumab (OCR) in relapsing multiple sclerosis (RMS) were demonstrated in the 96-week double-blind control period (DBP) of OPERA I and OPERA II (NCT01247324; NCT01412333). Long-term brain tissue preservation is a critical objective in the treatment of multiple sclerosis (MS).


Objective: To assess brain MRI measures of disease activity and atrophy after earlier vs delayed initiation of OCR at 5 years from core study baseline in Phase III trials in RMS.


Conclusions: Patients with RMS switching at Year 2 from IFN to OCR had an almost complete and sustained suppression of MRI disease activity as measured by T1Gd+ lesions and N/ET2 lesions from Year 2 to 5. At 5 years from core study baseline, patients with 5-years’ continuous OCR treatment from randomisation experienced a lower brain atrophy as measured by change from baseline in whole brain, white matter and cortical grey matter volume compared with patients with a 2-year delayed OCR treatment start.

We still see the occassional placebo-controlled trials in relapsing MS, as the companies and regulators and the neuros associated with these studies accept that it is OK to do trials on Eastern Europeans. Whilst the trials may be cheaper to perform than in Western Europe. Alteratively the trials are performed against the least effective (Yes, the CRAB drugs) agents to show an effect of the new drug. Targeting the “low hanging fruit” (it is easy…as it is easier to pick the fruit at the bottom of a tree than the top) to beat in a trial is the current “ethical” approach to trials. It generally works although laquinimod took abit of beating when it went head to head with the CRAB…and failed

So we can ask, if it is not ethical to give nothing. Is it ethical to offer something that clearly does not stop the “MS shredder”.

A dillema, as it will be harder to find new treatments if we have to do head to head against the “big guns” (Most effective). Trials to show superiority of the new product or non-inferioity need to be large..hence expensive and slow to complete. So is this why the Western Funders (e.g. NIH) and Regulators “Give the Nod” (agree) to the placebo controlled studies.

It is not only ocrelizumab that slows brain shrinkage but other agents do it too. We know that natalizumab is very good at blocking new lesions and relapses. Does this benefit in the longer term. The Neuros from Sweden say Yes.

Background: Natalizumab, reduced relapse frequency and the risk of sustained disability progression in relapsing-remitting MS in the two-year pivotal clinical trials; however, the longer-term effectiveness of natalizumab is not established.
Objectives: To investigate the long-term effectiveness of natalizumab on physical and cognitive disability in a nationwide prospective cohort of relapsing-onset MS patients.
Methods: Patients prescribed natalizumab were followed in 58 neurology clinics across Sweden as part of a nationwide Phase 4 surveillance study. To be included persons must have had relapsing-onset disease, an MS onset after January 1st, 1995, and ≥ 12 months of natalizumab treatment. Expanded Disability Status Scale (EDSS) and symbol digit modality test (SDMT) scores were collected at baseline (initiation of natalizumab treatment), 6 and 12-months and annually thereafter. Rates of change on the EDSS, global age-related MS severity (ARMSS) and SDMT were compared between early- (treatment started ≤3 years from MS onset) and late-treated (>3 years after MS onset) patients.
Second, disability rates in all natalizumab-treated individuals were compared to historic (MS onset pre-1995) and contemporary treatment-naïve cohorts and interferon [IFN] or glatiramer acetate [GA], treated individuals, using multilevel linear mixed effects models.