Optic neuritis is a frequent finding in multiple sclerosis (MS) and in neuromyelitis optica spectrum disorder (NMOSD), as well as in Myelin-Oligodendrocyte Glycoprotein (MOG) -positive disease. While both NMOSD and MOG-antibody disease are known to be associated with a humoral, antibody-mediated attack against a specific antigen, much less is known about the etiology and pathogenesis of MS. The aim of this study was to determine if the localization of recurrent episodes of ON follows the same pattern in MS as in NMOSD and in MOG-positive recurrent ON.

We retrospectively reviewed our database to identify patients with recurrent ON. The eye affected in each episode of ON was recorded, and the findings were analyzed.

The pattern of recurrent ON differs significantly between MS and NMOSD and MOG-positive recurrent ON. This finding suggests that in MS recurrences may be provoked by previous tissue damage, disruption of the blood-brain barrier, and other local factors while in NMOSD and MOG-antibody disease attacks are indeed due to localization of the auto antigen. There once lived a disorder called optico-spinal MS, who’s origin was Asian by distinction, but a decade on its existence in Western MS was sought, and went by the name of Devic’s.

Lotan et al’s. aim was to investigate to what extent the localization of recurrent attacks of optic neuritis (ON) were similar between the disorders. Until this study, no one has paid any attention to this in MS. Whereas, in NMSOD the optic neuritis is predominantly posterior/or chiasm predominant, whilst in MOG ON they tended to involve the whole nerve/anterior predominant. As all the disorders essentially involve a pathogenic attack on antigens (although MS is believed to target more than one), there is no reason why the recurrent ON episodes should not occur at random in each eye, whether it be MS or NMSOD or MOG-MS. 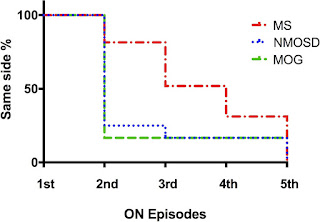 So why is MS-ON different from NMSOD and MOG-MS? Is it because the recurrent attacks become a response to previously damaged tissue? The latter may serve as inference for attacks elsewhere in the body. This work, fortunately/unfortunately, if replicated by others raises more questions about MS than we have answers for at the moment.