We have been suggesting that the activity of drugs relate to their capacity to deplete memory B cells.


A student looking at table 1, said what happened to teriflunomide?

I don’t know why I missed it.


If we look to the arthritis data, where leflunomide is a licenced drug we can see that memory B cells are depleted

Teriflunomide is the active metabolite of leflunomide, so teriflunomide must delete memory B cells


so what about teriflunomide in MS? 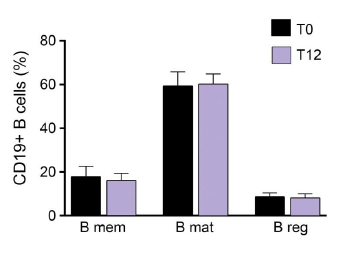 Ha Ha you say there is no difference in memory B cell (B Mem) numbers, so our idea is shot down in flames?

However I say…Ho Ho because we need to look at the absolute numbers of cells not the percentage of cells within the B cell pool and whilst there is no change in the proportions of memory B cells after teriflunomide treatment, there is a decrease (40-50%) in the absolute number of B cells 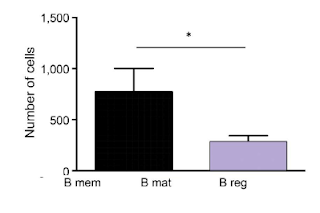 Therefore the absolute numbers of  memory B cells drop by 40-50%.

Phew a narrow squiek, but the drop in B cells is not in the same league as cladribine and alemtuzumab (80-90%) , so this would suggest teriflunomide would be a low efficacy drug.

However we know this already, but it is good to have the idea of hierachical efficacy of drugs relating to depletion capacity confirmed.

Demonstrating this with cladribine was another excellent example


So what happenes when you switch from a CRAB to teri or dimethyl fumarate?

BACKGROUND: Previous real-world comparative research of MS disease modifying therapies (DMTs) in the overall population has suggested dimethyl fumarate (DMF) to be comparable to fingolimod (FTY) and more efficacious than teriflunomide (TERI) in reducing relapses. However, there is limited comparative evidence in patients switching from platform DMTs in the US. The objective of the study was to compare the annualized relapse rate (ARR) and risk of relapse in MS patients who have switched from a platform therapy to DMF, FTY, or TERI.
METHODS: MS patients (18-65 years old) initiating an oral DMT from June 2013 to March 2015 were identified from the Truven MarketScan®Commercial Claims Database. The index date was the date of first oral DMT fill. Patients were required to have: continuous enrollment in the database for 12 months pre-index date and ≥3 months post-index date; ≥1 MS diagnosis over the pre-index period; discontinuation of a platform DMT with no evidence of oral or infusion DMTs over the pre-index period; and adherence to the index drug for ≥90 days. DMF patients were propensity-score matched (PSM) 3:1 to FTY and to TERI based on age, gender, region, a claims-based MS severity measure, ARR, and number of hospitalizations over the pre-index period. Patients were censored when they dropped out of the database or at the end of the study period (March 31, 2016). Post-index relapses were annualized.
RESULTS: The database included 20,311 oral DMT users. After applying the study criteria, the PSM yielded 1602:534 switch patients for the DMF-FTY matched cohort. DMF-FTY patients were well-matched on all covariates: age (mean = 44 for both), gender (28% vs. 26% male, respectively), MS severity measure (0.99 vs. 1.08), and baseline ARR (0.40 vs. 0.44). PSM yielded 833:279 switch patients for the DMF-TERI match. DMF-TERI patients were well-matched on all covariates: age (mean = 50), gender (24% vs. 25% male), MS severity measure (0.86 vs. 0.99), and baseline ARR (0.23 vs. 0.30). The standardized differences confirmed balance across all covariates for matched cohorts.
Now the Result
The matched DMF-FTY cohorts had comparable post-index ARR (Rate Ratio [RR] = 1.07 [95% Cl: 0.861, 1.328]) and risk of relapse (Hazard Ratio [HR ]= 0.996 [95% CI: 0.803, 1.236]).
So switch to dimethyl fumarate and fingolimod and the risk of future relapse was the same, so they have comparative efficacy in the real world escalation
Post-index ARR was significantly lower with DMF in comparison to TERI (RR = 0.667 [0.486, 0.914]). The risk of relapse was also significantly lower when switching to DMF than TERI (HR = 0.679 [0.503, 0.917]).
So if you switch t teriflunomide after a CRAB your chances of a relapse are about 30% higher than if you switch to dimethyl fumarate (or fingolimod)
CONCLUSION:In this analysis, the effectiveness profiles for those oral DMT users specifically switching from platform therapies are consistent with findings from previous research conducted among all oral DMT users, regardless of prior therapy.


So teriflunomide isn’t that great even if it is not used first line, time is brain, why waste it.


CoI: Multiple but not relevant