I don’t usually do “Cure of the Week”, where someone treats a mouse and it somehow becomes the next great hope for MS.

DrK sparked my interest by a twitter post
Cronin SJ et al. The metabolite BH4 controls T cell proliferation in autoimmunity and cancer Nature 10.1038/s41586-018-0701-2.
Genetic regulators and environmental stimuli modulate T cell activation in autoimmunity and cancer. The enzyme co-factor tetrahydrobiopterin (BH4) is involved in the production of monoamine neurotransmitters, the generation of nitric oxide, and pain. Here we uncover a link between these processes, identifying a fundamental role for BH4 in T cell biology. We find that genetic inactivation of GTP cyclohydrolase 1 (GCH1, the rate-limiting enzyme in the synthesis of BH4) and inhibition of sepiapterin reductase (the terminal enzyme in the synthetic pathway for BH4) severely impair the proliferation of mature mouse and human T cells. BH4 production in activated T cells is linked to alterations in iron metabolism and mitochondrial bioenergetics. In vivo blockade of BH4 synthesis abrogates T-cell-mediated autoimmunity and allergic inflammation, and enhancing BH4 levels through GCH1 overexpression augments responses by CD4- and CD8-expressing T cells, increasing their anti-tumour activity in vivo. Administration of BH4 to mice markedly reduces tumour growth and expands the population of intratumoral effector T cells. Kynurenine—a tryptophan metabolite that blocks antitumour immunity—inhibits T cell proliferation in a manner that can be rescued by BH4. Finally, we report the development of a potent SPR antagonist for possible clinical use. Our data uncover GCH1, SPR and their downstream metabolite BH4 as critical regulators of T cell biology that can be readily manipulated to either block autoimmunity or enhance anticancer immunity.

Tetrahydrobiopterin (BH4, THB), also known as sapropterin, is a cofactor of the three aromatic amino acid hydroxylase enzymes,used in the degradation of amino acid phenylalanine and in the biosynthesis of the neurotransmitters serotonin (5-hydroxytryptamine, 5-HT), melatonin, dopamine, norepinephrine (noradrenaline), epinephrine (adrenaline), and is a cofactor for the production of nitric oxide (NO) by the nitric oxide synthases.Tryptophan hydroxylase (TPH) for the conversion of L-tryptophan (TRP) to 5-hydroxytryptophan (5-HTP) and we know that tryptophan metabolites can has been linked to the biology of MS and they inhibit EAE.

It was shown that BH4 is required for the effective proliferation of mature T cells in vitro and in vivo, and that this is mechanistically linked to iron metabolism and mitochondrial respiration. They inhibited T cell activity with an inhibitor of Sepiapterin reductase to inhibit BH4 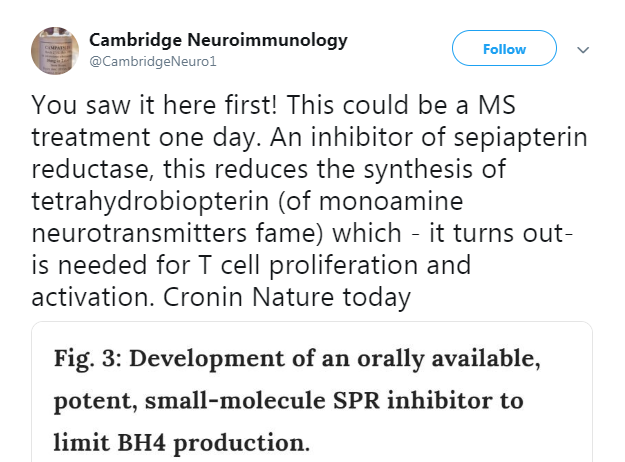 So you saw it here second…


There will be all sorts of side effects


What else does the distribution say? Back to Wiki

So Sepiapterin reductase is hardly expressed by lymphocytes and it is relatively ubiqitous and so there will be lots of potential for side-effects. Next there is massive expression on the heart (alarm bells may start to ring here) lung and kidney. So it is a good candidate.
To treat MS, I doubt it?


Does it effect B cells after all:-)