Twelve MS patients were recruited and divided according to their disease activity into active and non-active groups. All participants underwent neurological examination, neuropsychological testing, lumbar puncture, brain magnetic resonance (MRI) imaging, and 18F-florbetapir PET. Aβ levels were determined in CSF samples from all patients. MRI and PET images were co-registered, and mean standardized uptake values (SUV) were calculated for each patient in the NAWM and in the DWM. To calculate brain volumes, brain segmentation was performed using statistical parametric mapping software. Nonparametric statistical analyses for between-group comparisons and regression analyses were conducted.

The correlation between CSF Aβ levels and NAWM-SUV suggests that the predictive role of β-amyloid may be linked to early myelin damage and may reflect disease activity and clinical progression. 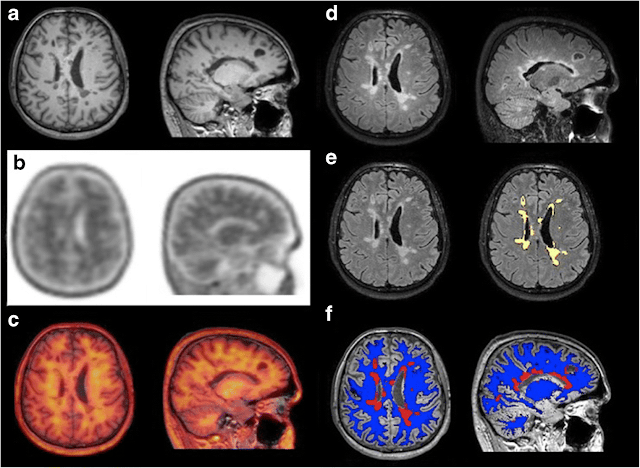 
Traditionally, majority of us when we hear the terms Aβ or PET imaging (positron emission tomography; developed to image amyloid deposition), we immediately think of the dementia disorders, such as, Alzheimer’s disease. However, PET imaging has recently also been repurposed as an imaging marker in MS to study myelin loss and repair, utilizing its non-specific binding to the white matter – where demyelination (loss of myelin) leads to a reduction in uptake. Not surprisingly, it may be a more sensitive marker of acute white matter lesions than conventional MRI.

As expected, they found that amyloid uptake in the largest white matter MS lesion for each participant was reduced compared to their normal appearing white matter; confirming its usefulness as a marker of myelin loss (this finding has been confirmed by other investigators also and is not a new finding). However, the tracer uptake was reduced in those with active disease than in non-active participants, suggesting that white matter myelin is damaged during the early course of disease activation. Moreover, this reduced uptake was not only visible in the diseased white matter but also in the normal appearing white matter – it is not unusual in pathology studies to see immune activity even in macroscopically normal looking brain!


Overall, a nice piece of work. But one of the major limitations of PET, in my opinion, is the cost of PET relative to MRI alone. Moreover, CSF Aβ, aside from performing a lumbar puncture, is again a fraction of this cost and one can measure several other biomarkers in tandem if necessary.