Background : Integration of robotics and upper limb rehabilitation in people with multiple sclerosis (PwMS) has rarely been investigated.

Results: There were no significant between-group differences in primary and secondary outcomes. Electromyography showed relevant changes providing evidence increased activity in the extensor carpi at T1 and T2. 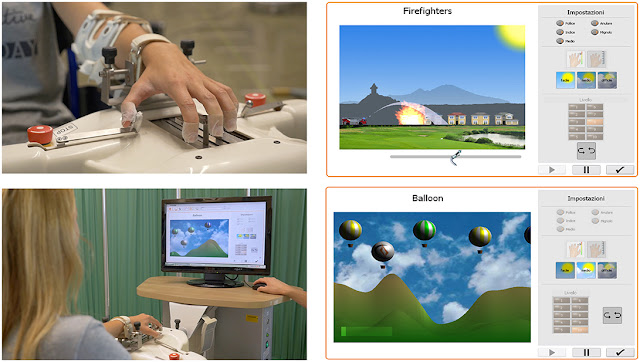 The thing I love about science is its philosophy, its expandable capacity to dream beyond the metaphysical and push the limits. The introduction of robotics and AI into society, however, has been received by society with conflicting valuation. Some bad, for instance the introduction of automative robots in the car manufacturing industry, while some have been good, for example, robot assisted-surgery in medicine. But, do robotics have a place in disability management and rehabilitation?

Here, Gandolfi et al. have focused on robot-assisted devices for upper limb impairment in MS, which affects 66% of those with MS over three decades of the illness. Early use of similar devices have proved to be helpful following acute stroke. But MS is much more slowly progressive and may prove to be difficult. They used Amadeo®, a mechatronic end-motor robotic device, i.e. it targets hand function simulating natural grasping movements and carries out automated movement sequences. If we apply the ‘use it or lose it’ hypothesis, it is conceivable that Amadeo®-assisted hand rehabilitation can reduce hand motor impairment, whilst at the same time improving its use.

The team compared the effects of Amadeo®-assisted training and robot-unassisted training on upper limb function. As well as evaluating the training effects on hand dexterity and upper limb function, disability improvement and quality of life. To look at the mechanics of this, they evaluated whether there was improvement in muscle function by measuring electromyographic activity in the upper limb. It’s a single blind study where only the examiner was blinded to the treatment groups and outcomes were evaluated before and after a 5 week training session, and at 1 month follow up.

Unfortunately, they didn’t find any significant differences between the two groups in improvement in upper-limb function. But, in the secondary outcomes, only the robot-assisted group reported a change in the motor-activity log-amount of use (a scale evaluating changes in the amount and quality of arm use in carrying out 30 daily activities), and after training only this group demonstrated improvements in muscle strength during finger-extension and flexion. This was supported by an increase in extensor carpi (muscles that extend the hand at the wrist) activity similar to activation in healthy controls (i.e. those without MS). These changes were maintained at one month follow up.

So there is something to take forward here, in the same we exercise our lower limb when there is not enough strength, robotic assistance may help with those unable to accomplish this. As demonstrated in this work, the improvement in extensor carpi muscle activation support a task-specific effect of this device on underlying muscle activity.