A favourite mechanism of action(MOA) of the inventors was that Glatiramer acetate induced a GA reactive Th2 response.. 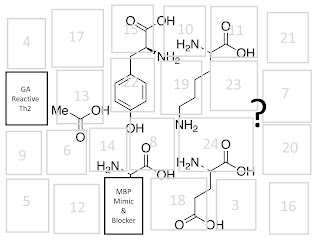 Chen M, Gran B, Costello K, Johnson K, Martin R, Dhib-Jalbut S. Glatiramer acetate induces a Th2-biased response and crossreactivity with myelin basic protein in patients with MS.Mult Scler. 2001;7(4):209-19.This MOA was of course before T regulatory cells came along and kind of says the Th2 idea was rather rubbish.

“Response to therapy” I answer.


If GA produces a Th2 response, then as GA is only modestly effective  then it says the influence of driving a Th2 response is only going to be modest. You can’t have it both ways.

Then there are the studies in mice that lacks IL-4 and IL-10 and so don’t make Th2 cells but GA still has activity in the beasties. So is it really Th2?