On the third day of December my true MD gave to me…no not a partridge in a pear tree but…..
Three memory B cells
Two GA reactive Th2 T cells
and a myelin basic protein sending us up a dead-end tree.

Today we have the next mechanism of action of Glaterimer acetate and it is depletion of memory B cells. 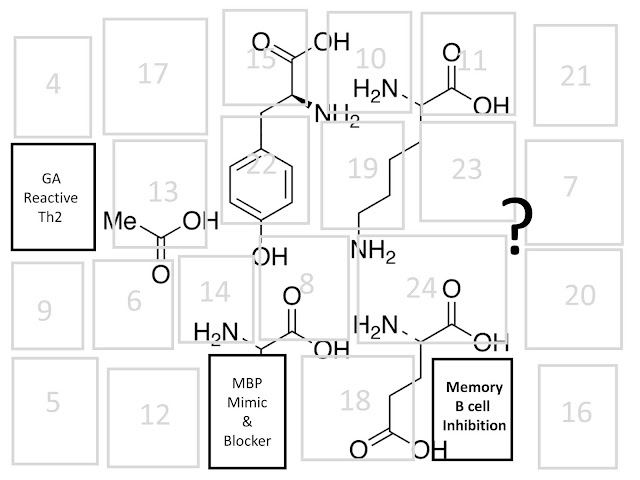 Growing evidence indicates that B cells play a key role in the pathogenesis of multiple sclerosis (MS). B cells occupy distinct central nervous system (CNS) compartments in MS, including the cerebrospinal fluid and white matter lesions. Also, it is now known that, in addition to entering the CNS, B cells can circulate into the periphery via a functional lymphatic system. Data suggest that the role of B cells in MS mainly involves their in situ activation in demyelinating lesions, leading to altered pro- and anti-inflammatory cytokine secretion, and a highly effective antigen-presenting cell function, resulting in activation of memory or naïve T cells. Clinically, B cell-depleting agents show significant efficacy in MS. In addition, many disease-modifying therapies (DMTs) traditionally understood to target T cells are now known to influence B cell number and function. One of the earliest DMTs to be developed, glatiramer acetate(GA), has been shown to reduce the total frequency of B cells, plasmablasts, and memory B cells. It also appears to promote a shift toward reduced inflammation by increasing anti-inflammatory cytokine release and/or reducing pro-inflammatory cytokine release by B cells. In the authors’ opinion, this may be mediated by cross-reactivity of B cell receptors for GA with antigen (possibly myelin basic protein) expressed in the MS lesion. More research is required to further characterize the role of B cells and their bidirectional trafficking in the pathogenesis of MS. This may uncover novel targets for MS treatments and facilitate the development of B cell biomarkers of drug response.


B cells and MS
But the main primary data comes from

“The percentage of total CD19+ B cells was decreased in patients receiving glatiramer acetate, but levels of naive CD27-IgD+ B cells were elevated in that group compared with a larger cohort of healthy donors and treatment-naive patients” 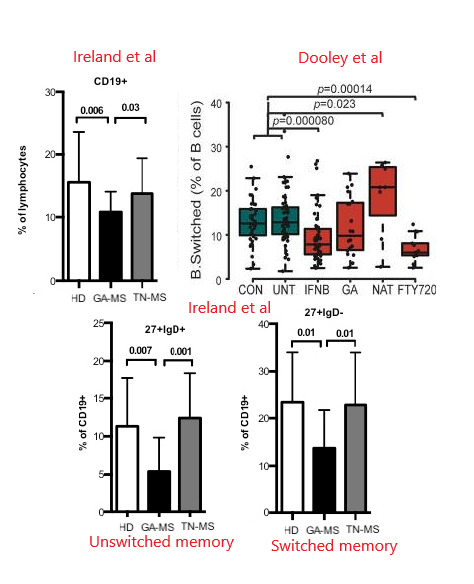 
So if we look the the memory B cells appear to drop about 40-50%. This is OK but this is hardly the 80-90% with cladribine and alemtuzumab.  Then there is the blip and if we look at Dooley et al.


There was a decrease but it was not significantly different.

Yep GA may not be that great at depleting memory B cells and this is the important point.

GA is not that great at inhibiting relapsing MS, so the mechanism that targets MS is not going to be inhibited much, yet this aspect is forgotten when the “mechanism of the month” occurs.

The memory B cells may act by affecting antigen presentation


A number of  double-blind, placebo-controlled trials have shown that glatiramer acetate (GA) is effective in reducing relapse rate  and reduced it by about 30%pwMS with relapsing-remitting (RR) multiple sclerosis (MS).

But the clinical effect is modest and the results from animal studies are relatively weak also.


I know you dont want the next twenty-one days discussing this agent and its endless stream of mechanisms , some of which may be related.


There are loads of them

But if it has so many mechanisms of action with beneficial
effects, the response to therapy should be better 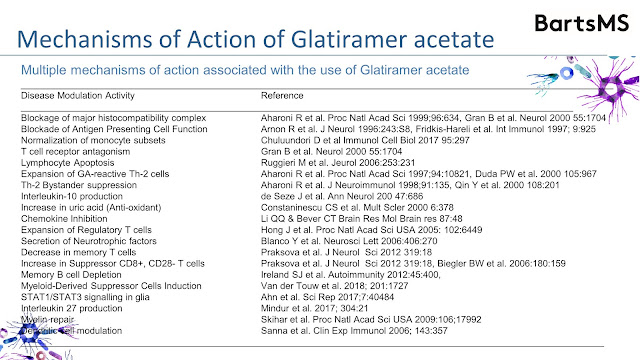