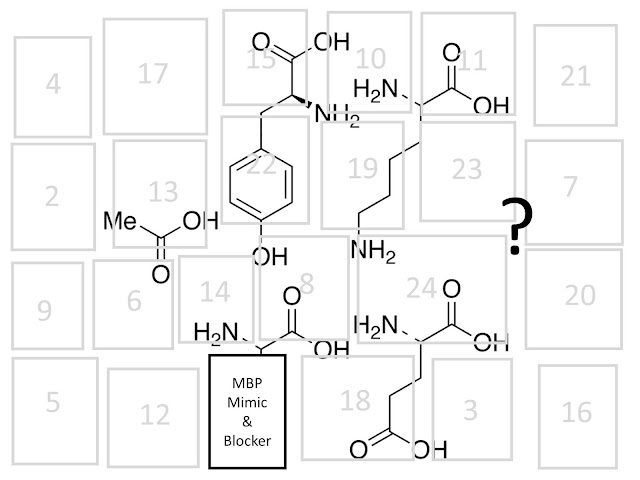 I don’t know. It can’t be because of efficacy, as it is not a high efficacy agent and perhaps has one of the lowest levels of efficacy based on relapse rate. I guess it is based on low side effects.
However, as to the logic that this agent mimics myelin basic protein, I am not sure I buy this. I guess first up although autoimmunity occurs in MS, there is no definite evidence that autoimmunity is the primary problem.
There are only twenty amino acids and GA contains four of them. These four amino peptides will be found in hundreds of proteins and so why MBP?
The answer is simple I think….. Lazy T cell immunologists.
As soon as EAE came along and the thought that MS was autoimmune, you are looking for an autoantigen and so let’s choose the one we can make and work with.
MBP is a common protein in the CNS and it dissolves in water and so is easy to work with and you can find T cells that respond to it and it they do you can get EAE, or if you are a rabbit you can get EAE and EAN. EAE = experimental autoimmune encephalomyelitis and so a disease of the brain and spinal cord, but EAN = neuritis and a disease of the peripheral nerve and so it is expressed in peripheral nerves and this is the second problem with the molecule. This means that if MS was targeted to this molecule there would be a lot of poly-neuropathy with disease of the brain and the spinal cord and the peripheral nerves. However MS is largely targeted to the central nervous system. This casts some doubt on the MBP story.
However, some animals do get CNS restricted disease when they become sensitised to it , but not the beasty I prefer to work with, the response to MBP is pants and they respond to proteolipid protein which is the major protein in the central nervous system but being a proteolipid it is not water soluble and is like brick dust in that it doesn’t dissolve in water and in fact it is so lipid soluble it will stick itself into cell membranes and can become toxic to lymphocytes and so it is no good for doing T cell work…..Phew. I never grew up loving Th1 Th2 or Th17 for this reason and so was not wedded to any single, simple idea that I had to follow like a lemming.
Anyway back to MS and MBP. There have been numerous trials in an attempt to tolerise the immune response aginst MBP in the hope that MS would go away. They all failed, over and over and over again trial after trial. Now, I could say that these failures show that MS has nothing to do with MBP.
Whilst this may be true the trials were in my opinion doomed to fail because the ideas on which the trials were based were flawed. The trial design was definitely flawed. I remember saying to the people doing an intravenous MBP study in MS that they were wasting their time and their money. The company is now on the rubbish heap. MBP a bad choice, but that’s not it, they decided to do their trials in SPMS. Removing the immune system does not stop SPMS at least quickly so the trial was doomed.
Next up to get intravenous tolerance to work properly in my opinion, you have to first deplete the immune cells and tolerise them as they repopulate. Not done and another reason for a trial failure. Unpersuaded other companies are doing the same thing and again failures will appear, I suspect.
Then there are other companies sticking MBP into the skin as we speak. Immunology tells us this is a sensitizing route not a tolerogenic route, I wonder what will happen. I will keep an open mind but I have serious doubts.
Then there was the MBP altered peptides aimed at making a TH1 into a TH2 cell and what happened? Disaster two trials failed. Nature paper for the trial failure report and then a Nature paper for the reason why the trial failed as it caused allergy. So they did a two year trial rather than a three week EAE experiment to get that result em:-( However the other trial didn’t fail for the allergy it failed because it made MS worse. You don’t want Th1 or Th2 they are both bad news.
Anyway this is the only bit of info that really links MBP to be an autoantigen in MS. Put an MBP under the skin (a sensitizing route) and you get worse MS. However some of the people got polyneuropathy…yep because MBP is found in the central and peripheral nervous system. Worse of all the idea was that the TH1 to Th2 switch was based on expression of a molecule called DR2. The people in the trial were not screened and some of the people I think were DR4 and rather than a Th1 to Th2 switch you got stimulation of TH1 so a paper for that explanation too. Is this the evidence that MBP is a problem for MS.
Anyway now I have pulled the rug under the MBP story, what of GA? Well we had it working in a system that doesn’t respond to MBP and other people showed it worked in non-MBP EAE  too and them some people report that it does its stuff in non-MS conditions so out goes the idea of MBP in my mind. Would it work to stop other autoimmune conditions…
How does it work, I don’t know….next idea.
COI Multiple but not relevant