Of course not they want a treatment option, just as you do, but I feel we have been shooting ourselves in the foot and unfortunately this mistake means a bullet to your brain. 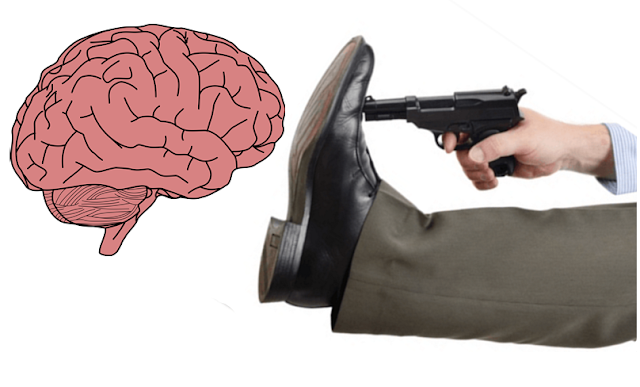 The question is can we learn from these mistakes?
MS-SMART in hindsight appears not so smart as we have backed three losers. So whilst the neuros pat themselves on the back for a trial well done (yes it was a fantastic effort by UK neuros to deliver the result..it would not have happened so smoothly in other countries), it doesn’t really help you.

But it also says to you that you need to wait until the trials are done before putting yourselves at risk from unproven therapies.

However, there may have been one winner and three losers as Ibudilast had some effect in secondary progressive MS. This is a anti-asthma drug that have been used in Japan for years.

This positive effect was perhaps based on luck and prior knowledge rather than brain power (I may be chastised for voicing this opinion). Why do I say this?

As I have said before, Ibudilast is a phosphodiesterase 4 inhibitor that blocks TNF.

Pentoxyfilline and rolipram (both PDE4 inhibitors that also block TNF) had already failed in MS and rolipram appeared to worsen events just as infliximab and etanicept (TNF blockers). Ibudilast failed in relapsing MS too.

However, there was a signal that it affected brain atrophy in the failed relapsing MS trial. This happened with laquinimod too. A few million pounds later and the laquinimod trial in progressive MS failed. The Ibudilast trial showed some success.

What is the difference? Perhaps they were lucky and maybe people in the trial were at a stage where MS would not reactivate or was it because Ibudilast inhibits macrophage function and we believe that macrophages/microglial are important.

However, there was data in MS that it could work.

If we go back to MS-SMART, riluzol, fluoxetine and amiloride have fallen. I must admit I thought that fluoxetine and riluzol would fall, because they both had a trial failure between the study starting and finishing. I was most hopeful that Amiloride would make it, but it too fell in the optic neuritis trial during the period of the MS SMART trial. This was doomed also because…between the planning and the finishing, data emerged that the damage is done within a month and that you need to get on treatment quickly for it to have a chance of it working and so in the trial people were not going to get on drug quick enough.

As we had made the idea for the optic neuritis trial on sodium channel blockers, we knew this and so people had to be on drug within 2 weeks and we managed for it to be within 7-8 days and trial worked. However, there is a real question mark about whether amiloride gets in the brain in humans. Some says it doesn’t because it is too water soluble and so can’t get through cell membranes. Now you can always push the dose in animals to get it in and the animal experiments used a dose highly in excess of the human dose, which was not much below a lethal mouse dose. The human dosing is designed to affect kidney function not brain function so was it SMART?

Is brain atrophy the best MRI measure to advancing MS.

I am not so sure, as it is liable to artifact because a good anti-inflammatory can get rid of swelling causing the brain to shrink so a trial would fail because the drug was working. This killed off lamotrigine, so we have not learned from this. Will it kill of Biotin also as this failed in brain atrophy. 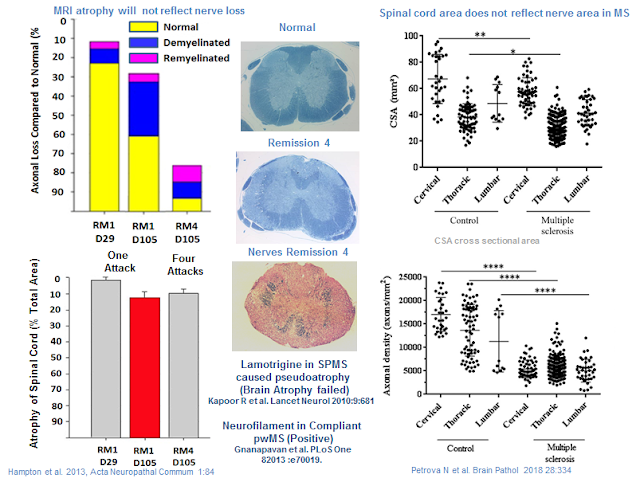 Look at the mouse data counting nerves in mice after one attack (RM1) and four attacks (RM4) you can see that once the nerves take the hit from the attack it takes time for nerves to go but with attacks nerves are lost in this case about 80% loss. Now look at the size of the spinal cord and you can see that it does not change much, therefore brain atrophy which is measuring total loss is missing most of the action. If you look at the blue in the spinal cord section you can see that there is myelin loss but the size is not shrinking because the loss of nerves is being replaced by the scar. There is loss of nerves (black in the bottom picture). So will brain atrophy be fit for purpose?

However, the artificial shrinkage in brain atrophy occurs early and as seen in the lamotrigine the shrinkage due to nerve loss in the control group will eventually overtake the the treatment group, but means the studies have to be more long-term catch up

What about other treatments
Eisele P, Szabo K, Ebert A, Platten M, Gass A. Brain Atrophy in Natalizumab-treated Patients with Multiple Sclerosis: A 5-year Retrospective Study. J Neuroimaging. 2018. doi: 10.1111/jon.12586. [Epub ahead of print]
BACKGROUND AND PURPOSE: Studies demonstrated a higher brain volume loss in the first year after initiation of natalizumab treatment than in the second year, but the experiences beyond 24 months are scarce until now. We investigated the evolution of brain volume changes in multiple sclerosis (MS) patients receiving natalizumab for at least 60 months.
METHODS: Using annual 3-dimensional magnetization-prepared rapid acquisition gradient-echo (MPRAGE) sequences acquired on a 3 Tesla magnetic resonance imaging (MRI), we investigated percentage brain volume changes (PBVCs) in 10 MS patients (9 women, mean age at baseline MRI = 29 ± 9 years; median Expanded Disability Status Scale = 2 ± 1.5; mean disease duration = 6 ± 5 years) after 12, 24, 36, 48, and 60 months.
RESULTS: PBVCs were statistically higher during the first 12 months (-1.48 ± 1.05%) when compared to 12-24 months (-.6 ± .61%; P < .05), but not between 12-24 and 24-36 months (-.43 ± .54%), 24-36 and 36-48 months (-.28 ± .49%), and 36-48 and 48-60 months (-.33 ± .49%; P > .05 for all comparisons).
CONCLUSION: Our results contribute to the increasing knowledge of PBVCs in natalizumab-treated MS patients. Our data suggests that after a significant PBVC decrease in the first year, brain atrophy rates show a slowdown during long-term follow-up.


So as we said potent anti-inflammatories cause a pseudoatrophy, but shows what the clinical and biomarker studies show that natalizumab is of some use in secondary progressive MS. In the trial it failed to affect EDSS in the two year trial. However if you took this out to 3 years you started to see an effect. So the trial design was not good enough, it needed to be longer. Then there was the hand function and there was significant effect but because it was not a primary outcome the trial failed . So if hand function had been the primary outcome it won’t have been a failure and you would of had another treatment option. So neuros kill MS drugs,  by designing trials that don’t work.

Am I wrong to voice this concern? As a recipient of a failed trial when all the science said the trial should have worked, only to find out the trial was loaded with people who did not respond. Yes this is not what you want to hear. But should I shut up about things like this?

This is the therapeutic lag effect. it takes about 3 months to see an effect on MRI imaging in relapsing MS and looks like it takes 2-3 years for an effect in secondary progressive MS. We learn by our mistakes but it takes years. I am sorry for our failings. However ProfG and others learned from the failed rituximab trial in PPMS, that is why you now have ocrelizumab.